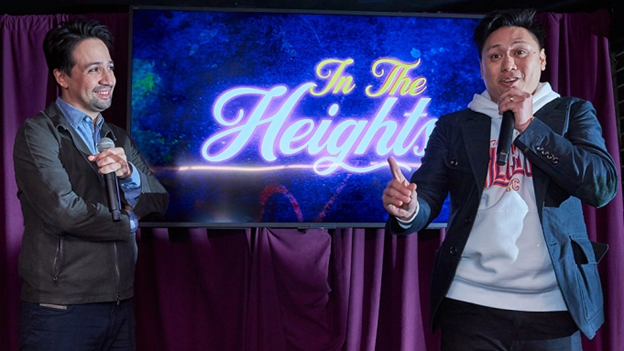 Lin-Manuel Miranda | IN THE HEIGHTS

Reel 2 Real on June 14, 2021 0Likes At The Movies
ShareTwitterFacebookInstagram

Just under a year ago, fans of Lin-Manuel Miranda’s beloved Broadway musical “Hamilton” were able to enjoy the Broadway hit from the comfort of their homes. The show was recorded as it was performed on stage, and uploaded to Disney Plus, where it was extremely successful. According to analytics, the musical saw 2.86 million streams within its first twelve days on the platform.

Now audiences can see more of Miranda’s work on-screen with the release of the movie “In the Heights.” In the Heights began as a Broadway musical created by Miranda and debuted in 2008. After the success of Hamilton, Miranda’s second musical, the possibility of an In the Heights movie was born.

Unlike the Hamilton release on Disney Plus, the In the Heights movie will not be a direct release of a recorded stage performance and will instead be a musical drama film that follows the same plot of the Broadway show.

With musical stage-to-musical film depictions feeling more infrequent in today’s theaters, compared to decades that have passed, it is easy to wonder how these films are made while keeping the integrity of the live shows. Is this something that directors in Hollywood are still capable of doing? Jon M. Chu may end up being the director to answer that question as we will finally get to see how he handled Miranda’s beloved In the Heights.

Chu is likely most recognized for his directorial work in “Crazy Rich Asians,” which was released in 2018. However, his first major movie was originally supposed to be a film depiction of the musical “Bye Bye Birdie” with Sony Pictures. This project never took off due to budget concerns. Chu is also directing Universal Studios’ “Wicked” movie, which has seen a large number of delays. While we are yet to see any success come from either of these movies, one thing is clear: Hollywood seems to trust Chu to turn these wildly popular musicals into movies.

Part of the reason this may be is because Chu has proven that he is quite familiar with two especially important aspects of musicals: music and dancing. Chu is no stranger to including the art of dance in his films, being a member of a dance crew himself. He was also the director of two movies that featured Justin Beiber in the early 2010s. The first of these two films, “Justin Bieber: Never Say Never,” made around $99 million at the box office on just a $13 million budget, proving Chu could bring in money when it came to movies focused on music.

The two Justin Bieber movies that Chu directed may have seen a lot of success in the box office, but they certainly did not do well with critics. Both films sit under a 2/10 in their overall IMDb ratings.

Chu also saw average ratings in two other movies that he directed: “Step Up 2: The Streets” and “Step Up 3D.” Both movies focused on dance and music, again adding to the resume that landed Chu as the director of In the Heights.

Step Up 2: The Streets saw a 6.2/10 rating on IMDb and 28% on Rotten Tomatoes. Step Up 3D did slightly better on Rotten Tomatoes, reaching a 47% score. It matched the same score as its predecessor on IMDb. While these scores are not inherently terrible, the question remains: would die hard musical fans be okay with this quality of a film which represents their favorite show?

These scores do not mark Chu as a critical failure though. His most recent movie, Crazy Rich Asians, won four awards including a Critics Choice Movie Award for Best Comedy. The movie also sits at a high 91% on Rotten Tomatoes. On top of this, it brought in $238.5 million with a $30 million budget. The only problem is that Crazy Rich Asians was a romantic comedy, not a pre- established beloved Broadway hit.

What does all of this prove? Chu can clearly bring in the money, he proved that with his Justin Bieber documentaries that came out while the popstar was on the rise. The only stain on that financial success is that those movies scored very poorly critically. Chu rose above those rough ratings when he directed Crazy Rich Asians in 2018 and brought home four different awards. He has yet to prove this success with a musical, but studios are already putting him at the helm of film adaptations of some of the most successful and modern Broadway shows. In the Heights will be the first Broadway-to-big-screen transition that we see from Chu. This weekend, as the movie is released, we will learn if he could continue bringing the stage to our sofas or if he is a director caught up in the struggle of transitioning musicals to movies.