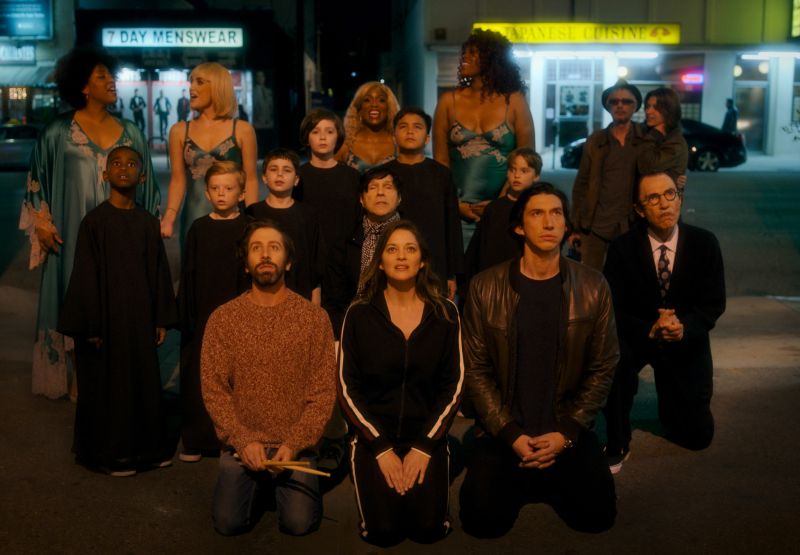 Musical films feel like they have had a revival of sorts in recent years, especially with the growing popularity of Lin-Manuel Miranda who is known for “Hamilton” and “In The Heights.” “Annette” brings a unique flair to the table (or genre). It is a darker and more mature musical by Leos Carax that wears many hats, such as a Shakespearian-like tragedy, horror film, and a grand musical. Like the recent release “The Green Knight,” it surely won’t resonate with all, but those that enjoy grand musical numbers with backdrops that allow you to escape will find enjoyment in it. Annette is a film that is uniquely both beautiful and tragic and hits just the right notes on its way to the crescendo.

In an attempt to give a synopsis for the film, celebrity couple Henry (Driver), stand-up comedian, and his wife Ann (Cotillard), an opera singer, have a child, which begins a tumultuous turn for their relationship.

There is a lot to unpack from “Annette.” After all, it nearly reaches two and a half hours with its runtime, and it feels impossible to fully understand Carax’s film in one viewing. From commentary on cancel culture, to the stars losing their shine, each story beat feels familiar yet simultaneously unique. Leos Carax also finds a way to balance numerous genres. There are a number of strange moments in “Annette” that feel like they have David Lynch’s fingerprints all over them, with none being more evident than the scene where Driver is driving down the country roads on his motorbike and an image montage floods the screen on top of Driver’s character driving on-screen. The titular character of Annette is a doll (for the most part), and is also a strange-looking mechanism to say the least. The somewhat cute face makes up for the creepy animatronic movements that Chucky the doll has made famous. It’s like a weird cross between Baby Yoda and the doll from “American Sniper.” After one character passes away, that character decides to haunt their spouse sporadically throughout the rest of the film. This type of shift in tone in the second half may not work for every film, but it works here because of the quirkiness of the film to begin with. It’s realistic without being completely tied down to the conventions of our world.

Adam Driver has had an astonishing career thus far. It wasn’t until about a decade ago that he had his first acting credit in Clint Eastwood’s “J. Edgar.” He then continued to star in films by Noah Baumbach, Steven Spielberg, and the Coen brothers, before reaching his career-defining role as Kylo Ren in the sequel “Star Wars” trilogy. Despite saving those “Star Wars” movies and fantastic roles in “BlacKkKlansman,” “Silence,” and “Marriage Story,” “Annette” is his best role. It’s also important to note that Driver sings unexpectedly well. Sure, we have had samples of his singing such as when he utilized his deep bass tone in “Inside Llewyn Davis,” in which he played a backing country singer, but he sings surprisingly well in “Annette.” He doesn’t quite have a lot of power in his voice, in fact, it’s borderline thin at times, but Carax doesn’t put him in positions to fail in the songs he sings. It shouldn’t come as a surprise that Driver is the best part of the film. After all, this is the Adam Driver’s movie, but he still steals the show with a flamboyant and committed performance. He is able

to play the role of the fading star awfully well, equally balancing moments of rage with moments where he seems broken. There is a scene almost halfway through where his character has a breakdown on-stage. From there on, his character continues to go down a dark path and only Driver could keep your eyes glued to the screen.

In a world where Ben Affleck and his relationships have been the center of attention since the beginning of the pandemic, it feels appropriate that “Annette” also plays around with the idea of celebrity-driven news/gossip. Henry and Ann are celebrities themselves in the film, and there are intermittent interruptions from the “Showbizz News” channel, which constantly provides updates into the personal lives of the two. It is a brilliant representation of the drama YouTube culture and gossip blogs, which always find a way to discover when a celebrity is taking a trip on their yacht or having a child. Henry is a stand-up comedian as provocative as Ricky Gervais, and the only real difference in their acts is that Henry is much more physically active in his sets. Both find themselves saying things that audience members may be offended by, but like Gervais, that is part of his appeal to audiences. “Annette” features commentary on “cancel culture” that also feels very relevant considering the times we live in. Henry is a stand-up comedian after all, and it is so hard to tell edgier jokes in an age where sensitivity is at an all-time high, and social media only heightens this. At one point, Henry is practically booed off of the stage for jokes that went too far, and Henry feels as though the audience has turned on him.

When you go to the theatre, there is always a suspension of disbelief to some extent when watching the play unfold. Did you ever notice how actors will trot in circles as the backdrops change and this will represent a long journey? Speaking of the backdrops, backdrops from a Broadway play are usually painted and not necessarily photo-realistic. None of this usually matters to audience members, and the same type of suspension of disbelief exists in “Annette,” which happens to be a different medium. There are a lot of moments that resemble a stage play despite taking place in our real world. This is something “In The Heights” also found a way to display earlier this summer in moments where it felt like actors were belting out their songs towards the camera like they would the audience when in a theatre setting. There are times where backdrops of “Annette” do feel fantastical, but never to the point that it will take you out of it. The scene on a yacht is worth the price of admission alone, and this scene balances the aesthetic of a stage play and reality. When Henry and Ann walk out onto the deck of the ship, water is pouring down amidst a stormy night. Wider shots show that the ship seems to be on a soundstage, and there is water splashing around akin to the boat scene in “Indiana Jones and the Last Crusade.” In this moment the film feels like a stage play, but still has a level of realism that cannot be captured on a stage.

“Annette” is a visually stunning musical that fits the bill of a grand Broadway show, even going so far as to have a little song at the end of the credits with the cast singing their farewells. It is a nice touch, and the closest thing to a curtain call a film will have. The zany direction of Leos Carax is admittedly strange and could be off-putting at times, but Adam Driver steers the ship with a very committed performance that is equally as strange. The music, while very well-done, can often be overwhelmingly reused and exhausted. Though the opening number is by far the best and most epic song in the entire film. It gets the film off on the right foot, and is a good hook into the strange world of “Annette.” Be that as it may, “Annette” is one of the most unique films to have come out in years, and while it likely won’t resonate with all viewers, it will be applauded within the niche pocket of moviegoers that it does hit. At the very least, those who want to see Adam Driver shirtless for half of a film will be satisfied.