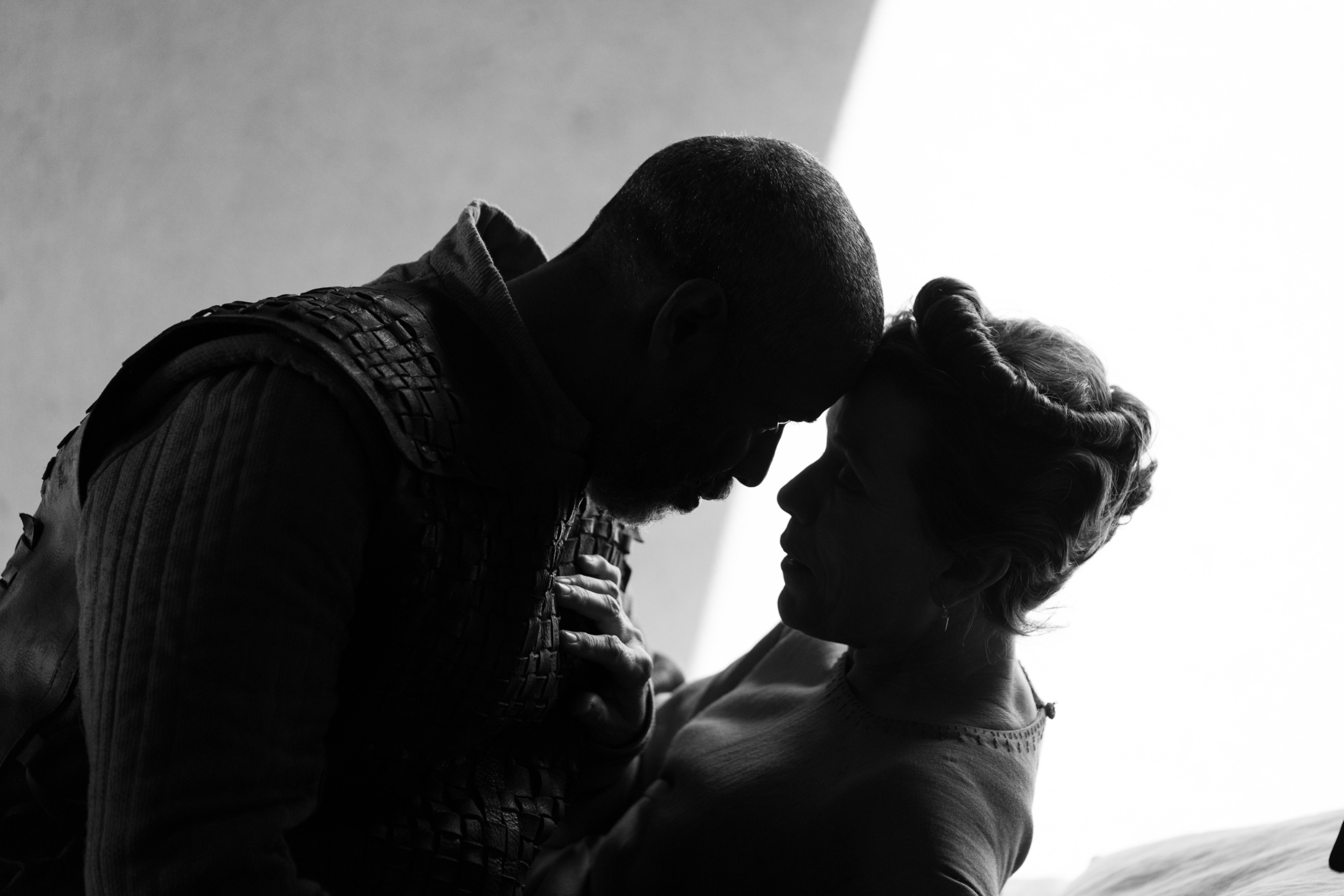 Review: ‘THE TRAGEDY OF MACBETH’ Is The Best Rendition of an Oft-Covered Song

Shakespeare’s “Macbeth” feels like a classic that has been adapted to death where many serve as a good cover of the great source material. Hell, even the basic template of the rise and fall to the very top of success is used in countless movies; just look at “House of Gucci.” But Shakespeare’s “Macbeth” is the ultimate version, but Joel Coen’s “The Tragedy of Macbeth” may be the most faithful to the source material while simultaneously being the most creatively ambitious. A bold aesthetic, that combines imagination with a cold-blooded black-and-white palette, is one of the most expertly-crafted films of the year.

Denzel Washington in “The Tragedy of Macbeth.” Photo by Alison Cohen Rosa and courtesy of A24.

Coen had made the decision to keep the Shakespearean dialogue in the film, and all of the performances fully commit to this. Denzel Washington and Frances McDormand may be at the forefront for the most part, but there isn’t a performance that lacks in comparison to others. And while it does take a few minutes to adjust to Denzel’s very iconic voice speaking in Shakespearean dialect, he ultimately steals the show with a powerful rendition of the “To-morrow” soliloquy. It’s a ferocious performance that leaves a much better taste in your mouth (and it’s not even close) than “The Little Things.”

Frances McDormand, fresh off of another Oscar win, also shines as Lady Macbeth with her shining moment of course being the sleepwalking scene. But even earlier in the film, as Lady Macbeth convinces her husband to do what he has to do in order to climb the ladder, it’s McDormand’s stellar and fully-committed performance that drives it home. Clear desperation and ambition to get what she wants. Coming out of the film, everyone will be talking about Kathryn Hunter as the witches, and deservedly so. Hunter gives such a creepy performance with some chill-inducing voice-over at the beginning of the film.

While more simplistic than a Wes Anderson set, Coen’s sets for “The Tragedy of Macbeth” are mesmerizing. There is a simplistic nature to all of it, but it’s the castles that stand out with their tall walls with little decor and pillars that look as tall as the beanstalk from “Jack and the Beanstalk.” It’s sort of like the inside of Kanye and Kim Kardashian’s house, but on an even grander scale (see photo below for an example). It’s quite haunting to look at; playing the dual role of prison and palace, but you cannot help but imagine yourself wandering the empty halls. The cinematography of the outdoor shots is shot beautifully in black-and-white. Some shots harken back to “The Seventh Seal” with their rich black composition. Somehow, “The Tragedy of Macbeth” is vibrant despite a black and white canvas. Even backdrops of the sky find a way to blend reality and fiction as the skies occasionally look like a painting. The nighttime sky was the most memorable with its twinkling stars. For as nightmarish as the settings of the film can be, the backdrops bring a dream-like quality to the film to counteract that.

(L-R): Joel Coen and Frances McDormand. Photo by Alison Cohen Rosa and courtesy of A24.

Coen’s gothic rendition of the classic tragedy is like The Beatles’ version of “Kansas City/Hey-Hey-Hey-Hey!.” It’s a vast improvement over the original (sorry, Little Richard). It beautifully puts the words of Shakespeare’s original text to the screen like faces to a name in haunting, yet beautiful fashion. There are few films these days as well-crafted as “The Tragedy of Macbeth,” and with its stellar cast and mesmerizing cinematography, it very well could put Coen back in the hunt for another Oscar.

“The Tragedy of Macbeth” will open in limited theaters on December 25 and be available to stream on Apple TV+ on January 14.

‘BELFAST’ Review: Should I Stay or Should I Go?

‘FRANCE’ Review: Léa Seydoux Stars As A Journalist With The Worst Luck