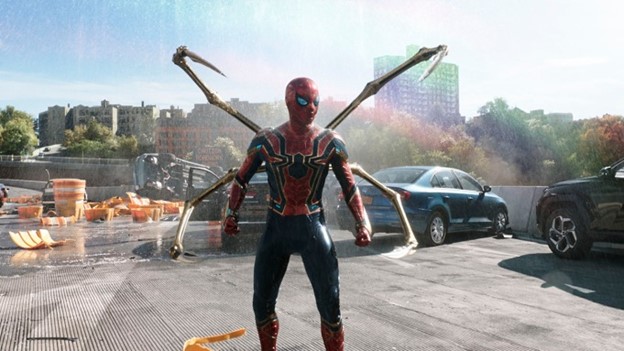 Given the 37.1 million it earned on Monday, Spider-Man: No Way Home should be between 325-350 million domestically today. The current worldwide box-office total stands a little under 700 million, so it should be gliding over F9 and Detective Chinatown 3 by Friday. It will continue to sail along to pass 1 billion dollars at some point over the holidays, but how far it can ascend remains the question. Unfortunately, the film will have to continue grossing without China (due to tense diplomatic affairs), which means it will not gain enough traction to combat the likes of Avengers: Infinity War, let alone challenge for a 2 billion dollar worldwide gross.

But, enough nitpicking. No Way Home is about to become challenged by a slew of films for the Christmas holidays (which includes The Matrix Resurrections, Sing 2, The King’s Man, Licorice Pizza, The Tender Bar, American Underdog, and A Journal for Jordan). It’s not unusual to release several features during the holidays as families will have more times on their hands for movie going. However, pandemic issues have made it difficult for many to sell tickets.

No Way Home will hold off Matrix 4 and Sing 2, with a 90-100 million sophomore weekend (62-66% drop). The question is who will take second place over the Christmas five-day weekend frame. The fourth installment of the Matrix is releasing simultaneously in theaters and on HBO Max, while the sequel to 2016’s Sing is staying exclusively in theaters.

It’s been almost twenty years since the Wachowskis’ sci-fi series left an impact at the theaters. This time, Keanu Reeves and Carrie-Anne Moss return at the helm with some new supporting characters. Nostalgia is the big selling factor of this feature, plus the mixed-to-positive reception gained. Sing 2 will cater to kids and families, although the musical genre has stumbled painfully this year. Meanwhile, The King’s Man serves as a prequel to the original back in 2014. Licorice Pizza, one of the best films of the year, rolls into theaters on Christmas Day.

Again, it appears as conventional Christmas roster, offering a little of something for everyone to see (aside from the usual eye-grabbing comic book adaptations). COVID cases are surging again, so that might impact the totals this coming weekend a little more than expected. Hey, at least it’s not as atrocious compared to last year’s, when Wonder Woman 1984 earned under 20 million in its opening weekend (88% less than its 2017 predecessor) and second-place News of the World nabbed 2.4 million.

Spider-Man and Co. will brighten the holidays.

Hollywood History: Meghan Markel isn’t the First Hollywood Actress to Give up Her Career for Love