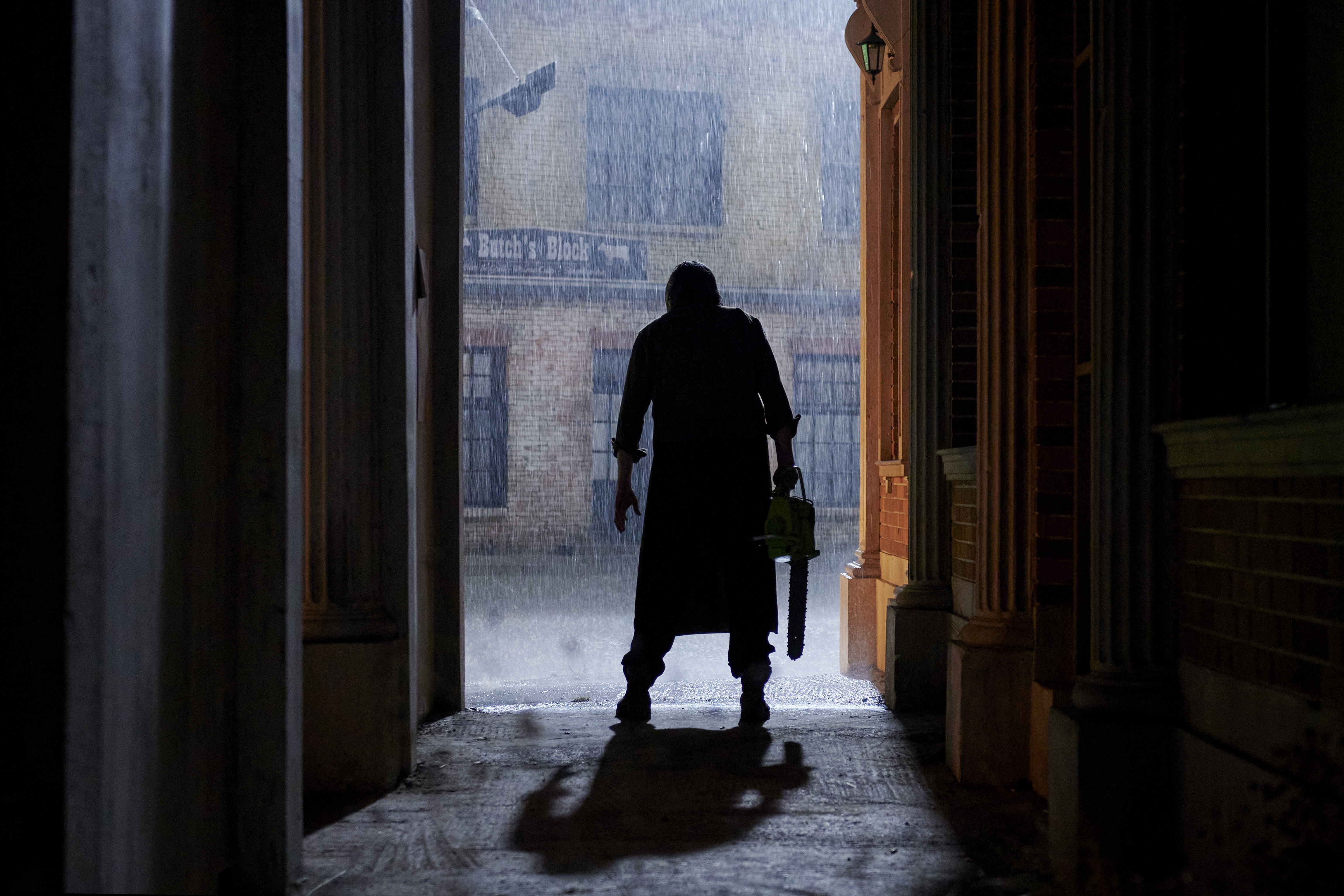 Movie Reviews on February 18, 2022 0Likes At The Movies
ShareTwitterFacebookInstagram

What screams a need for validation more than a legacy sequel that no one wanted? Making a legacy sequel that no one wanted. “Texas Chainsaw Massacre” is a failed attempt at rebooting a franchise for a new generation, following the “Halloween” (2018) template that so many films have followed including “Terminator: Dark Fate” and “Candyman” (2021). For those that don’t know, a legacy sequel a la “Halloween” (2018) is a sequel that erases any mention of other (mostly poorly received) sequels. The original “Texas Chainsaw Massacre” is a classic and one of the most iconic horror films of all time. The 2022 sequel has very few bright spots that you would want to build around in future potential sequels and follows a ridiculously stupid plot. That’s not to say that the original was a nuanced story, but “The Texas Chainsaw Massacre” (2022) is like every horror trope rolled into one 82-minute movie including some of the most idiotic characters of all time.

“Texas Chainsaw Massacre” (2022) follows a group of friends that are “entrepreneurs” (this is being very generous) and want to renovate a small Texas town. The group brings Leatherface back out to play while the survivor of the original film, Sally (Olwen Fouéré), attempts to conquer her demons and avenge her friends from the events of the original film.

This new installment attempts to update the story to today’s society. The group of entrepreneurs is an attempt of making fun of TikTok influencers, though I don’t know how Dante (Jacob Latimore) or Melody (Sarah Yarkin) can classify as influencers when their posts get 2,000 likes, but who am I to judge. These are your stereotypical Addison Rae, Hype House-type morons that believe they’re making a difference in the world. When asked if the group of entrepreneurs are a “cult,” one of the members replies: “We’re idealistic people who want to change the world.” When Leatherface confronts a group of people on a bus, they all take out their cell phones. I get that this was supposed to be an “aha” moment that may get a chuckle, but one of the people on board yells “Try anything and you’re canceled, bro” to Leatherface.

The car driven by Melody and Lila (Elsie Fisher), one of the only standouts I might add, is a riff on Teslas complete with a gigantic iPad in the middle of the dash and self-driving features, though the auto-pilot goes about as fast as Micahel Myers runs. There is also a half-hearted attempt at touching on Deep South politics with the one Black character in the entire movie (at least he doesn’t die first!), but it felt like it was out of obligation more than anything.

The original “Texas Chainsaw Massacre” was gruesome in nature, but it wasn’t gratuitous. “Texas Chainsaw Massacre” features no real thrills, just basic setups (more on this) with someone being gutted, thrown through a window, or having their own bone used to stab them in the neck. The aforementioned setups are where stupidity reaches a new level. For example, when one character who the group just met dies, Dante’s girlfriend (played by Jessica Allain) volunteers herself to go to the hospital with her. Of course, common courtesy is a thing, and perhaps Dante’s girlfriend just had a conscience, but she wasn’t even a part of the situation and it was just a more convenient way to separate her from the rest of the group.

Just as ridiculous was when all of the potential investors are having a party on the bus and Leatherface intervenes. First off, how are they having a party without the power? Keep in mind, they do not have the keys at this point. And when Leatherface has mowed through everyone on the bus, except for Melody and Lisa who are hiding in the bathroom, he attempts to break down the locked bathroom door. He does so successfully, not until both Melody and Lisa use the conveniently-located roof exit (who puts one in a bathroom?). Once they retreat, Leatherface just goes back to his bedroom. Why in the world did he not just continue chasing the girls that he is so hellbent on killing?

Jamie Lee Curtis returning as Laurie Strode and Linda Hamilton returning as Sarah Connor were worthy legacy characters to bring back because both Jamie Lee Curtis and Linda Hamilton played more mature versions of the characters. It’s like Stallone in the “Creed” movies, he is still the character you once know but older and wiser. Aside from the iconic last scene, I don’t even remember Sally (this could just be a testament to my memory). It’s cool that the original actress came back to reprise her role, but it felt like an attempt to do what “Halloween” (2018) did with Jamie Lee Curtis. Sally looks at a polaroid taken in the van that transported her and her friends on more than one occasion, and she tries her damnedest to save Melody and Lisa, but, while I can’t speak for diehard fans of the franchise, this wasn’t a chill-inducing and long-awaiting return that felt like anything special. She stares at her polaroid, throws on a cowboy hat, and takes a solo charge right at Leatherface in a “heroic” moment.

Legacy sequels can be a great thing. I don’t like “Halloween” (2018), but it clearly did an effective job at revamping a lost franchise. “Friday the 13th” could use similar treatment, but “Texas Chainsaw Massacre” just had an installment in 2017 (“Leatherface”), so perhaps it was too soon to reboot it. It felt way closer to “Spiral” than “Halloween” (2018), and that is not the company you want to be joined with. I apologize to the filmmakers and actors involved in this film, your work is applauded, but it just didn’t work.

“Texas Chainsaw Massacre” will be available to stream on Netflix on February 18.

F9 Review: Is The Finish Line In Sight?