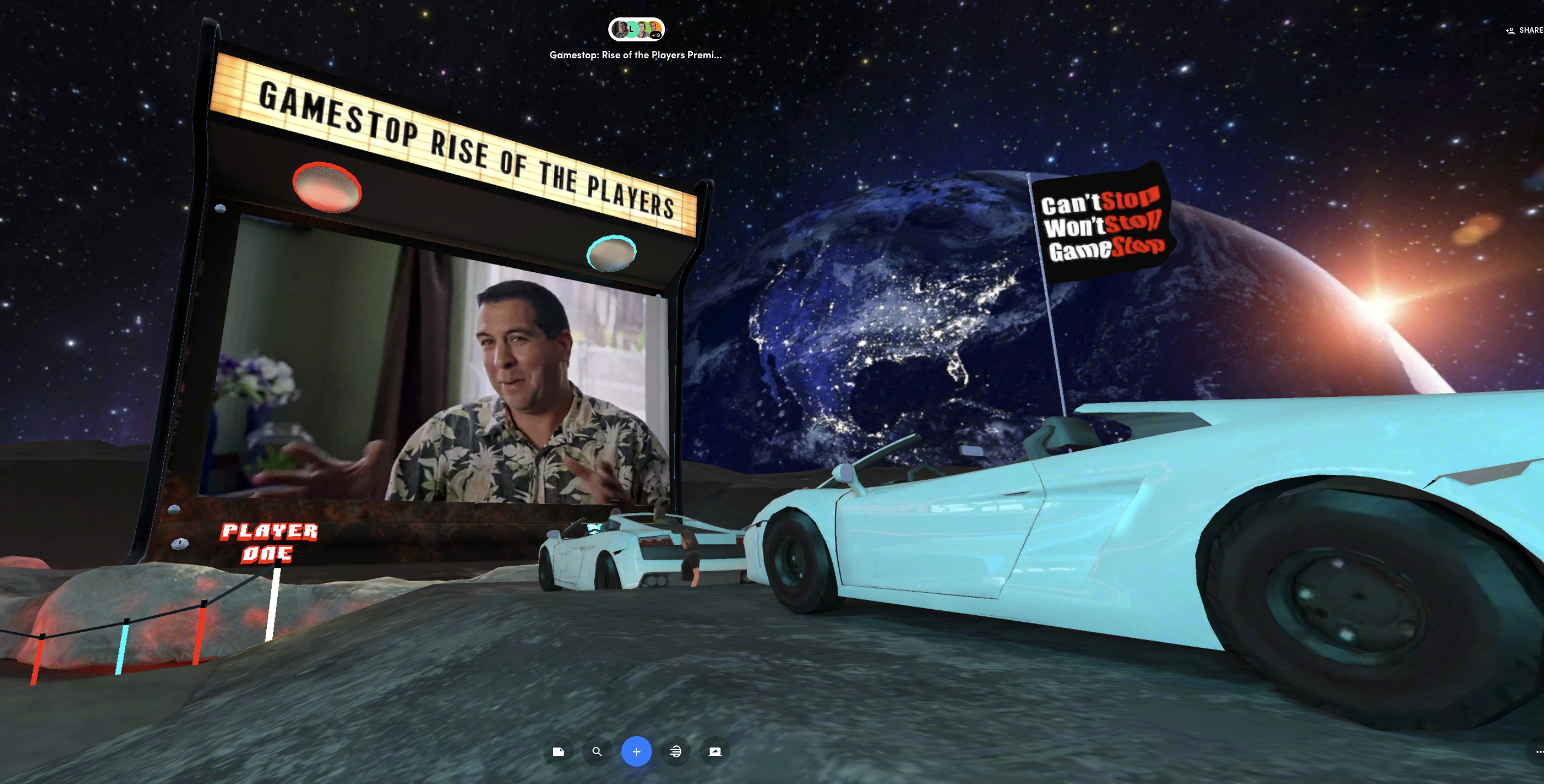 SUPER and DECRYPT STUDIOS TAKE GAMESTOP: RISE OF THE PLAYERS DOCUMENTARY TO THE MOON FOR A METAVERSE SCREENING

Uncategorized on March 2, 2022 0Likes At The Movies
ShareTwitterFacebookInstagram

Super and Decrypt Studios have partnered to produce a live metaverse premiere of SUPER ’S newest documentary GAMESTOP: RISE OF THE PLAYERS. In a tongue-in-cheek riff on the popular meme, the Tuesday, March 1st screening took viewers “to the moon” to watch the film at a drive-in theater on a rocky landscape orbiting planet Earth. Director Jonah Tulis took part in a live Q&A session following the screening to the gathered crowd of film, gaming, metaverse, and crypto enthusiasts.

RISE OF THE PLAYERS, the Super produced and distributed movie about the GameStop stock market phenomenon of January 2021, was released in over 200 theaters on January 28, 2022, the one-year anniversary of the stock’s peak. The metaverse premiere was held in celebration of the film’s release to digital platforms for rent or purchase. The exclusive GAMESTOP: RISE OF THE PLAYERS public exhibit in the metaverse will be available for fans to join for free from March 2-9 on the SpatialXR Apple/Android app, Spatial.io on Web, or VR Headset.

The metaverse experience was designed by Polycount.io and shepherded by Decrypt Studios, the Web3 production house that partners with brands and creators to curate NFT and metaverse activations, was held in the Spatial metaverse and accessed via VR headsets, desktop, and mobile browsers. Attendees received a POAP (Proof of Attendance Protocol), a type of Ethereum-based NFT that serves as both a ticket to gain entry to the screening and a collectible keepsake from the event.

“Of all the movies for there to be a metaverse screening of, this one is probably the most fitting,” said Jonah Tulis, who directed GAMESTOP: RISE OF THE PLAYERS. “The community of GameStop investors, crypto enthusiasts, and NFTs are all interconnected. People learning to trade at home ended up creating a movement that started a financial revolution; similarly, so many people are now interacting online, which has helped to really accelerate the true launch of the metaverse. The events of January 2021 laid the groundwork for future change, and it’s these everyday ‘players’ that have started the revolution in this new reality.”

Why a metaverse screening? As trading platforms such as Robinhood have democratized access to trading, so too has the metaverse and Web3 decentralized access to the virtual world. The premiere of GAMESTOP: RISE OF THE PLAYERS via a moon simulation in the metaverse was seen as the ideal setting for viewers and filmmakers to experience an entirely new way of interacting across borders and time zones.