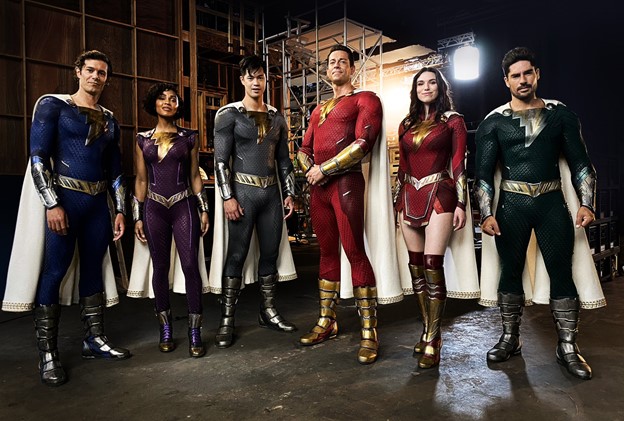 IS ‘SHAZAM 2’ GOING TO FACE STIFF COMPETITION AGAINST ‘AVATAR 2’ AND UNIVERSAL’S ‘MARIO’?

Last month, we received word from Warner Brothers that their entire slate of superhero features planned for 2022 would be pushed back due to COVID-specific post-production delays. So, each movie planned shifted back a couple of months (i.e., Black Adam left the summer slate for Halloween, and DC League of Super-Pets went from an early summer start to a later summer outing).

But guess what showdown got scrapped? Aquaman: The Lost Kingdom opens the same day as James Cameron’s long-awaited Avatar 2, a week before Christmas. James Wan’s story about a mixed-race hero in underwater fantasy land who becomes the unbridled king of his people will no longer combat Cameron’s aquatic sequel about a stranger in some CGI-fantasy land who becomes the de-facto ruler of people he barely understands.

Christ Almighty, this could’ve been the ultimate test, brothers! It could’ve been the reincarnation of Zack Snyder’s diehard fans justifying the horrendous Batman v. Superman: Dawn of Justice vs. Captain America Civil War (Nah, more like Avengers 2.5) blockbuster back in the late spring/early summer 2016 season!

Anyway, now we’re getting the (underdog) Shazam: Fury of the Gods pitted against the mighty Avatar 2. The good news is that Shazam 2 doesn’t need a lot overseas to be a huge hit. Avatar in 2009 acquired $205 million in China, and then an additional $55 million upon re-release last year.

The bad news is that we’re pitting a small sequel against the long-awaited Avatar follow-up. Recall how Avatar changed the special effects/3D landscape upon its debut over a decade ago and became praised for its sensational experience (similar to Star Wars), action, and underlying political themes. It earned $2.789 billion worldwide, the highest-grossing feature at the time (until Avengers: Endgame dethroned it ten years later). Once it got re-released in China in 2021, it took back its throne with a $2.847 total gross.

Since Disney purchased 20th Century Fox, Disney owns the top five highest-grossing features (Avatar, Avengers 4, Titanic, Star Wars 7, and Avengers 3). In theory, that allows them to broadcast any of these franchises to unwavering success for the next few decades. Warner Brothers come nowhere close to this feat, and Shazam 2 may crumble when combatting Avatar 2 on December 16th.

The other thing to consider is Universal plans to drop an untitled Mario feature the following week, collaborating with Nintendo and Illumination. It will star Chris Pratt, Anya Taylor-Joy, Charlie Day, Jack Black, Keegan-Michael Key, and Seth Rogen. This (family) feature will undoubtedly pull strings at David F. Sandberg’s movie and can easily lure kids and fans of multigenerational nostalgia away.

The first Shazam! netted only $366 million, and it stood out spectacularly with a fun, vibrant tone amidst the dark, grim DC Extended Universe. Once Endgame came around three weeks later, it almost became a lost relic in the grand scheme of multiplexes. Since its sequel challenges Avatar 2 directly, it won’t open as high domestically and will need good legs for the remainder of the winter holiday season (which is still entirely plausible). But if Mario tramples its hopes, it will require a miraculous exchange in foreign markets or when it lands on PVOD.

Any way we look at it, Zachary Levi and his friends will play the underdog position come the holiday season against the return to the world of Pandora and the Mario Brothers’ journey in the Mushroom Kingdom. And to think of it, many of us were once wondering how James Wan’s Aquaman 2 could challenge the Avatar brand (even if superhero films are the moneymakers today).

With Three More ‘Avatar’ Sequels On The Way, Is James Cameron Competing Against The Behemoth of Marvel Studios?