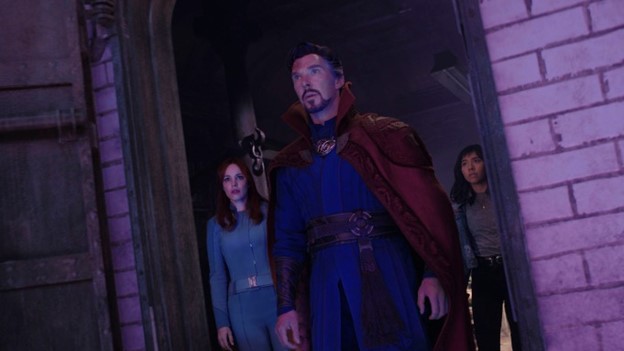 ‘DOCTOR STRANGE IN THE MULTIVERSE OF MADNESS’ REVIEW

Back in December, as Spider-Man: No Way Home unraveled to give audiences insight into the grand scheme of the multiverse, it felt as if the possibilities were endlessly unimaginable. Tobey Maguire and Andrew Garfield stole the show (and our hearts) in the third act. While the story was highly frustrating at times leading to those giddy moments, we learned to knock it all aside to relish in the “three Spider-Men banding together against some of their most iconic villains.”

Now, Benedict Cumberbatch, the individual who has had supporting/main roles since his debut in his solo story back in 2016 in the Marvel Cinematic Universe timeline, gets a sequel that explodes with blinking red lights as his titular onscreen character plunges into the multiverse to imaginative and fun (albeit convoluted) results.

The plot follows a young girl named America Chavez (Xochitl Gomez), who contains powers that allow her to freely maneuver between the multiverse as she stumbles into the MCU world and Doctor Strange (Cumberbatch), where she explains that she is being hunted down by nefarious monsters. Strange and his partner Wong (Benedict Wong) decide to enlist the assistance of Wanda Maximoff (Elizabeth Olsen). However, due to the events of WandaVision, Wanda wants Chavez’s powers, leading Strange and associates to venture across the multiverse to protect her while trying to attain a plot MacGuffin (the Book of Vishanti) to stop Wanda’s dark alter ego, “The Scarlet Witch.” Wanda is corrupted by another MacGuffin, the Darkhold, which allows the user to see their existence in another universe and take control of them to disastrous effects. And since we keep talking about MacGuffins, Chavez’s presence is also the third one.

With me so far? Maybe, but then there’s more. First, we get exposition dumps about a gap junction and incursion and how they contribute to the reality of the uncontrollable multiverse. Second, 99% of the time guarantees a monster or dark behemoth chasing one, so why not learn to run while possible?

As someone who has invested in this universe profoundly, there is a growing agony regarding how the MCU pivots its storytelling as of late. Remember when Black Panther had (arguably) the worst CGI but an engrossing story with a beautiful sense of awareness regarding racial politics and themes? That was over four years ago, and the MCU and Kevin Feige continue to trek risky waters to bring fascinating ideas and spectacle. Unfortunately, that comes at the cost of simple storytelling; the riveting insight one wants to comprehend behind examining a hero and their flaws. So you think people would stay devoted to Harry Potter or Indiana Jones if they couldn’t get the narrative to an adequate level?

As another movie about saving the world (or multiverse in this instance), Multiverse in Madness flounders at making the crucial moments engage. The storytelling here remains muted, only sticking in the back of the line for the eye-glazing visuals and CGI to take over every ten minutes. Kudos to director Sam Raimi for infusing some genuinely unsettling moments and his signature flair, but it only serves to cover up uneven pacing. If rumors are true that Raimi had to start filming before a script was in place, it proves true once thirty minutes have passed.

Cumberbatch and Gomez get their moments to shine, even if they’re not the breakout stars here. That position is reserved for Olsen, though, as the feature motivates her deluded, lonely life and allows her to encompass that antagonist role well. But there’s no further depth behind her intent on reuniting with her children in another universe. It’s all cut and dry, like a well-done steak that’s hard to chew and digest.

The cameos are fun, but some might’ve become spoiled already if one reads Twitter for a living or watched the What If? series on Disney+. Additionally, it may sound aspersing, but the roles only appear to satisfy fans’ dreams and showcase the future MCU features on deck (now that Disney owns all the former Fox superhero properties and still can work with Sony for Spider-Man content).

Doctor Strange’s second ride doesn’t get to take advantage of the multiverse since it plays each moment with assurance and caution. So rather than let Raimi go all in, he appears to step back due to corporate machinery (funnily enough, it’s the same reason he and all were disappointed in Spider-Man 3). And at the end of it, one realizes this blockbuster sews iconic moments from comic books and other movies together to a diluted effect.

Is Doctor Strange in the Multiverse of Madness watchable? Absolutely, as it endorses visual spectacle with some of Raimi’s noticeable horror techniques, some fantastic music from Danny Elfman, and a promising outlook for what plans Marvel has up its sleeve for the next decade. Sadly, debilitated storytelling makes it harder to come back to this entry in the multiverse (even if it felt slightly different).

“Are you happy?” the film asks several times. Overall, it’s about as self-indulgent and ridiculous as witnessing the second post-credits spitting in our faces (sorry, Bruce Campbell).