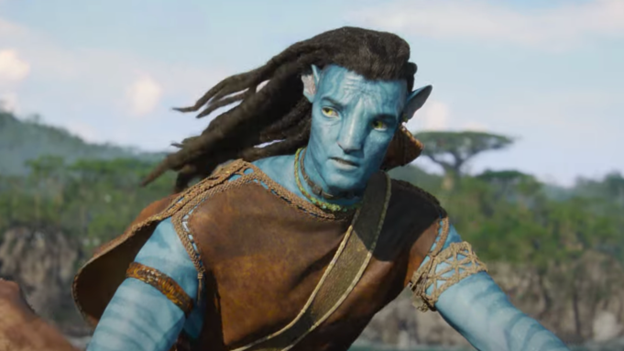 Yesterday, it seemed that yours genuinely stepped into the Thursday night preview of Doctor Strange in the Multiverse of Madness to become showered with trailers for the usual blockbusters: Top Gun: Maverick, Jurassic World Dominion, Lightyear, and Thor: Love and Thunder. The packed crowd seemed to get a few giggles out of Chris Hemsworth’s Thor coming into focus once Chris Pratt’s Star-Lord mentioned, “look into the eyes of the people you love.”

But then, it happened.

Out of the blue (pun intended), we witnessed a few new gorgeous highlights of the world of Pandora once more, and many folks were in awe that we were returning to James Cameron’s imagination once again 13 years later. The surprise factor is that a trailer of this magnitude did not release online but was attached to one of the most anticipated features of the year (that captured a $449 million global debut). To quote Christopher Nolan’s The Prestige, the look on their faces ensured that most folks had not forgotten Cameron’s $2.8 billion blockbuster from 2009.

We also got word that once the teaser finally dropped online on May 9th, it netted 148.6 million views in the first 24-hours. That’s higher than some of the recent Star Wars features but nowhere close to Spider-Man: No Way Home’s 355.5 million views, which took home $1.9 billion worldwide from its release in 2021. Keep in mind that The Way of Water teaser dropped in theaters first exclusively before dropping on Sunday night/Monday morning like the previous “only in theater” trailer debuts.

James Cameron’s first Avatar was an absorbing and enthralling fantasy about the world of Pandora, and Jake Sully (Sam Worthington) sets on a journey as an “avatar” with Neytiri (Zoe Saldana) to stop the RDA from killing off the Na’vi clan. It won awards, secured multiple re-releases for immersive experiences, and is the highest-grossing film ever. Once Avengers: Endgame took its crown back in 2019, Avatar was re-released in China in 2021 and took its place back.

Could the sequel replicate its predecessor’s success? Will it reach soaring heights, and have the thirteen-year wait have been worth it?

Filmmaking and movie theaters’ evolution has come a long way. The inclusion of streaming, PVOD, and all changed the landscape (for better or worse), and it now comes at a cost in how audiences will show up for movies. Yes, COVID may still linger in the public world, but some folks have adapted or not and remembered how the movie theater is a sacred place for viewing a movie properly.

The first Avatar amassed $760 domestic/2.847 billion worldwide. A 45-50% drop would put the sequel around $1.5 billion, which is not bad and could still be the highest-grossing feature of the year, assuming the three MCU juggernauts, Doctor Strange 2, Thor 4, or Black Panther 2 do not ascend past that mark before 2022 concludes. Secondly, we need to consider if China will love it or not (Endgame earned a ridiculous $629 million back in 2019 while Avatar 1 earned only $205 million in 2010).

Also, another element at play is how dead-set Disney is to put it onto Disney+ once it runs its course for 2-3 months in theaters. The first feature stuck in theaters for a whopping ten months! The competition will be much higher as Shazam 2 and Puss in Boots 2 release days after The Way of Water to wrap up the year. Then, suppose we’re going to be frankly strident. In that case, the first few months of 2023 contain Sony’s Kraven The Hunter, M. Night Shyamalan’s Knock at the Cabin, Marvel Studios’ Ant-Man and the Wasp: Quantumania, Warner Brothers’ Aquaman and the Lost Kingdom, Lionsgate’s John Wick 4, and Paramount’s Scream 6.

And lastly, we have three more sequels following The Way of Water. While it’s poised to be a massive hit, it must do well enough to warrant excitement for another three movies. It could quickly go south, as seen with the collapse of Fantastic Beasts, but many have faith in James Cameron as his first two Terminator features, Aliens and Titanic, all surpassed expectations and then some. So, expectations don’t have to stand astronomically high for the high-tech filmmaker. Still, we hope to be surprised by the remainder of the Avatar saga offers for the next several years.

We’ll see how all unravels once December 16th, 2022, hits. Another remastered version of Avatar will drop in September, so many can get a chance again to witness its brilliance.

And since we’re talking about another re-release, if it can capture $153 million, that’ll make it the first-ever $3-billion worldwide grosser in history. So I’m sure Disney can do as they please as they own all the top five highest-grossing films now.

Original to Reboot: How Do the Adaptations of Stephen King’s PET SEMETARY Compare?