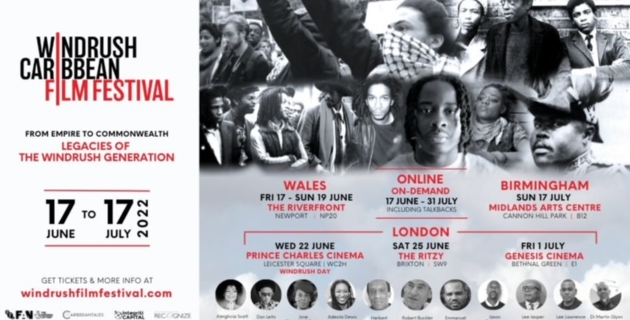 For the first time since its creation in 2020, Windrush Caribbean Film Festival will celebrate the pioneers of the Windrush generation in person in cinemas. Lovers of Black films are invited to join in-person screenings across the country from 17 June to 17 July, as well as discovering exclusive films online.

From Empire to Commonwealth: Legacies of the Windrush Generation is this year’s theme for the festival. This year, the festival will showcase the legacies not only of the original Windrush pioneers arriving in Britain during the 1940s but their descendants who are shaping Britain as we know it today.

Starting in Wales fans will be able to participate in various activities for the entire family over three days from 17 – 19 June 2022 at Riverfront. From there, the festival moves to London for screenings in three cinemas across the city, commencing on Windrush Day, 22 June at the Prince Charles cinema.

Birmingham will then play host for the closing night on 17 July, Midlands Arts Centre.

In addition to the films, panel discussions, and workshops, the festival will continue its tradition of an Awards ceremony. This will include the coveted Paulette Wilson Award as well the introduction of several new categories. All awards will be held as part of the closing ceremony in Birmingham on 17 July.

Patrons can also get an online Festival Pass, which provides on-demand access to the in-person screenings dates, until 31 July 2022. Viewers can watch recordings of the cinema screenings and talkbacks, as well as a range of additional films at their convenience.