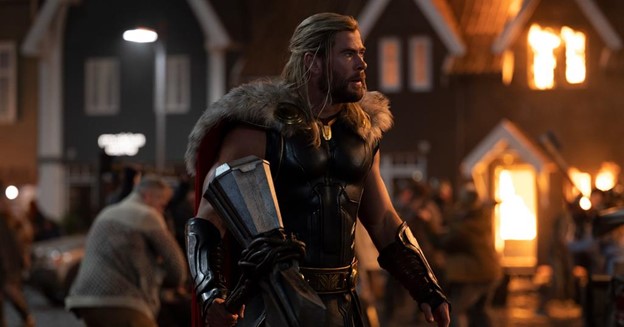 The biggest party of the summer is here. Thor: Love and Thunder is already racing past $400 million by the end of this sentence and will continue to stand at the top for its second weekend (until Jordan Peele’s Nope takes its stance the following weekend to make its mark). The 29th film entry of the Marvel Cinematic Universe has come with a smorgasbord of highlights and issues, and it’s exigent to recognize what might fall into Disney’s hands sooner than later (if they haven’t figured it out already).

Beware that spoilers lay ahead for this discussion, so prepare and behold!

Thor: Love and Thunder will not be crossing the $1 billion mark.

Yup, you heard it. So much like Doctor Strange in the Multiverse of Madness ($955 million), Thor 4 will do its best to fly up the ranks with middling reviews and the same revelation that it’ll head to Disney+ once 45 days have passed in the theatrical window. Yes, it didn’t collapse like Morbius, and it’s the only big-action superhero feature until Black Adam in October. Unless Nope or Bullet Train takes away its glory, the only family-friendly film to combat it is DC League of Super-Pets (the double-whammy irony if it undercuts the Disney sequel). Anyway, once Thor 4 finishes the weekend, it should be well over $500 million worldwide and continue with its best (possible) summer legs.

We would be having a much different conversation if A) the film had been better received and B) Disney would stop pulling this expedient tactic of funneling its grand attractions to its streaming platform in under two months. Why no one has followed Top Gun: Maverick’s moves are beyond words, especially as it is the highest-grossing film of the year (until Avatar: The Way of Water has a comment regarding that). Had the latest Taika Waititi-directed feature followed through, it could’ve potentially displaced Ragnarok’s $854 million total and possibly etched its name in the $1 billion earners’ club.

As mentioned a while back, it’s not necessary to reach $1 billion to qualify as a winner (ask F9, The Batman, and Jurassic World Dominion). But in Marvel’s case, it might be wounding their infrastructure from pre-COVID levels as a “guaranteed box-office hit” each time they release a new prized collectible. Plus, China and Russia are out of the equation, so Love and Thunder was already at a disadvantage compared to its predecessor.

The best case scenario is, hopefully, Thor 4 can reach $715-730 million worldwide. But, of course, that’ll be a relatively good target, and Disney knows they can still forge on with plans for the God of Thunder whenever Avengers 5 or Thor 5 takes place down their assembly line.

Much like Doctor Strange 2 and Jurassic World 3, Thor 4 contains little substance amidst an overbearing spectacle.

It is dispiriting to see how the modern blockbuster attempts to reach one’s expectations while trying not to push away the general audience. For example, if someone can tell this writer the story of any of these blockbusters as of late, you might get an ice cream sundae.

Doctor Strange 2 was about Wanda Maximoff trying to utilize a girl’s multiverse powers so she could reunite with her children, while Doctor Strange had to protect the girl and find a MacGuffin to stop Maximoff. Yeah, there are about four MacGuffins to keep track of in one film while CGI takes over every five minutes. Jurassic World 3 is more dinosaurs and techno-science babble while somehow reuniting the past and present cast in a rip-off of The Fast and Furious. Nothing was at risk, and it stayed like that the entire duration.

Thor 4 is a rom-com story, reuniting Chris Hemsworth and Natalie Portman after last sharing the screen in Thor: The Dark World. It also attaches a dark tale for Gorr and how he wishes to vanquish all gods due to the death of his daughter in the film’s introduction. Capped off at 119 minutes, all the elements of this adventure feel breezy but very tight. We don’t get much into Thor’s latest journey of discovering himself other than Waititi’s Korg character doing exposition throughout the runtime or awkward chemistry alongside his ex-girlfriend. This time, the God of Thunder characterization is somewhat cringe-inducing and too jolly compared to his last worthwhile performances in Ragnarok and Avengers: Infinity War/Endgame. Tessa Thompson’s Valkyrie is criminally underutilized, and Christian Bale’s fantastic portrayal as Gorr needed some more time to push him up the Marvel echelon as the best villain offered.

The story doesn’t contain much, except what the title says: love and thunder. And you get plenty, despite some jarring narrative structuring and tones when it came to light, bright Thor and Co. compared to the unsettling, dark Gorr and his shadow minions. The opening, epilogue, and third acts are the actual bright spots of this feature; otherwise, you can probably slide by this one as it contains nothing significant regarding the overall Marvel structure.

Much like Avengers: Age of Ultron, Thor: Love and Thunder is almost an obligation, a box to check off before folks want to move on to things they profoundly wish to do in the summertime.

There’s another trend to discuss? Yes, and it’s not a good one.

Remember how Marvel promised to feature more diversity regarding its cast and crew forging into the future? Black Panther featured a primarily African-American team. Eternals highlighted cultural representation and virtues across the board. Heck, even here, they give more progressiveness and inclusivity to LGBTQ communities (little bits go to Valkyrie and Korg around the sequel).

Well, we’re missing something as of late: the female heroes. Sure, many of us got a wondrous jolt of seeing a good majority of them band together in Endgame for a minute, but that feels like a distant memory more than ever. In Thor 4 (spoilers), Dr. Jane Foster is dealing with Stage 4 cancer and believes Thor’s former hammer and god powers will cure her; unfortunately, it’s not the case as each time she wields power, it drains her life force to fight cancer. Despite promising to give up the god power to be with Thor, she races to the final battle and fights valiantly but collapses and dies in Thor’s arms.

Once word got out that Gorr would be using a wish to slay all gods, he would realize the error in the end upon witnessing Thor/Dr. Jane Foster’s love. Reviving Foster wasn’t the case as a different and more refreshing card was taken instead. Instead, she got a proper arc, making Portman’s character one of the highlights of the fourquel. But, it still points to a festering wound in the Marvel canon in that they continue to kill off their female heroes.

Don’t you think that’s the case? Black Widow sacrificed herself in Endgame, so they got to resurrect everyone. Peggy Carter passed away in Civil War and hammered in Captain America’s beliefs that federal regulation of heroes was not the way to go. Gamora died from Thanos as he wanted to fulfill his mission of restoring balance in Infinity War. Maria Rambeau dies of cancer in WandaVision and an alternate universe in Multiverse of Madness. Wanda Maximoff sacrificed herself at the end of Doctor Strange 2. Oh, and Aunt May got battered and collapsed in Spider-Man’s arms in No Way Home.

That leaves the most senior surviving heroine (outside of being snapped away) as Evangeline Lilly’s Hope Pym/The Wasp. Brie Larson will be sticking around for The Marvels, so she’s safe (for now). And the Black Panther female leads are safe for the sequel because, sadly, Chadwick Boseman’s T’Challa won’t be appearing.

The dangerous trend is Marvel continues to bump off its female heroes at a startling rate. Maybe this isn’t intentional, but when you’re at over $27 billion as a franchise and only two (three if we’re being generous to Ant-Man and the Wasp) of those twenty-nine films had a sole leading female hero at the front, you’ve got a universe unapologetically becoming woman killers. And that’s laughably distressing compared to Legends of Tomorrow, She-Ra and the Princesses of Power, and even Gal Gadot’s Wonder Woman getting a third solo story on the way (as well as standing as THE true star in the much vilified Batman v. Superman and 2017 Justice League movies).

Thor 5 needs a strong narrative aside from more fun and giggles.

Taika Waititi recently mentioned he’ll only do the fifth installment if Chris Hemsworth returns. And while that’ll practically be the case, there needs to be an incentive behind viewing it other than more comedic value and visual effects overload.

The character of Thor needs a fresh reboot in terms of storytelling. He has lost everything from his parents, friends, home, brother (multiple times) and now, his genuine love partner. The Avengers have disbanded, his stint with the Guardians of the Galaxy was terribly short-lived, and it doesn’t appear that the “Revengers” will be back together again.

Fortunately, the character (no spoilers) inherited something of unique value in the epilogue of Love and Thunder. It’ll hopefully give more drive and ambition to his arc in the following slate of films. The post-credits also gave a tease of his next foe, so that is something. And maybe he’ll meet up with Loki someday (after his variant dropped into the TVA in the titular Disney+ series).

But, Waititi needs to bring back that revitalizing aspect of Ragnarok. Instead of cramming two major comic book arcs into one feature (as done here), perhaps breaking down further barriers and exploding Thor’s world again will manifest into something alluring and convivial. The key is keeping it fresh, not producing a semi-redux. At this moment, we are laying down the conjecture that Thor 5 releases probably in 2025, but we’ll get a more definitive answer once Kevin Feige finally dishes out what the end goal is for Phase Four and the next era of the MCU. As it stands, we’re tossing out old and new ideas, but no Thanos-like inevitable meeting in mind for our heroes (yet).

Perhaps Chris Hemsworth should take a step back from the role, and when he returns, the MCU could have a mighty clear direction as it tries to set up dates with Kang the Conqueror, the Fantastic Four, X-Men, and possibly Galactus down the line. Or combine it all into the “Secret Wars” and bring back the Russo Brothers to direct. Your move, Marvel.

CELEBRATING A 21-YEAR ANNIVERSARY OF THE MATRIX AND ITS LEGACY