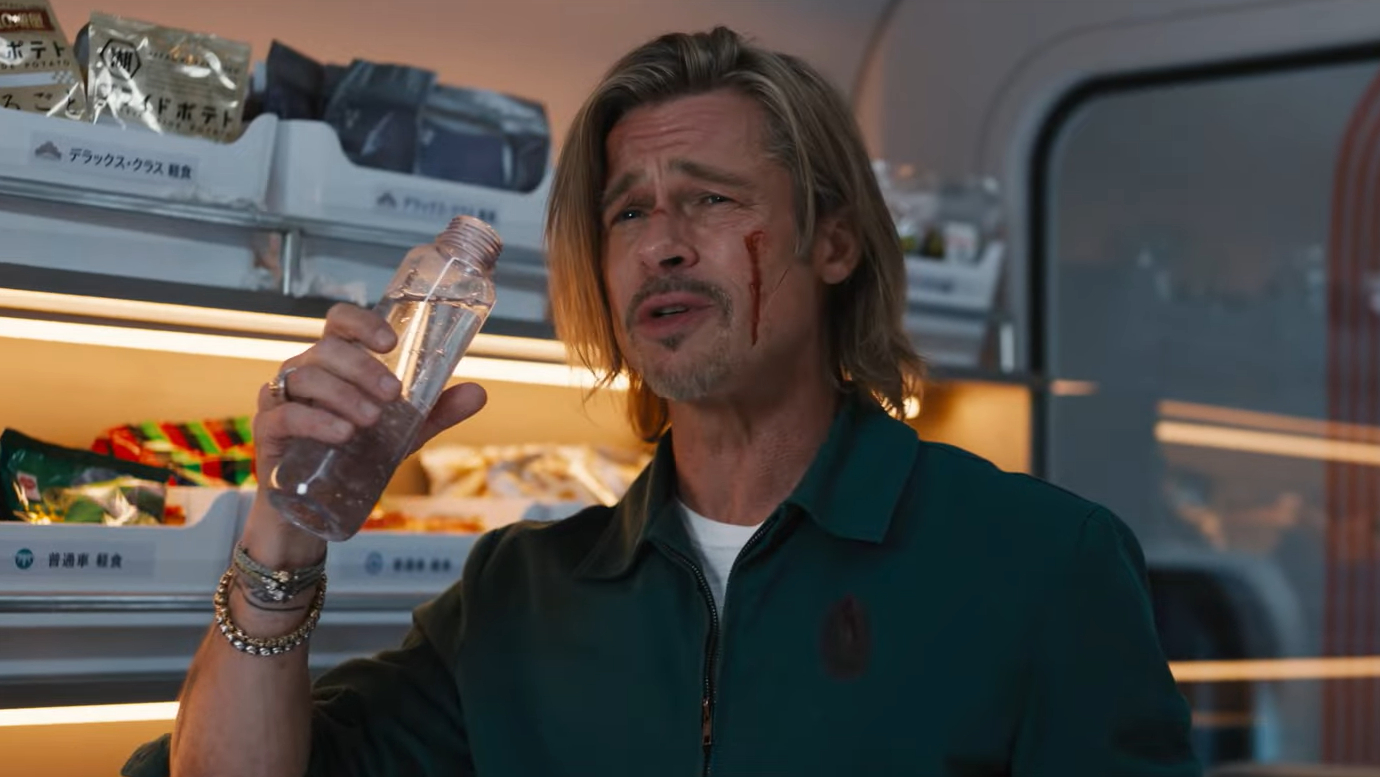 When flying down the track, you need to put on the brakes sometimes to reassess your direction; in Bullet Train, its high speeds run into circles continuously to pay a cheap, shrill homage to filmmakers like Quentin Tarantino and Edgar Wright.

I’m not sure what type of vanity director David Leitch had up his arm sleeve this time, but it comes as a frank disappointment when considering his film selection thus far: Atomic Blonde, Deadpool 2, Hobbs and Shaw, and co-directing John Wick. The latest feature, based on the Maria Beetle novel by Kotaro Isaka, feels overbearingly smug and too ham-fisted with flashbacks and exposition. The action is fun and all, but it still feels like an element that is attempting to disguise a lame duck narrative.

The plot contains about seven subplots to follow, which is equally as preposterous as it is mirthful. Brad Pitt’s “Ladybug” has an objective to get on a bullet train traveling to Kyoto, grab a suitcase full of millions of dollars, and then exit as soon as possible. The problem is there are three other killers onboard, including hitmen brothers “Lemon” (Brian Tyree Henry) and “Tangerine” (Aaron-Taylor Johnson), and deceptively innocent young schoolgirl “The Prince” (Joey King). The two brothers work for a shadowy crime figure called “The White Death” (Michael Shannon) and must deliver his son and the MacGuffin briefcase. They constantly bicker at one another with arguments, particularly one about the old-fashioned Thomas the Tank Engine series. Meanwhile, “The Prince” exploits Andrew Koji’s “The Father” to take the briefcase after she puts his son in the hospital. Oh, and a gentleman called “The Elder” (Hiroyuki Sanada) urges his son “The Father” to redress the recent atrocity for the family.

And then there’s Zazie Beetz’s “The Hornet” and Benito A. Martinez Ocasio’s “The Wolf,” with their subplots revolving around poison/revenge. Plus, a bunch of A-star cameos in this two-hour feature would’ve been better off serving as the conductors/staff of the train.

Again, there are parts of this feature that contain a nary sense of fun. But each time the train stops, it comes off as an exercise in orientalism and the retreading of razor-cut backstories that don’t allow enough for the audience to sink their teeth in. Brad Pitt still acts like a buffoon, as he subtly has for most of his career (trust me, that accent in Inglourious Basterds would have you rolling on the floor). He becomes perplexed with Japanese culture and language (including profanity) that the cinema is a tourism brochure of Japan’s livelihood. Hiroyuki Sanada surprisingly doesn’t end up in a coffin, and he’s a silk thread alongside Pitt in this tattered movie. And heavily English accented, Johnson and Henry, give their spins on comedy.

The theme of fate also gets some victory here, especially when Pitt’s character continually believes he’s the most unlucky guy in the world. In contrast, Sanada’s character stands destined to try to pay off his redemptive arc. The mix of seriousness and comedy doesn’t jell together, but this is a flying-paced action work, so one’s mileage may vary.

But again, it’s a motion picture tainted with montages and excessive backstories that becomes clunky. And then, upon trying to tie the knot in the third act, it converts into a cutesy explanation as to why everyone was on the train or why certain events occurred for such matters. The spurting arteries amidst the frenetic action and camerawork are nice nods to Tarantino or even (once) accomplice Ricardo Rodriguez, but they feel stilted and slightly derivative.

If you want an action feature that comes with tons of comedy, you’ve seen better ones out there. Bullet Train will fly towards the back of the action line once it puts on the emergency brakes.

Review: ‘AMERICAN UNDERDOG’ Is Not The Greatest Film On Turf