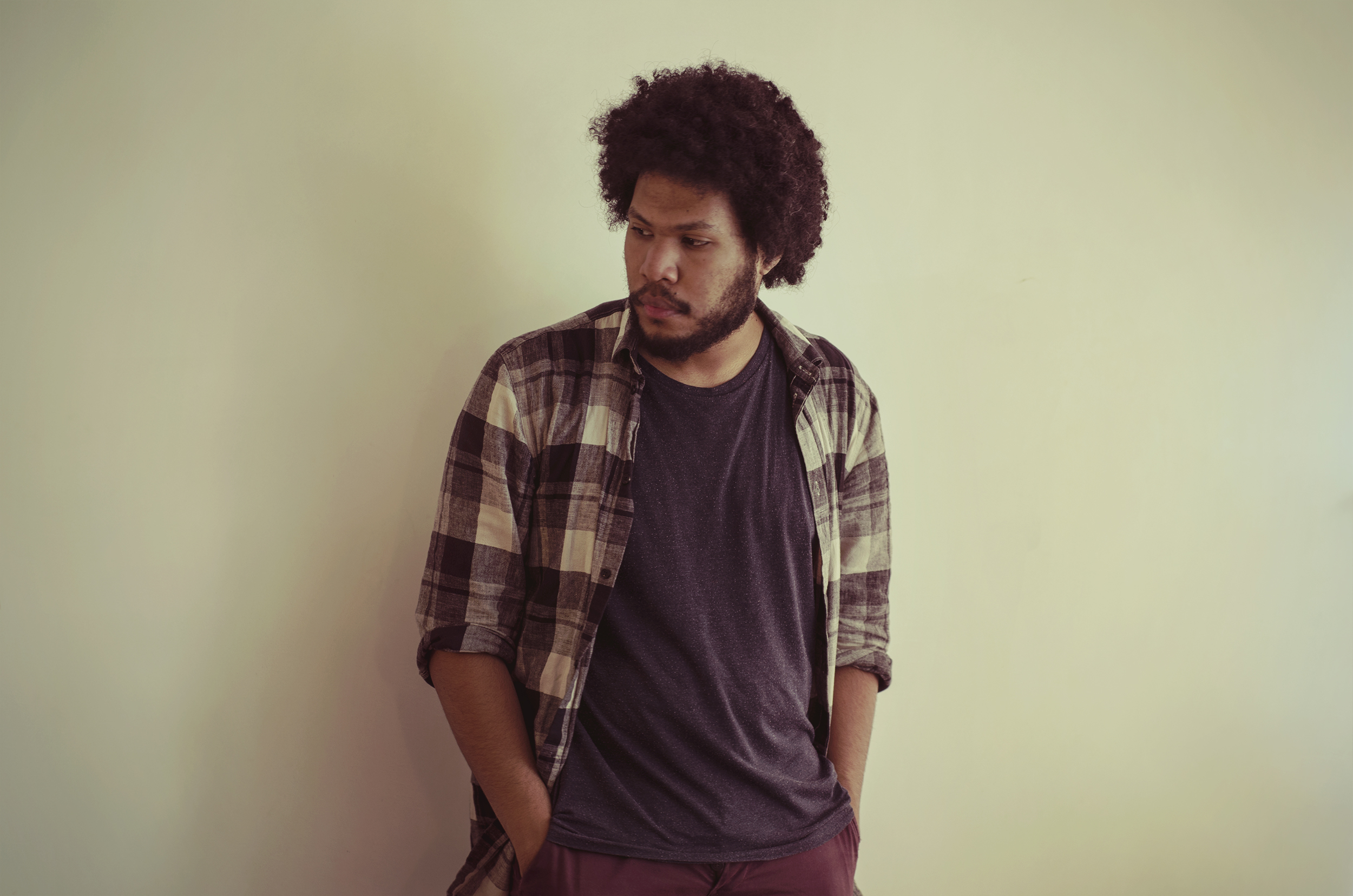 Mr. Koeyers, it was a great pleasure to watch your short, It’s Nice in Here. Thank you for your time. I did want to start off with a rather abrupt question: what inspires you? And, what drove you to create this short feature?

It was 2016 when multiple things coincided all at once; I was looking for a story that I could make my thesis film about, I had recently done an ancestry test in the process of unpacking my Blackness for the first time, and I was glued to my television screen after having just heard of more horrific instances of unarmed Black men being shot and killed by police officers. Bit by bit, the foundation of the film started revealing itself to me and with this framework in place, I started looking for the rest of the story in my own memories and experiences, and that of the people I met along the way. Although it might sound hectic, I actually really enjoy piecing together all these loose ideas and bits of inspiration, until I’ve assembled them into a rich and poetic tapestry of emotions.

The mind is a labyrinth of infinite possibilities, but it does give our sense of individuality with each memory and experience we have. I do understand your perspective about such stark brutalities; it’s a scary world out there yet important to take note of.

I happened to notice from your Instagram that you are a massive fan of animation and bring to light different characters (or people) for each post you’ve made over the years. Do you mind elaborating on this a bit? (My personal favorite is the post titled “Kiana.”)

Back in 2016, when I was in my final year of art school, I was looking at all the work I had been making and at all the characters I had designed, and came to realize that none of them looked like me. I was astonished by how my white environment had come to influence my art without me noticing, so I made it a point to focus on just drawing and designing Black people, and also tell stories with us at the center of it, because for most of my life I hadn’t. So, hopefully my Instagram will one day come to represent the characters I conjured up, the people I met, and my journey of having Blackness be my norm.

Yeah, no that sounds great. Build your journey as wise folks have said. You know, perspective is always an essential to ask in any situation, and I find it substantially moving in this short. The exploration of police brutality, friendship, and intuition are all prevalent between both main characters. Were you attached to Imani, or David, or both of their stances in this scenario? (If I may, I think they both are well-developed, as one carries that innocent nature while the other carries lassitude and confusion.)

Throughout every part of the process, we always started off with Imani first; from writing the script, to designing the characters, to scoring the film. In a way, she served as our baseline, through whom we wanted to explore the world, the story, and Crimson. We could approach every narrative decision and design choice with great care and familiarity, whereas David’s perspective felt a lot more foreign and difficult to get right. How would he see the world? What does it look like when you’re trying to justify your actions? How do you live with yourself?
We knew that we weren’t interested in a reductive rendition of him; a donut-eating police officer who hates Black people to his very core, because it’s so easy for people to not see him as human and therefore distance themselves from his actions. But by portraying him as a family man, we are also showing that it’s not necessarily a deep-rooted individual type of racism that makes him do something so abhorrent, but that it’s his implicit biases, the lack of training, and other systemic problems within the police force that are also at play.

Yeah, I believe we have this poor habit of judging others because there is such hatred/injustice integrated into our society in that we fail to recognize police officers’ duties. They are human like us, they breathe like us, and they live like us. And David is dealing with his struggles too; not everything is a golden beam of light for him. And after anyone partakes in such a disaster, the question is, as you mentioned, how do you properly move on? Great points, Mr. Koeyers.

So, it says online that you reside in Rotterdam, along with having studied animation from the Willem de Kooning Academy. Does the city’s history or architecture have any bearings on your work or imagination?

Rotterdam has come to mean a lot to me in recent years, especially coming from a small residential town in the north of the Netherlands. Perhaps it’s not so much the history or architecture of Rotterdam that draws me in, but definitely the people that make the city what it is. Rotterdam allowed me to see myself in other people and hear my native language being spoken every day I walk out the door. It felt like the city gave me the courage and, in a strange way, also the permission to center my stories around people that look like me. So, I’m a part of Rotterdam as much as it is a part of me.

That’s awesome, really cool. I hope to travel the world more in the future. Speaking of the world, the #BLM movement created such a significant change in the attitude around the world when it initiated during the height of the pandemic. How would you say it impacted this film and the characters?

As we were in the process of making this film, we heard of so many more Black people losing their lives in fatal police shootings. We were animating a scene in which a conservative political commentator speculates about the facts and creates his own narrative, or a scene in which only a small snippet of CCTV footage gets released, while watching these very things unfold in real life. That made it all the more painful in a way. The fact that we had based a large part of the story on people that came before George Floyd, Elijah McClain, and Ahmaud Arbery, showed us how never-ending and cyclical these shootings are.

Yeah, superb points. I had an interview with another film director last year (Mr. A’ndre Davis and his drama work, Attacked from All Angles), and one of the things that I had asked if there was a specific topic ranging from gun violence to systematic barriers that he wanted audiences to understand. Per Mr. Davis’s words, he wanted to address the aspect of accountability. Thus, is David’s position revolving around that, as he’s now riding a guilt-driven consciousness in the wake of his actions? Should we implore more to do so as well?

Sometimes it feels like our film calls for poetic justice, and we have toyed with the idea of showing David locked up behind bars at the end of the film, forced to live with the fact that he shot and killed a young Black boy. But in a every version of our film, that ending never felt honest. Unfortunately, we often don’t see police officers being held accountable for their actions.
So, we opted for an open ending which creates a space for the viewer to piece together their own narrative from all the little fragments and bits of possible leads that are sprinkled through the film. What do they mean and what do they all amount to? Whenever we look through David’s eyes, we see a world in which he has not yet been able to take accountability, but in that space that we open up at the end of the film, I hope the viewer can imagine an ending in which he might.

Your mentioning of the “poetic justice” almost made me feel vibes of Jordan Peele’s original idea for his brilliant Get Out work (the original ending was for the black protagonist to be locked up in jail after getting out of the main setting after killing off its dastardly white folks). But, indeed, the ending does leave that air open for analysis and for us to sympathize more with David’s position.

Are there any particular films/directors that have inspired your journey into dissecting the human condition?

Oh, absolutely! I’ve been inspired by so many different filmmakers for so many different reasons. Obviously, Kurosawa’s Rashomon has served as a great source of inspiration when it comes to structuring a story. More contemporary references include George Washington for its excellent narration and tone of voice, Moonlight for its intimacy and gorgeous photography, and The Tree of Life for its stellar structure and intuitive way of editing. Each of these films feel so small, yet colossal at the same time. To me, that feels like something that is so undeniably human.

All excellent works; I’m a huge fan of Kurosawa’s legacy. Is there anything else you’d like to express to the viewer regarding It’s Nice in Here?

We didn’t make a film that set out to give any answers, but were more interested in raising questions and exploring the after effects of police shootings; not only how they affect the people that were present during the incident, but also how these stories travel and take on a life of their own. By having the viewer take part and actively piece together the fragments of the story, we hope to create a sense of contemplation and introspection in an increasingly polarizing world. We show our characters being soft and sensitive, while simultaneously being perceived as threats. That duality is something I am all too familiar with, but ultimately by working on this film and by learning to love the skin in which I live, I’ve come to realize that, despite what I’ve grown up believing about myself, it’s nice in here.

Well put sir. Thank you so much for your time Mr. Koeyers, and I wish you the best of luck in your future endeavors.

Thank you so much, Shaan! That really means a lot to me. And thanks for the lovely and beautifully-worded review on your site.

It’s Nice in Here, an animated short, was directed and written by Robert-Jonathan Koeyers.