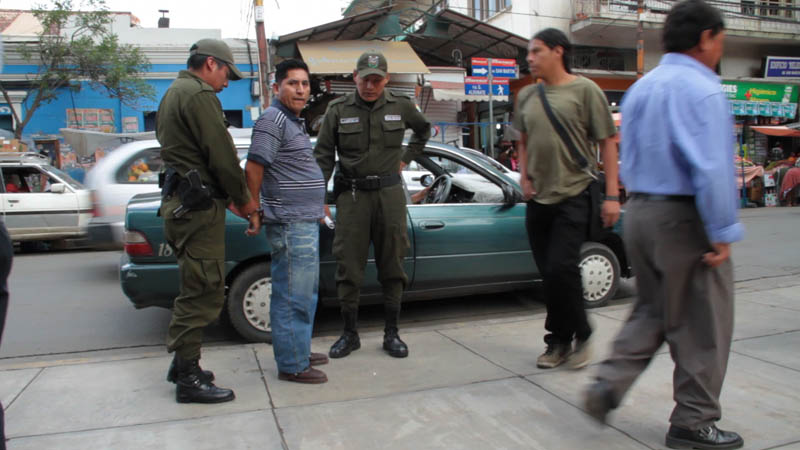 Reel 2 Real on January 11, 2018 0Likes At The Movies
ShareTwitterFacebookInstagram

Bolivian filmmaker Violeta Ayala fears for her life after she exposes the truth of the Bolivian government and society.

Bolivian filmmaker Violeta Ayala talks with ATM about two of her latest documentaries, “The Fight” and “Cocaine Prison.” Her first film highlights the harsh and discriminations of people with disabilities in Bolivia. Ayala follows a group of protestors travelling to La Paz in efforts to speak with President Evo Morales about this issue. While on their travels, they were faced with riot police and physical beatings by Bolivian police officers. In “Cocaine Prison” a brother, Hernan and his young sister, Daisy are forced to be succumbed in an environment filled with drugs. A brother lives his life as a drug mule and gets caught up into this lifestyle. Daisy fights to help me get free from one of Bolivia’s most notorious prison, San Sebastian. While her brother is in prison trying to get free, the sister is faced with a lot of temptations to join the cocaine trafficking industry. Both films unleash the truth about the Bolivian government and society.

ATM: Take us back to when you first got the idea for this project.

Violeta Ayala: It was a film that was not planned. We were in Bolivia also working on my other film “Cocaine Prison.” I remember a friend of mine told me about people were hanging on the bridges. I said to myself “why are they doing this?” What’s going on?” It was a striking image seeing people hanging in their wheel chairs. They had been protesting for months in La Paz, not far from my house. I saw them, but I only put money in their cups. When I started talking to them about hanging on buildings, I realized it was a problem. They said they are going to go to La Paz to protest. People in wheel chairs with no arms and no legs going all the way to La Paz. I did not think this was possible.

The press started to accuse me as being someone from the United States who financed this protest, paying 100 dollars per person to protest. If that was truth, then I would have the whole country protesting. We walked with them for 35 days. We believed that when we got to La Paz the President Morales would speak with them to make peace. It was a physical wall for them not to enter. For 110 days they slept on the streets of La Paz and fought against the government for their rights. It was unbelievable. They took pictures of my partner and I and saying we were CIA agents. I am an indigenous woman from Bolivia with only a little of privilege. The government could not stop the protest by force. The harder they tried, the harder they fought. I came in the protest with pity, and I came out seeing they had so much pride and humility. These were the strongest people I had met in my life. It was an eye opener as a human being.

ATM: What emotions stirred in you when you witnessed how the disabled people were treated?

It is disgusting to witness this sort of treatment toward people who are at a physical disadvantage. The violence in the film is only ten percent of what really happens. I put the camera down shooting how a police officer was kicking a man in a wheel chair, who was paraplegic, saying “Get up, I know you can run.” We all know they cannot run. The police want to provoke us. For me as a woman you are subjected to sexual violence. The policeman grabs them by their asses and their shirts. It is about showing your power over people you think you can oppress. People fail on supporting people with disabilities, not just the government, everyone should be there protesting. We are all guilty for this moment in history for Bolivia.

ATM: How do you think the Bolivian police, media, and government can stop abusing their power?

Violeta Ayala: This is happening all over the world. People who are black and have a disability are treated the worse. We are in the world where everything is shaking. I made this film, so the police officers can reflect on themselves, to see who the animals really are. A lot of people question me in my work. They ask why I talk about racism and why I talk about this. I say because it hardens my life today. If we do not challenge the police or challenge the power, then we will not see change. The children of the police can look at these policemen and say, “This is the kind of father I have.” I do not believe in being politically correct. I do not care about the power because it does not care about me.

ATM: In the film, there is scene with a disability man crawling on his bare hands and knees in front of police barricades, what was your thought process when you directed this scene? Did you at any moment wanted to put down your camera to stop filming and help?

Violeta Ayala: No, because on this day, they all were naked as a way of protest. They showed the reality of them. This is a way they are using mechanisms to make attention. I must tell what is happening. I am not there to stop what is happening.

ATM: If you were in the same position as the Bolivian disability people, do you think you could be courageous in protesting as they did?

Violeta Ayala: I am getting a lot of threats to my life saying I am ruining President Morales government and giving him a bad face by making this public. They say they are going to kill my daughter. I found out through investigations that there were Facebooks accounts from the government palace. This is very scary. I would have the strength to protest because I have the strength to document it. If I knew it in the end maybe I would not because when you must give so much. I cannot put them in my shoes because I am not a (pause) well I also have a disability. I have a muscle thing. I cannot tie shoes. It took me a while to dress myself when I was little. I do not think they even knew what they were getting into when they started this protest. They in a way made the government of Bolivia naked. They took all their clothes of the government of Bolivia.

Violeta Ayala: I think that war on drugs is a global problem. We talk a lot about drug addiction because it mostly effects the white population. We do not talk about the rest. It is nice to talk about Pablo Escobar and that kind of glamorization of the drug trade, yet we do not talk about who are in the middle. It was very important for me to tell the point of view of the ants, which is where it started. I did to not try to explain everything without saying what happened to Nixon and how he affected what happened in Bolivia. He declared the war on drugs. I wanted to focus on the problem in my country. I wanted to show how Mario and Daisy are like the little ants in this business, they are replaceable.

People have this imagination about the drug world, but we are dehumanized. We have lost our humanity in the eyes of the mainstream media. I wanted to show we have families and this is a global business that effects everyone. I would like to see a film like this made in the United States about the key to drug trafficking. I wanted to show the big complex problem through their eyes. The war on drugs is about control, racism, colonization, and slavery.

ATM: While shooting “Cocaine Prison” were their new things you learned about your hometown Bolivia?

Violeta Ayala: I learned the prison was like a microcosm of the country. Inside the prison you have the worst and best parts of humanity. I learned that corruption is much more serious. I do not believe we will have democracies in Latin America until the war on drugs is over in countries like Bolivia, Columbia, and Peru. Cocaine money founds our economics and underground economy. It is inheritably corrupted and so everything will be based on that. Everything is a hypocrisy. The war on drug is not just harming the Latino and black population in the United States, but it is harming all the Americas. We cannot see a future. The rich just become richer. The ones who are benefiting are politicians, bikers, and the economy. Only the one percent.

ATM: Honestly, do you ever think the fight against the war on drugs will ever end? At least in your lifetime?

Violeta Ayala: Maybe not in my lifetime. People take drugs and don’t even know why or what they are taking. In 100 years, we will look at people and ask what we have done to our children. Everyone is suffering. I deeply believe the good is always better than the bad. In the past alcohol was prohibited and it did not make any sense. We can fight this. We need to stop making people of color and minorities guilty of everything. They cannot keep paying this price. You will go do these things to have opportunities to live life. Think about crack, you go to jail. Whereas if you were caught with cocaine you did not. Most of the people with crack were black. This cycle of violence, control, and power keeps reciprocates to all the Americas. I have not seen white people in Bolivian prisons. They never got caught. They are the ones doing it and benefiting. It is not about catching anyone. It is about control and pretending to stop war on drugs.