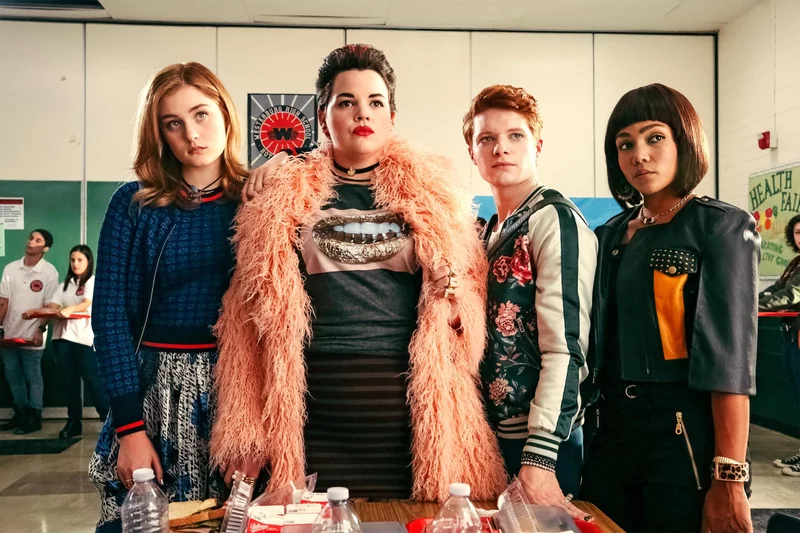 Movie Reviews, News on June 9, 2018 0Likes At The Movies
ShareTwitterFacebookInstagram

The hotly anticipated TV series rework of Daniel Waters’ 1988 classic, “Heathers,” has officially been dropped by Viacom as of June 1. This new revelation comes as no surprise to the general viewing public, as the series faced controversy when it planned to premiere in March but was delayed in the aftermath of the recent school shootings at Stoneman Douglas High in Parkland, FL and Santa Fe High in Santa Fe, TX.

While Paramount Network, the company underneath Viacom’s watch, initially was set to air on network TV Land on March 7 but delayed the release officially on February 28 in light of the recent school shooting.

“’Heathers’ is a satirical comedy that takes creative risks in dealing with many of society’s most challenging subjects ranging from personal identity to race and socio-economic status to gun violence. While we stand firmly behind the show, in light of recent tragic events in Florida and out of respect for the victims, […] we feel the right thing to do is delay the premiere until later this year,” Paramount said in a statement to the press.

Before the February delay in release, the pilot episode of the show was posted online to Paramount Network’s website to spark public interest but was pulled within a week. Paramount deleted the web page containing the trailer and the episode is no longer available for streaming anywhere online.

Following the Santa Fe shooting, the series was delayed yet again, and aimed for a July release. But alas, the series was ultimately pulled entirely on Monday, June 4 by Paramount. Production of the first season concluded in fall of 2017 and the second season was already written and waiting for the green light to begin production. Viacom and Paramount found the subject matter depicted in the show to contrast their media messages of anti-gun violence and school safety.

“This is a high school show, we’re blowing up the school, there are guns, it’s a satire. It’s hitting on so many hot topics,” said Paramount president of production Keith Cox.

But.. maybe it’s best that the series will never see the light of day.

It was clear in the now-extinct first episode (which the writer of this article viewed on some pirate site) that the high budget and neon, flashy production value couldn’t save the show. It seems that producers spent too much money on a large quantity of elaborately-designed, chic sets but not enough to hire writers to create a halfway-decent script.

In this new age, “pitch black comedy” “Heathers,” minorities now run the school, starkly contrasting the all-white, all-straight cast of the original film. This time around, a plus sized, body positive Heather Chandler is the most popular kid in school who is looking to be the “new face of suicide,” alongside the other two backup Heathers: one a black lesbian with a bob, and the other genderqueer. Such diversity has no precedent in popular teen film, which is why it comes as a shock that something so right came out so wrong.

The first moments of the first episode of the show witnesses the suicide of JD’s mom, played by Shannen Doherty, who shoots herself in the face after setting her house ablaze. And then it only goes downhill from there.

Unfortunately, despite the diverse casting and promises of a politically correct masterpiece, all attempts at good television fall flat. The characters within this new “Heathers” universe are too unlikable to watch, too vain and self-centered for audiences to empathize with. Instead, these teenage students are flat, tech-obsessed stereotypes having sex in cars and only concerned about how they look in their Instagram selfies. While the sentiment was present, it fails to elicit any genuinely realistic depictions of high school life, lacking substance and any personality behind Emoji-ridden text messages and trendy Forever 21 outfits.

Plot wise, the scenes move overwhelmingly fast and don’t even let the viewers stop to breathe and glance around at the interior design of the set pieces. Its inability to stay grounded and keep the audience invested or focused leads the show to a lack of laughs and abundance of ridiculous references. Like a treadmill moving too fast, it’s hard for the viewer to keep up with the overcooked, try-hard Nazi jokes and wildly wacky wardrobe. Newsflash: it’s 2018 and nobody says “hermaphrodite” or uses a shake weight anymore.

Westerburg High, where viewers initially fell in love with Winona Ryder and Christian Slater’s acting as Veronica and JD, is now diluted with pretension and overdone visual stimuli. The high school we see has metal detectors at its front doors and a Khloe Kardashian quote on the marquee outside.

While some subversion of the original plot is a tad bit entertaining to watch, it entirely misses the point. Rather than dying from sipping on drain cleaner offered to her by Veronica, the new Heather Chandler now chokes to death on a mouthful of suicide pills corn nuts – because of course a plus-sized girl would die that way. But the best part: she doesn’t actually die, and instead comes back to life vomiting out the nuts and pledging vengeance on Veronica.

In another twist, rather than seeing Heather Chandler’s righthand woman Heather Duke rise to power after Chandler’s untimely “suicide,” we instead see Veronica’s former nerdy Asian friend Betty Finn as the new popular girl in Westerburg.

To put it bluntly, it’s a lot to take in. Not only does the 42-minut pilot seem rushed and thrown together, it somehow even drags on in even its quickest scenes. The 42 minutes actually feels like you’re watching an hour-long episode, but that hour long episode is playing at double speed. It’s very easy for a viewer to lose their footing watching this horserace.

The only potential the series had was its nice wardrobe styling and representation of minorities in a positive light, the latter of which was completely absent from the Daniel Waters’ classic.

Maybe it’s best that school was cancelled at Westerburg High when Viacom pulled the plug on “Heathers.” Maybe with our newfound time and break from classes, we can watch some quality television instead.

‘THE EYES OF TAMMY FAYE’ REVIEW