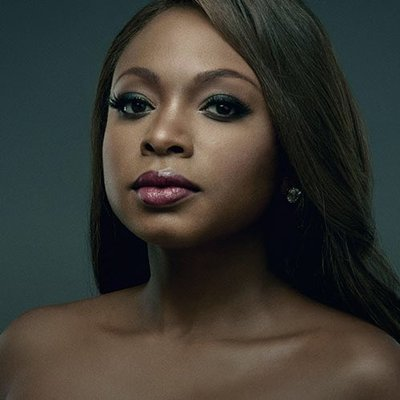 Entertainment News on July 1, 2018 0Likes At The Movies
ShareTwitterFacebookInstagram

Naturi Naughton plays Tasha on Starz hit drama series Power, whose married to a drug dealer and is not afraid to get her hands dirty. ATM talks about the highly anticipated season premiere today.

ATM: Describe the difference in Tasha in this upcoming season 5.

NN: One of the key differences is that Tasha has lost her daughter. At the beginning of the season, you really start to see how broken, vulnerable, and emotional Tasha acts. The other seasons, she was so snatched, put together, glamorous, living the perfect life, but now her life is in shambles.  Her husband was cheating with Angela and left. Tariq is a hot mess going into the drug life. Raina was shot and killed because of something her son was involved in. It is the most broken and raw you will see Tasha.

ATM: Tell us the difference and similarities between Tasha and Naturi.

NN: I do not think I have the number of balls as Tasha. She is married to a drug dealer, she slept with a driver, messing around with a lawyer. She is more free. Tasha has more courage than Naturi. I am more conservative and pulled back. We both have children, are opinionated, fight for our family, and avid about being good mothers.

ATM: Describe a day of production.

NN: For me, I would wake up at 4:45 in the morning. We have a crazy earlier start. At this time, I was pumping breast milk. I would make

sure my baby was good before I went on set. Hair and makeup started at 5:30, which takes two hours. We start shooting at 7 or 8 am. Usually, there is a scene with Omari and I arguing as we shoot. This season 5 was challenging because sometimes we shot outside in the snow, rain, or windy weather. The best part is that we get to go to do our job working with people we actually like. These are 16 hours days and 12 hours is the short day of Power.

ATM: Congratulations on motherhood. You embodied a character that was a mother. Now being a mother how do you look at your character Tasha different.

NN: Thanks! Oh, my goodness. That is so deep. As a mother, I look at the character differently because I understand the feeling of doing whatever it takes to protect your child. I understand the feeling of wanting the best for them and willing to sacrifice your life for their survival. In season four, Tasha told Terry she does not want to keep seeing him. Also, that she is willing to take the fall for Tariq. This is what mothers do. We give the ultimate sacrifice for our children. I feel so much more connected because I have bought life into the world. It is a huge responsibility.

ATM: I found a quote you once mentioned “I think a lot of young people don’t realize the price of fame is a lot higher than they imagine.” Explain more on these words.

NN: So many people watch T.V, looking at reality shows, watching music artist perform on stage. These young people think they want this life but do not fully understand the challenges, sacrifices, time, and investment it takes. I try to tell young people that it i great you want to be an actor but be prepared for rejection. If you want to be a singer or an artist, then be prepared to be lied to, money stolen, and also rejected. For anything in life, we have to prepare ourselves. It is such a glamorous aspect to the industry/Hollywood that we get lost in this glamorous glitch. We forget there is a lot of hard work behind it. Do not get in this unless you really really love it, are committed, and willing to do the work.

ATM: Naturi, how do you personally work in Hollywood and not lose your soul?

NN: I do not lose my soul because I am a believer and a Christian. I believe my soul is in God’s hands. I try to stay around positive people making sure I am right in my life. I guess some people could lose on the way in Hollywood. Especially, it is easy to lose your way or your soul. I stay prayed up. I make sure I keep myself humbled and grounded. At the end of the day, I could have been a girl from East Orange, New Jersey who did not make it. I did not have to be in this position. I thank God I am living my dreams because it does not have to go this way.

ATM: What is your perspective of Power while you are watching at home?

NN: I am a Power fan to the fullest. It is surreal. I am also watching the other cast members kill it. It comes off as one of the best shows on T.V. I am just saying this because I play in it. Courtney Kemp is a black woman who creates and writes the show. I am in amazement to see what happens next. I am just as much as a fan like everyone else.

ATM: Do you self consciously critique yourself while watching this show?

NN: I do. I try to not be too hard on myself. I have the moment where I say, “I should have had another take.” I might not like how my face looked or I should have sucked it in a little more. You are trying really hard to look great. I try to be more conscience of the mistakes I made. So, I can do better once I go back on screen for season 6. I want to keep growing and getting better every day.

ATM: Lyrics from a song you once song in the remake of the movie Fame, “Hold your dreams, don’t let it go.” I know there is resilience, but how can a person hold on to their dreams while constantly being rejected or someone does not believe in them?

ATM: What are your favorite types of scenes to shoot on Power?

NN:  My scenes with Lala. I love working with Omari because the writing is so great. The scenes shift and swift. I love playing emotional scenes on camera.

ATM: Is Tariq going to keep irritating and frustrating us? (Laughs).

NN: (Laughs). I know people cannot stand my child Tariq. Keep watching because his character grows this season. Do not sleep on Tariq.

ATM: Explain your overview of how Power presents marriage as a whole?

NN: Honestly, our marriage might be more real than we hope. There is a lot of infidelity and brokenness. This is a real marriage that the show. This is not a commentary on the perfect marriage. This show does a good job showing the difficultness of marriage. Also, how you have to stick it out when you want to give up.

Tasha is still grieving after the loss of her middle child. The St. Patrick family is now at its worst for revenge. Naughton’s character will show a more raw and serious side than in other seasons. The family drama and even more secrets will continue to unfold. Power Season 5 premiered today on Starz. Catch Power every Sunday on Starz.