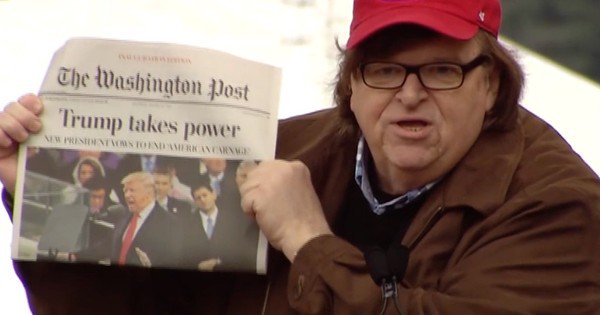 Entertainment News on July 7, 2018 0Likes At The Movies
ShareTwitterFacebookInstagram

A play on his groundbreakingly successful and the highest grossing documentary of all time “Fahrenheit 9/11,” controversial director Michael Moore’s new documentary will discuss the events leading up to and the aftermath of President Trump’s win in the 2016 election. Moore was a staunch anti-Bush liberal in the early 2000s and received a lot of backlash for his strong viewpoints concerning the Iraq war.

When it comes to the current immigration crisis, Moore told Colbert “It would be one thing if it were just political differences, but that’s not what’s going on now. We’re talking about thousands of children being kidnapped and put in jails. The only way that we’re going to stop this is eventually we’re all going to have to put our bodies on the line. We all have to start responding.”

Moore will be releasing his new documentary through Briarcliff Entertainment, founded by former CEO of Open Roads Films Tom Ortenberg this September.

“Michael Moore’s ‘Fahrenheit 11/9’ is a provocative and comedic look at the times in which we live. It will explore the two most important questions of the Trump Era: How the f**k did we get here, and how the f**k do we get out? It’s the film to see before it’s too late,” the synopsis explains.

Watch Moore discuss his new project on Colbert’s show below.

OWN Celebrates Premiere of “Ambitions” in Atlanta