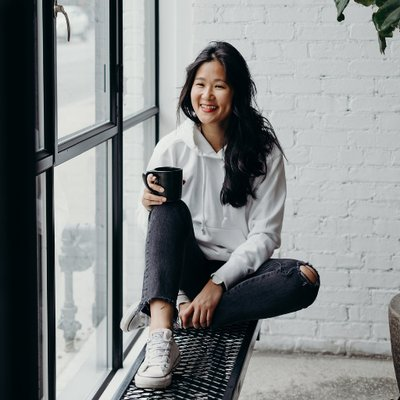 Entertainment News on July 10, 2018 0Likes At The Movies
ShareTwitterFacebookInstagram

Asian filmmaker Sherren Lee loves making films that highlight the struggles and realities of real life situations. Her most recent film The Things You Think I’m Thinking is one that shows how a black male burn survivor who is also an amputee, reconnects back to his social life and relationships. This film has won Best Canadian Short at 2018 Inside Out Film Festival and the AWFJ EDA Award for Best-Female Directed Short at the 2017 Whistler Film Festival.

ATM: Take us through the synopsis of the film.

SL: It is about a burn survivor named Sean who goes on a first date since his accident. It is a story about the fact that we all have demons, and this is a vulnerable place to be starting out in a relationship. We tend to project our own fear onto the other person when it is really about ourselves. We forget to think that the person lives a different reality.

ATM: What is your recipe for overcoming your personal demons?

SL: It is a constant reflection on trying and attempting to get to the root of why you feel a certain way. I have been lucky myself to find and go to therapy. I continue to do the work and dig deeper into why I am the way I am. You have to be willing to talk to people and put yourself out there. You have to seek experiences that make you feel uncomfortable.

ATM: I thought Sean was just a normal guy. I did not recognize he was a burn survivor.

SL: It is funny you say that because there have been close friends who have questioned us putting makeup on him. I responded, “That is the way that he looks.”

ATM: Wait! His arms and his skin are really him with no added makeup?!

SL: (Chuckles). It is 100% him. I have friends that ask how we did the arms and put the effects on it. There is no makeup or special effects.

SL: He was a black male. It is funny because the media has not mentioned it. People do not understand how fire or burn

marks affect the skin. Some people believe that the burning made him black. He is a black man.

ATM: How did he survive the incident?

SL: He was in a fire and his roommate dragged him out. He was unconscious. He was the only person in his house that did not make it out in time. Everyone else heard and smelt the fire. They heard the alarm and got out. They went and realized he was still in there. His roommate ran back into the house and dragged him out. He was lucky to have survived with all the burns. They’re all over his body. Now, he is back acting.

ATM: Why didn’t you implement elements of our Asian culture in this film?

SL: Jessie LaVercombe who plays Caleb brought me the film. My work, in general, has been about homosexuality. I have not yet had the chance to make a film about Asians. I am a straight female; however, my last two shorts have had characters from the LGBTQ community. I like to make characters who are of the underrepresented. This film had two gay characters, but this could have been anyone from various backgrounds. This is my way of saying I am an Asian person. My life is not all Asian. I am living here with a life that is very similar to those people who live here. I am not saying one day I won’t make a film about Asians. The one thing I wanted to do is not have characters who are underrepresented play the part they are expected to play.

ATM: How did you pick the title for this film?

SL: The title is always difficult. Ultimately, the title is about what the film is trying to say. We think it is a lot of people’s state of mind. We are always thinking about what others are thinking. Also, we assume a lot of things. I wanted to flip it in a way saying those things are not true. What a person is thinking in their head is not what I am thinking. We picked the title because it sums up the film.

ATM: What do you want your film to teach an individual?

SL: I hope this film teaches people to be less uncomfortable with a disability or someone who is not like them. I was not interested in making a film that portrays Sean as a character with pity. Often in films, you see people become friends. I wanted to put them in a reality that was different than everyone else’s. I wanted to show a person living in the same reality of everyone else. They have birthdays and friends. Just because a person has a disability does not mean their life is a mess. To show we all have problems.