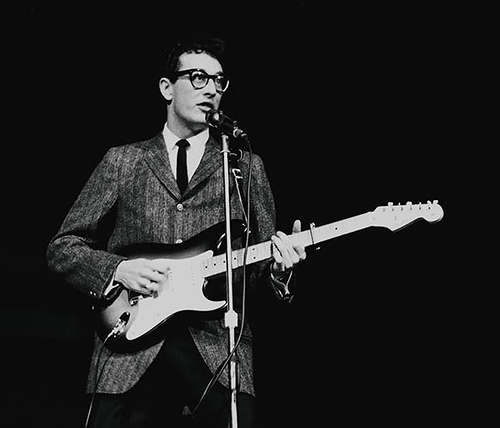 Approaching the 60th anniversary of rock and roll singer Buddy Holly’s tragic death in a plane accident, a new film is in the works to celebrate the 1950s music icon.

Holly left behind two solo albums as well as a group album with his band “The ‘Chirping’ Crickets.” He married Maria Elena Santiago in 1958 two months after first meeting. Maria was carrying his first child but miscarried soon after the news of his death. Santiago is 85 years-old and partially blames herself for Holly’s untimely death.

“I was not feeling well when he left [for] that tour. I was two weeks pregnant and I wanted Buddy to stay with me. It was the only time I wasn’t with him. I blame myself because if I had gone along, Buddy never would have gotten into that airplane,” she told the Avalanche-Journal in Texas in 1959.

Shortly after takeoff, Holly, his bandmates, and local pilot Roger Peterson the plane crashed fatally into a cornfield near Mason City, Iowa. Rather than travel by bus as they usually did in the bitter Midwestern cold, the group collectively decided to fly.

The flight had taken off during inclement weather and Peterson wasn’t certified to fly the plane without visual flight rules (VLR) and subsequently lost control of the aircraft. Everyone on board was declared dead on February 3, 1959. The unfortunate events have since been billed “The Day the Music Died.” Holly was just 22 years old.

“Clear Lake” has an estimated budget of $12 million and set to begin production the same year as the 60th anniversary of Holly’s death. Holly’s widow Maria is collaborating with creative executives Patrick Shanahan and Rick French to produce the film named after the plane’s crash site.