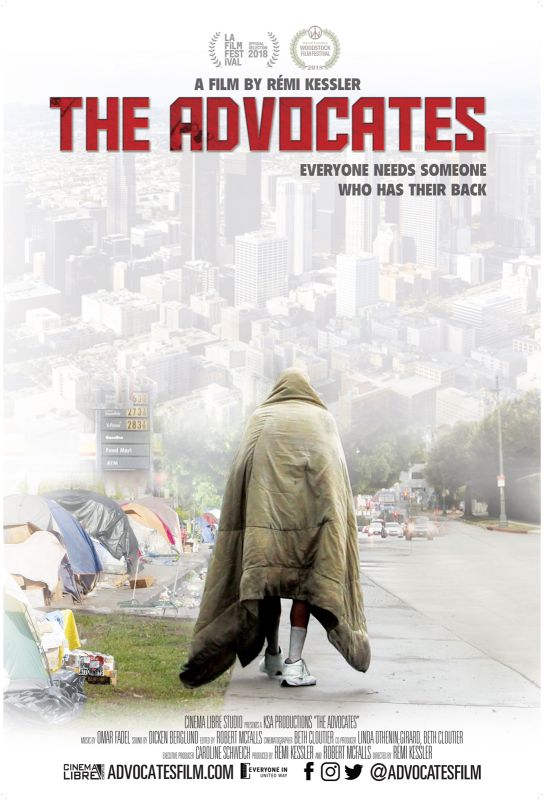 Reel 2 Real on November 13, 2018 0Likes At The Movies
ShareTwitterFacebookInstagram

Remi Kessler directed and produced the film, The Advocates, that looks at the struggle of homelessness in the LA area. and shows a different perspective of the social problem. Remi discusses with ATM about the film and the effect of homelessness.

Gaby: How do you feel America and this world treat homeless people?

Gaby: Although there are organizations for homelessness, why do you feel it is not focused on?

Remi: I think that we do not recognize that people who are sleeping on the streets are just regular people like you and me. I think this is really the first thing. We need to look at them and acknowledge they are a human being. This is what is missing right now.

Gaby: How does your film add to what is missing in the representation of homeless people?

Remi: My film does not represent what is missing in homeless people. My film will show what a community can achieve when they get together. This is what the film is about. There are solutions. The film shows what do we need to do.

Gaby: Express your most turning point when shooting this documentary.

Remi: The turning point I had was about five years ago. I was sitting at a lake in Los Angeles with a friend. We were having a cup of coffee. A gentleman came and asked me for a dollar. I turned him away. My friend took out a dollar bill. I asked what that was all about. And I said who am I to judge them. Somehow this was the turning point for me. I started to wonder why I was angry. It took me some years to understand why I had these reactions.

I looked at this gentleman in Brooklyn Heights in LA. I asked him how he was doing. I looked in his eyes. What I saw in his eyes was my turning point. When you start caring for these people and you want to wonder what happened to them. I thought maybe to do a film to express my own journey with people that send them away to someone who could bring in a conversation with these same people. It took a long time. I did not want to film out of misery.

Gaby: How can you say their mentality transformed from once living adequately to living a homeless lifestyle? How do they perceive life now that they are living below the lower class?

Remi: They feel invisible. People do not talk to them. This is terrible because the more they feel like this the more they think this way. I have seen many times once you stop engaging with this people, they come back to you. You can very quickly forget they are sleeping on the streets.

[I once was] flabbergasted after witnessing the conversations of homeless people. It was surprising because we say they are out of society and they use us. They are just regular people even the ones with mental illness. They have the same concerns and the same needs. It is very easy once you understand this to communicate with them.