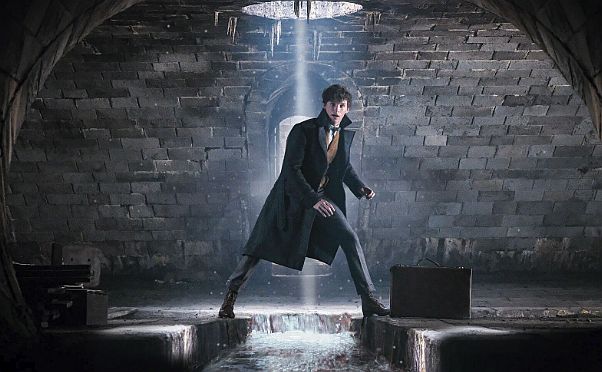 Movie Reviews on November 24, 2018 0Likes At The Movies
ShareTwitterFacebookInstagram

David Yates and J.K. Rowling bring the magic back to the big screen in the second installment of the Fantastic Beasts series, Fantastic Beasts: The Crimes of Grindelwald.

Taking place in the Harry Potter universe during the 1920s, Newt Scamander (Eddie Redmayne) travels to Paris to find Credence Barebone (Ezra Miller), a boy with the power of the dark magic parasite known as the Obscurus. Along with the help of his American friends witch Queenie Goldstein (Alison Sudol), muggle Jacob Kowalski (Dan Fogler), and witch Tina Goldstein (Katherine Waterston), the crew discovers secrets along the way including dark family pasts and the involvement of dark wizard, Gellert Grindelwald.

Despite the film being called Fantastic Beasts: The Crimes of Grindelwald, you don’t really see much of these crimes. As a

matter of fact you don’t see much Grindelwald either. Yes, Johnny Depp makes his official character debut as the dark wizard and sworn enemy of Albus Dumbledore. However, any appearance he makes in this film is just small subplots.

A big problem with this film is that it tries to tell four different stories at once, essentially seeming more like a bunch of subplots smashed together to make one movie. The film at times is very hard to follow, with too many unexciting plot twists thrown in just to keep the time limit of the film going. The film is visually stunning and introduces new magical creatures, however it lacks any of the heart or charm that the original Harry Potter series gave audiences.

The film is top box office in North America with $62.3 million, however this is a 16% drop from its predecessor film. It also marks the lowest opening for a film in the Wizarding World franchise.