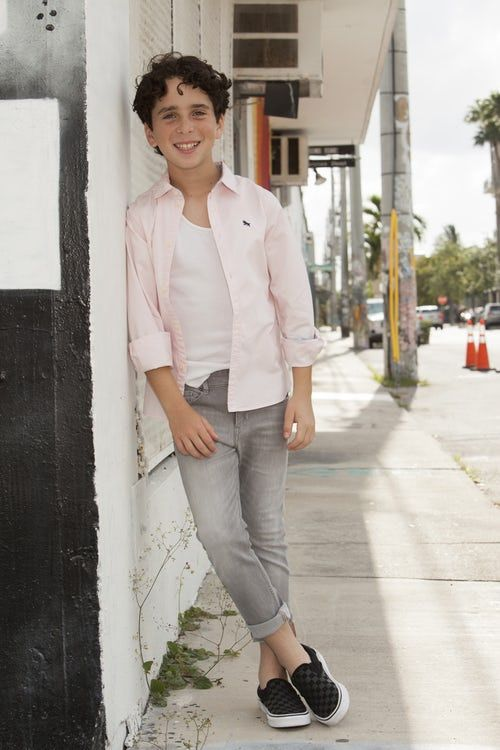 Interviews on December 21, 2018 0Likes At The Movies
ShareTwitterFacebookInstagram

ATM: Aside from the film, how important is family to you?

ATM: From your answer, how are those aspects seen in the film?

JD: Through the movie, my character Otis’ relationship with his sister Charlie becomes stronger. We become more like brother and sister relationship. You can see our bond strength in becoming more compassionate with each other. We share more love compare to the beginning of the movie. In the beginning, I am a typical bratty and nerdy little brother who does not take kindly to his sister.

ATM: How can this lack of a bond in the beginning influence a brother and sister relationship?

JD: It can influence it pretty strongly. It is family before all. If you truly do not have a strong relationship with any of your family members, then it can get bad sometimes. It is not a typical relationship you would like to have. Having a strong, nice, compassion relationship between family members is important.

ATM: What are ways that you work in your comic relief personality?

JD: I a bit animated. I am potty and bratty. I bring a bit of comedy to the movie. Instead of just being stubborn and straight up me, I make the scene funny. This is a great mix and audiences will love to see it. I also bring a light-hearted characteristic to the movie because of my relationship with my sister Charlie and how it strengthens as the movie progresses. I also bring a kind of action to it. I do not know why but I kind of intensify a couple of the scenes a little bit.

ATM: What characteristics does Bumblebee bring to the movie?

JD: He is sort of a human. Sometimes he is clumsy and a bad ass fighting other robots in transformers. He brings a lot of comedy to the movie through his clumsiness. He brings a real light-hearted and kindness to the movie because of the way he reacts to Charlie and how their relationship is.

ATM: What were your observations of Charlie’s character being 18 years old trying to figure out her place in the world?

JD: Like you were saying, she just turned 18. She is tomboyish. The period is the 80s. She does not fit in. There are mean girls and they are bullying her of course. All she wants is to feel loved. Our father passed away. She calls it Otis’ stepdad a replacement. She has not really adjusted to it yet. She does not really have anyone in her life to love, care, and be kind to her.

ATM: How does this film add to the Transformer’s franchise being so legendary and iconic?

JD: This Transformers movie is going to go on a different route than the other ones. The other ones were focused on action, explosions, and robot fighting. Here, it is a bit more comedic, light-hearted, and you do not lose the aspect of the fighting in the war. This is not all that it is focusing on. This is why I like the movie.

ATM: Being born in the 2000s and not the 80s, what are some interesting things you learned about this period? What were some differences?

JD: I have learned about the differences between the 80s and the current day. The clothes are so much different than what people wear today. Technology and video games are much more different. The 80s was an extremely simpler time than this decade.

ATM: What were your observations of the dress code during the 80s?

ATM: Does your likeness for things fit more during the 80s and its style than the 2000s?

JD: Yes, it is a lot more different.

ATM: What differences did you notice about how people socialized during this time?

JD: Typically, cell phones did not exist. You had to dial your friends’ number, memorized it, and take out your phone book every time you would want to call them. Bikes! People rode bikes a lot more back then to hang out with their friends. Nowadays this is not done as much.

ATM: You noticed that with no technology people became closer?

JD: Yes, this is a great way to define it. They were a lot closer. This was instead of sitting behind your cell phone or computer. You actually went to their house, and people did it face to face.

ATM: What were some similarities with the 80s and now?

JD: The music style. Rap is still more popular. Rap itself has changed for sure. Video games, but they are a lot more advanced. The graphics are so much better. They took the same route as the ones now. The storyline was the same as a princess. There is a different generation of technology. Relationships with friends were better, but I think people still want to go over each other’s house to see them face to face. There are a lot more differences than similarities.

ATM: What do you gather what the 80s represented coming from someone who was born in 2005?

JD: It seemed like a light-hearted time. Nowadays people focus too much on what people wear, what they do as a living, and their hobbies. Back then, during the 80s . . . I have never lived during this time, but people were more humbled than this time. Social media was not around. This blocked off a lot of things that are available in the current day.

JD: Yes, this is a good way to describe it.