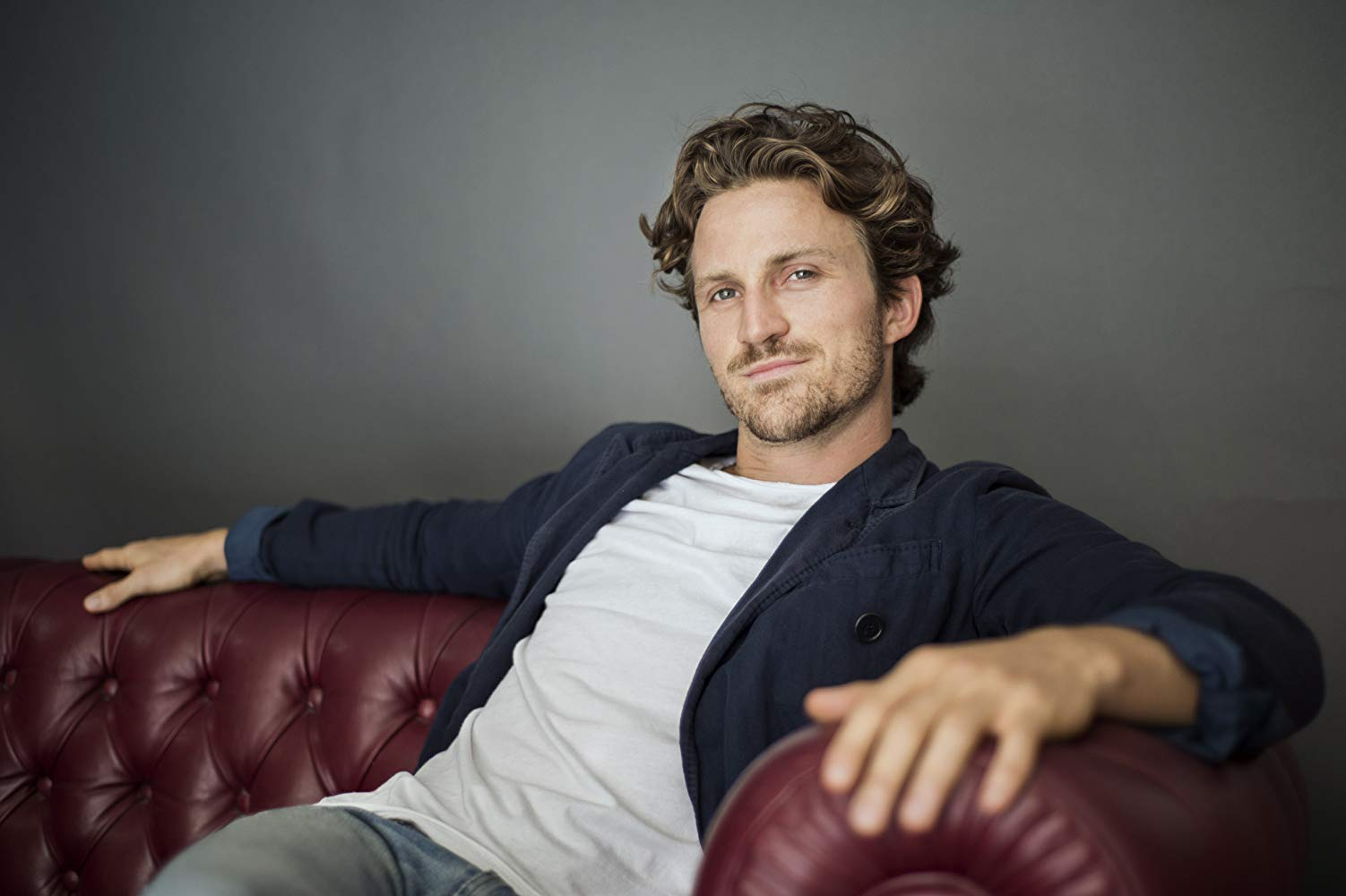 Interviews on December 23, 2018 0Likes At The Movies
ShareTwitterFacebookInstagram

Leonardo Salerni plays a male escort and helps the main character in Postcards from London find his way. He speaks with ATM about the culture in Europe versus the culture in the United States.

ATM: Do you feel there are more hidden ways of living than what is shown to us?

LS: The main character is discovering life. He has been in a small little town in the suburbs in London. He has always been in this little village. He makes this step to see what is outside of this village. He entered a situation where he finds all the evil and all the people who want to use him. I had a similar experience while moving to New York at 20. It was wow for me moving to New York at this age.

I was having experiences and falling my instinct. Everything was a discovery. I do not think it is good or bad. You get both when you enter this life. You become more aware of what surrounds you and different people. It is about discovering life. This happened to my character before. He is more aware and has more experience because he has already discovered a lot of the world that surrounds him. The main character is now going through it. I can see in him how I was years before.

ATM: Do you agree that working as a male escort is defining a male’s sexuality?

LS: These are escorts that go with men. I have read things about male escorts that go with both men and women. They did not see themselves as this or that. For the money, they go with men. For the money, they go with women. It is like a job. In this case in the movie, we have our clients as most men. I would not be in a label that this is a gay-oriented movie.

ATM: How can life be perceived differently by someone living in a small town versus someone in a big city?

LS: A guy that comes from a small town and goes to a big town is like an alien. Someone that comes from another world completely. It’s something that is never seen. Like in the 30s, 40s, and the beginning of the century when a lot of Italians used to go to New York. They would arrive at the skyscrapers and say, “wow we are in a completely different world.” They were discovering for a part of the world that was not even in their imagination and not possible. It is the difference with someone who grows up in a world where this is normal. Like if someone grew up in London, then it is normal for him to see drag queens or two men holding hands with each other. This does not happen in a small town.

ATM: What does the constraints put on the male character expose about the body? Is his body still seen as a body or an object?

LS: We are playing with our body and selling our collection. You do not have that much time to get consumed after a while. You have time to say you are doing your best for these five years. You get as many clients as you can and get the money and do other things. The clients may want someone in the business that is younger, prettier, and smarter. You see in the scene for a small period. People want something new and not seen before. You get five years and then you have to let go.

ATM: How does the exposure of the art dictate how one might want to view this film?

ATM: What differences did you discover about how a female escort moves her body compared to a male escort in this line of work?

LS: We are male, so because of this we have a more active kind of role. For women escorts, they are received. As male escorts, you have the chance to be the one that is in control. Let me think about this for a second.

ATM: What comes to your mind when thinking about a female escort?

LS: A female is wanting to sell her body and offering love for money.

ATM: What about a male escort?

LS: The same concept of course.

ATM: I would think there is a difference in their approach and how their clients approach them.

LS: The clients are different ranges of ages. You get a young guy who wants to experience women. They pay the escorts for sex. You get the old man or the 40-year-old man. For male escorts, you get to arrange things with much older range of ages. This is the difference. The clients are older and what something else other than sex. They want a relationship with the person they are paying with. They want conversation and dinner. Because the range of ages is different, you get different conversation. I have never really thought of it. It is very far from who I am.

ATM: For example, there is a party, and you see a female escort. Whether they are male or female, their approach is different. They will call her names to get her attention. Whereas, for a male escort, they will use nonverbal communication vs. with a female escort they will use derogatory names to get her attention. How does the main character and your character embody his male sexuality?

LS: The main character Jim is a very attractive male, young man, and of course he wants this as a tool to express his sexuality. My character knows he is attractive to other people. This creates a flow in me in this way. Sometimes you get excited or get horny or get drawn into. You are desired. The way people desire me is exciting to me. It makes me feel like I am in a power state. It makes me feel like I have power over someone because someone is drawn to my sexuality and my aspects. This creates a gain of power over someone. You have power over someone that is desiring you.

ATM: The person that is desiring you takes a submissive role. You are taking the powerful role knowing you have the power to play for the emotions. You know while they desire you, they are not mentally themselves. How would you define a male’s sexuality? A male uses his wits, word play and looks to get a girl.

LS: A female does the same, doesn’t she?

ATM: A female might show more of her body to reel the man in. It is not the same when a woman does it. Do you think there is a difference in how they approach sexual encounters?

ATM: Yes, it has changed. Some men might be intimidated by the look of women which makes them not talk. It makes it so that the women have to approach them to say, “Hey, I like you.” The guys have become shy.

ATM: Or intimidated. If you see a nice woman, then it might make you shy.

ATM: How would you describe the energy in Italy’s family style?

LS: In Italy, the dinner table and family is like a ritual. Food is like a ritual. Someone has been prepared by the mother. To be eating and sharing something with the family is a big tradition for us. It is very English in a way as it is shared in the movie. It is just Jim and his two parents. They are eating English food. It looked cold. As for me, there are four siblings. In the past, I had dinner with my grandmother and aunt. People are shouting at the table. There was chaos and it was like a scenario. It was kind of midland England cold. It was very contained.

ATM: You all do not sit in separate rooms to eat?

LS: No, never. Not in a million times. It happens sometimes. Sometimes my mother would say let’s watch the Simpsons. It was kind of a big event. For the rest of the times, we turned off the times to be with each other. Now, if I am checking my phone for dinner, my mother is like put away your phone. Do not use your phone at the table while having dinner.

ATM: What are your observations on London in their family style?

LS: I have a few friends from London. I have never had dinner with them in a family setting. It is a much more international city. Families are more open to other cultures rather than midland England. These are the culture side scenarios. The English people I know are more open to different cultures. They live in a city with different cultures. They are used to seeing and living in a multicultural society. It is more open-minded.

ATM: How do you see America right now in your own words?

LS: I used to live in New York for almost three years then I moved to San Diego. I did drama in New York at Strasburg. I loved to be there. It was the best time of my life to be in New York. There is a kind of similarity in the film. I had just arrived in New York. I was drawn to the lights, partying, sex, and discovering different people. I was kind of a Jim in the film. I was going through the whole process of discovering myself. Now, it has been five years since I have gone to the United States. I have been busy here. I did not have time to go to the United States.

ATM: To catch you up we have a new government.

LS: The United States is in a very difficult movement culturally and politically. I left just before the storm. I lived there during President Obama. It was good. Now it is very hard for you being represented in the world by such a man. I am sorry for you. I feel pity for you. You have a big cultural representation. You have Hollywood, and you create big artists. Now, being represented by this man is the opposite of what most of the people in the United States want to be represented by the world. New York is not America. San Diego is mostly Republican. There is East and West Coast midland. I did a road trip from San Diego to Miami. When you drive through East and West Coast you understand a lot of things.

I drove through it for hours and hours with nothing around. There was only a McDonalds, a gas station, and a Waffle House. I started to think who lives here and what is their reality? They are surrounded by nothing. What is their daily life? How do they think? It is fascinating. It is a completely different way of living than growing up in Europe. Think about someone who lives in San Antonio, Texas who never left the United States. What is their reality? What do they know about the world? I read something like 70% of the U.S has not left the country. This was years ago. Now, it might not be like that. Where are you from?

ATM: I am from DC. Have you ever been to DC?