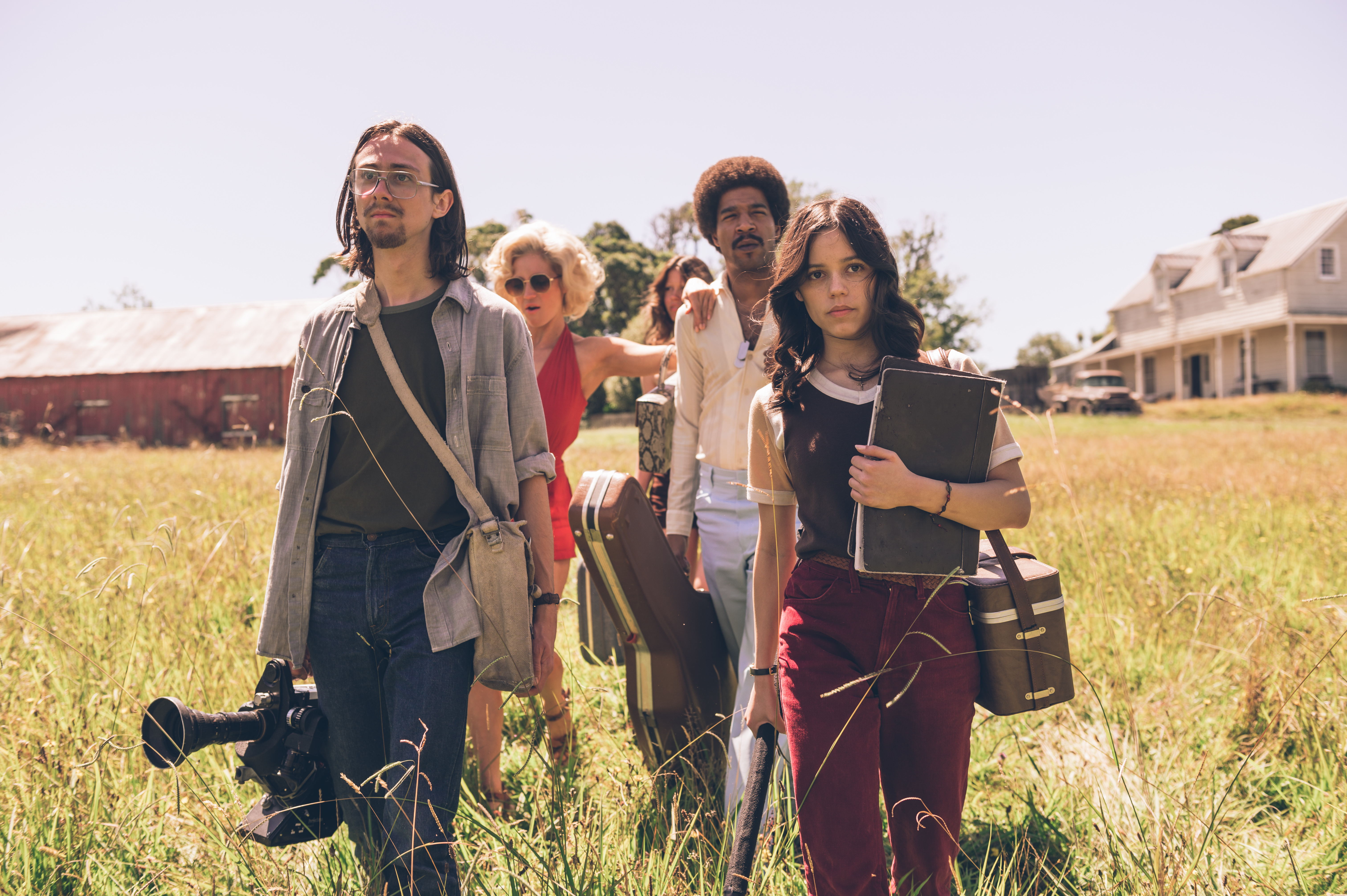 ‘X’ Review: Don’t You Usually Skip This Part of the Movie?

Movie Reviews on March 15, 2022 0Likes At The Movies
ShareTwitterFacebookInstagram

The basic premise of “X,” which should be applauded for being the easiest title to write out since “8 1/2,” is that a group of sex-loving hippies rent out a small house on a desolate Texas farmland to shoot an adult film. This isn’t any farmhouse, mind you, this is “Days of Heaven” meets “Little House on the Praire” with the interior of Stu Macher’s house. Also, this is not your ordinary 1970s porno, oh no, this one is an auteur film. Anyways, the elderly host couple woke up and chose violence on this sunny 1979 day because, well, they can’t have what these darn youngsters can: Sex.

Making up this filmmaking crew full of studs is the ringleader Wayne (Martin Henderson); I imagine the call sheet for this character read: “Matthew McConaughey-type.” Don’t get me wrong, Henderson’s performance is one of the funniest parts of the film; at one point, he asks Owen Campbell’s character to feel how hard his dick is. At another, he galavants through the farm in a very, very small pair of briefs. Wayne’s also a genius who foresaw the home media boom, citing the home viewing of porn experience as the reason for this. Little does he know, in 2022, my local Target carries half of the latest MCU movies and a couple of Studio Ghibli movies on Blu-Ray (and a few random DVD copies of “When Harry Met Sally” and “Clueless”).

Playing Wayne’s better half is Mia Goth as Maxine, the girl with the “X factor,” hence, the title. Maxine snorts more cocaine in this film than Elton John in “Rocketman,” and you feel for her in the moments she is groped by an elderly woman.

Jenna Ortega plays Lorraine, or “church mouse.” She begins as a prude but slowly develops a love for this art form — so much so that she wanted to be in it — for… reasons. The sudden change of heart isn’t really explained. Maybe it took Bobby Lynne (Brittany Snow) throwing her post-sex towel onto her or something. If not, I’ve got nothing. Ortega may be the best up-and-coming actress working, and at the very least, she’s the ultimate “Scream Queen.” You can’t take anything away from her performance in scenes of peril.

The best thing you can say about “X” is that it feels like an A24 horror film, at least in the first forty minutes. The opening few scenes have a lot of atmospheric shots of the countryside. Side wide shots of the group walking on the prairie with minimal dialogue. Yes, we do eventually get to the grindhouse-style killing that is promised, but “X” serves a seven-course meal ahead of its entrée. Once the pedal hits the floor, however, it does not let up.

The aging motif that the old couple is used to portray is an interesting one, to say the least. Aging feels like a topic that no one wants to discuss, you might as well add it to the list of topics to never bring up at the dinner table (politics, finances, religion), and at least it gave them some sort of reason to button-mash their way through this cast and crew. What “X” attempts to make you look in the mirror and say is “Wow, one day I will get old and won’t be fuckable.” One of the solutions to this problem was showing the elderly couples get it on (predictably) on the bed covering one of the kids. “Yeah, sex is cool, but have you ever slaughtered a group of youngsters?”

Even as strong as the concept of the motif is, there’s not a whole lot to supplement it. Yes, it’s very clear that the elderly couple, specifically the wife, have some interest and/or jealousy of the bodies and energy of these youngsters. But aside from the couple being more advanced in age and running the risks of heart attacks during intercourse, what really causes them to kill these people? The film would suggest that this may not be the first time this has occurred, making it the equivalent of the shadiest Vrbo listing you could find, but it would be fascinating to know a reason for these killings. There are rumblings of a prequel, and that might make “X” even stronger on rewatch.

Making or breaking any movie like “X” are the kills. It’s not that “X” features any special kills that’ll stay on your mind for more than the proceeding drive home, but the pure shock value of some of these kills will send people home happy. The most hilarious kill has to be in the aftermath of a death in the barn. The killer, who is up there in age, pokes the dead body a few times very slowly with a pitchfork. This moment, while seemingly overstaying its welcome at first glance, stays true to some sense of realism at this moment, and it should be applauded. The kill that kicks off the night is noteworthy not for it being a twist, you’ll know something is coming, but it’s a matter of when the kill will occur, not how/if.