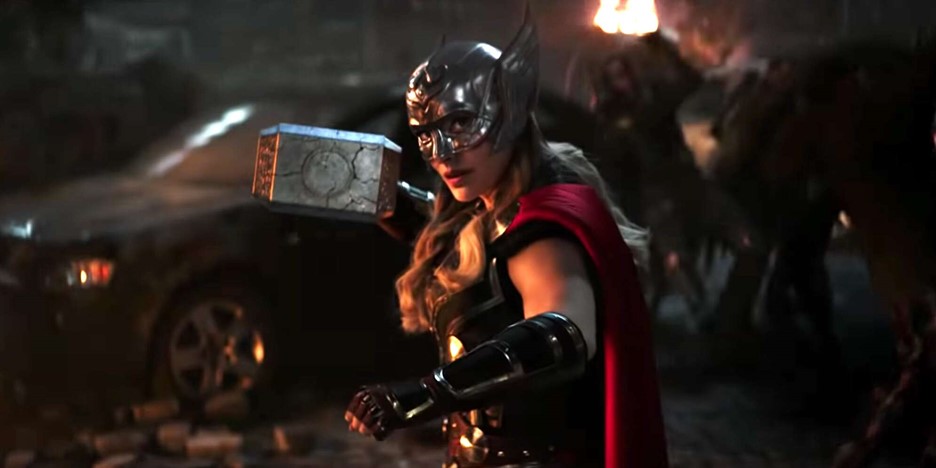 PREDICTING THE HIGHEST-GROSSING FILMS OF 2022

As the summer season continues to fall upon us, it may be tempting to forecast what kind of year we’ll have regarding blockbusters, IPs, sequels, etc. Disney and Warner Brothers already took the baton and gained some massive numbers this year with Doctor Strange in the Multiverse of Madness and The Batman, respectively. How about on other studios’ ends, though? As we march into the summer season, the most significant time of the year for families to get together for vacations and all cannot bypass the movie theater section. Family features, superheroes, dinosaur action, and the return of an awe-inspiring land once again will prove to be the money grabbers.

These features will most likely, if not downright impossible, not make the top-10 list this year, but some intriguing movies are more than dignitary to being mentioned.

Jordan Peele’s Nope may become the highest-grossing original feature of 2022 when it drops in theaters in mid-July. Having already cemented his stature with two masterpieces in the forms of Get Out and Us, Nope promises to dig deeper into the rising filmmaker’s bag of tricks with something mesmerizing once more. Peele’s first social thriller took $255 million on a $5 million budget, while his follow-up earned $255 million on a $20 million budget. Peele’s features were the year’s highest-earning original live-action earners domestically in both circumstances. Lightning may strike thrice as the devils this time appear to come in some form from the sky. Could his feature topple the opening weekend of an original live-action that’s currently held by James Cameron’s Avatar ($77 million)? It depends on how much anticipation has fostered once audiences lick their wounds after July cracks open with Thor 4.

It’s curious that David Leitch’s Bullet Train recently announced a delay to August 5th, but it could have a chance to break out if done correctly. Assuming good reviews are on hand and politics are cast aside, people might have fun with the blockbuster that can quietly own the August and September months as we head towards Halloween Ends and Black Adam in October. Keep in mind that a star-studded cast with Brad Pitt and Sandra Bullock may give Sony some more juice as it tries to keep its wheels grinding.

Meanwhile, The Battle of Lake Changjin 2 will fall down the totem pole once more blockbusters arrive, but it may hold out for one of the last few places in the top-10 list as the year concludes. And unfortunately, it appears that Halloween Ends will not make an impression given its predecessor’s filler content as we tumble towards the (supposed) finish line; maybe a strong execution will silence this writer’s thoughts. Shazam! Fury of the Gods and Puss in Boots: The Last Wish will get substantial returns on their investment, but they face a discouraging uphill battle when dueling James Cameron’s Pandora-filled sequel over Christmas.

Confirmed: Doctor Strange in the Multiverse of Madness and The Batman

It’s a no-brainer that the first two superhero features of 2022 would come out on top. Both have netted over $700 million worldwide, with Benedict Cumberbatch’s sequel seeking to reach around $900-950 million once it wraps up in theaters. Good reviews, great performances, and the current IPs of both superheroes manifests assurance that they’ll stick in the top-10 list once we wrap out the year.

The only question is, what do their futures have in store?

Thirty-six years ago, Tom Cruise and Val Kilmer took the flight to the skies in the memorable Top Gun. The sequel is poised to become a breakout after continually getting delayed due to the pandemic. Captain Maverick is called upon to train a group of Top Gun graduates for a special mission, and he’ll take to the skies once again. Cruise remains a top name in the industry thanks to his continued superb work on the Mission Impossible series and his status as one of the highest-paid celebrities. While we await Dead Reckoning Parts 1 & 2, we’ll keep the adrenaline going with his latest work that has garnered acclaim. Its (theoretical) total box office run should end between $275-380 million domestic and $650-850 million worldwide.

If there’s one thing that the last two entries have proven, folks love the interaction between humans and dinosaurs. This time around, the past stars of the Jurassic Park era reunite with the modern ones to create quite the spectacle as dinosaurs now live freely alongside humans. Chris Pratt and Bryce Dallas Howard will work with Jeff Goldblum, Laura Dern, and Sam Neill to trek dangerous waters against the fearsome creatures. Director Colin Trevorrow also returns after working on the first two Jurassic World features.

Remember that the Jurassic World series has made $1 billion each time, so it’s almost guaranteed that the third chapter (and overall conclusion of the two trilogies) will break the mark. Pratt has considered Dominion to be on the same playing field as Avengers: Endgame, so we’ll see if his comments hold water once the feature debuts. If it has similar drawing power as the first Jurassic World, which netted $1.671 billion worldwide, this could easily stand as one of the top three grossing features of 2022.

Only one side can attain dominion come June 10th.

The Toy Story series might be the best-animated saga in existence, but that won’t stop Pixar and Disney from trying to pull more content out from its roots. Chris Evans will voice Buzz Lightyear in a meta-story for the astronaut character as he tries to make it back home but discovers a sinister plan. Angus MacLane steps up in his directorial debut, promising a more cinematic, science-fiction look.

Toy Story 3 and 4 netted over one billion dollars each, so Lightyear has a distinct advantage. And it’ll be the first time in over two years that Pixar has not released a feature directly to stream on Disney+ (due to the pandemic). As a result, families and fans will band together to witness more of Pixar’s excellence in theaters once June 17th comes.

Minions: The Rise of Gru

With a Despicable Me 4 recently announced, there seem to be no signs of stopping the antihero Gru and his yellow minions. As silly and childish as it gets, the Illumination produced series has already earned almost $4 billion and is the highest-grossing animated series ever (recently passing Shrek). The last two entries both made over a billion dollars, so it’s safe to assume that the franchise’s fifth entry will be target said goal.

Sonic The Hedgehog 2 has been legging it out nicely, demonstrating that family fun is still prevalent in the world of chaotic superheroes and CGI-filled landscapes. Universal will get to take its moment to shine over the preceding summer months as Jurassic World 3 and Minions 2 will forge ahead.

The fourth journey with Thor and his friends may be the most colorful and wackiest yet. Taika Waititi returns to direct after helming the highly acclaimed Thor: Ragnarok in 2017. He reinvigorated our interest in the God of Thunder by creating a fun, vibrant atmosphere that became equally engaging and flamboyant in one single scoop. The traits carried over to Chris Hemsworth’s titular character and his arc in Avengers: Infinity War and Endgame, and he now finds himself back on another wild journey.

The first trailer earned 209 million views within 24 hours, the 7th highest in history.

Coupled with the return of Jane Foster as she dons Thor’s powers, the inclusion of the Guardians of the Galaxy (although we’re skeptical to believe this is more of an extended cameo), and the soon-to-be reveal of Christian Bale’s villain, this has all the makings to be an irresistibly tasty snack of a feature.

Ragnarok took in $854 million, so there’s a strong chance Love and Thunder can easily surpass that and vie for $1 billion (or more) come July.

Dwayne Johnson is a trustworthy movie star. Regardless of the film he’s in; he guarantees to draw eyes to his product. Many have dreamed that he’d take the role of the antihero to Shazam in the DC Extended Universe, and that will come to fruition in October. The details have been relatively scarce for a feature of this magnitude, but we’re promised to get some crazy action and a few of Johnson’s quips as he commands the screen. Heck, even if the feature doesn’t fulfill critics’ expectations, audiences will unquestionably come because 1) the superhero brand still holds good form, and 2) Johnson maintains unparalleled charisma and work ethic that piques folks’ attentiveness.

It pains to keep thinking that a sequel will come ever since Chadwick Boseman’s tragic passing in August 2020. Kevin Feige stated that Marvel would not recast his character and instead focus on the established characters from the solo story in 2018 and several new ones. Director Ryan Coogler returns to hopefully bring back the absorbing storytelling and characterization that gave the predecessor such distinction.

The first movie earned a whopping $1.348 billion worldwide, with much praise for its themes, cultural awareness, and empowerment of many black folks. If Coogler can maintain such a following, it would not be out of the realm if the sequel also came close to those earnings. It’s still saddening that the MCU will have to march forward without the spark of Mr. Boseman. He was initially poised to take the mantle of king of the MCU ever since Endgame marked the end of an era for the original Avengers.

And if we’re sticking to hypotheticals, this could take silver at the worldwide box office in 2022. Why not gold? Well…

Avatar: The Way of Water

No matter what other feature was on this list, this is most expected as the frontrunner for the most prominent feature of 2022. Thirteen years ago, James Cameron’s Avatar revolutionized 3D showings and visuals while becoming the highest-grossing film ever. Now, his first of several sequels land before Christmas and will quickly reignite public interest.

Dropping the first teaser during Doctor Strange 2’s opening weekend before debuting it online was a clever move on Disney’s part, as they can now reliably ease their way into marketing the blockbuster for the remainder of the calendar year. Cameron believes that the long wait will contribute to substantial success, like his time frames when releasing Terminator 2: Judgement Day and Aliens (two of the greatest sequels in film history).

Will it replicate its predecessor’s box-office total? Most likely not, but it can still muster the energy to go the distance like Spider-Man: No Way Home did with its $1.9 billion winter run (thanks to nostalgia and fan service). Avatar 2 has a lot working in its favor, and Disney will capitalize on that by December 16th.

The ultimate question remaining is whether Cameron has enough mileage to make this one count, and then the other three that will release throughout the decade.

JAWS – 45 Years of Terror at the Beach

TRIBUTE TO CHADWICK BOSEMAN: A TRUE KING OF THE DECADE