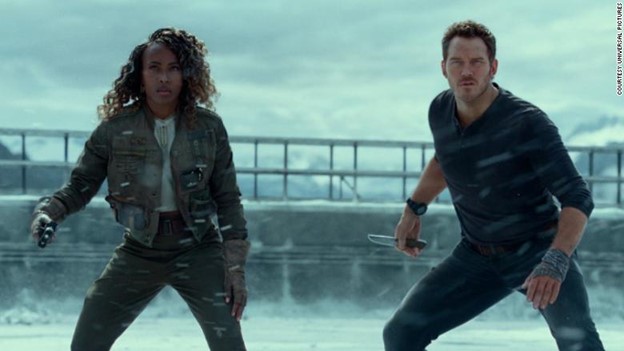 Even when sacked with poor reviews, life (and dinosaurs) still finds a way. Jurassic World Dominion tore competition with a “dino-mite” $143.37 million domestic debut, which is higher than Top Gun: Maverick’s $126 million launch and The Batman’s $134 million domestic opening. Even with a COVID curve, nostalgia, stiff early summer competition, and “less curious folks than they were four years prior,” it opened on par with its predecessor, Jurassic World: Fallen Kingdom.

It is Universal’s biggest opening since Fallen Kingdom and the fourth largest debut weekend (behind its predecessors and Furious 7). The legacy sequel to Jurassic Park combined the current cast of Chris Pratt, Bryce Dallas Howard, and Isabella Sermon with the old crew of Sam Neill, Laura Dern, and Jeff Goldblum. More dinosaur action and thrills could not cover a lackadaisical plot or a satisfying conclusion to the nearly thirty-year-old franchise. But hey, all the follow-ups from Jurassic Park have received mixed to sour reviews, and audiences still show up. A win is a win.

With $246 million from overseas, Dominion already holds firm with a $390 million opening (once the actuals come on Monday afternoon, it’ll probably be closer to $400 million). It earned $52.5 million in China, which isn’t anything to write about since its predecessors made twice as much in their openings. Remember that several features have not played in China since last year, so this is another bonus for Jurassic Park 6. If it legs out correctly and without much fuss, we could be looking at a final cume between $950 million and $1.25 billion. I stand by the fact it’s guaranteed to already sit in the top-10 by the end of 2022, and it can only do so much more.

Then again, its only actual summer competition from here on out is the leftover legs of Top Gun: Maverick and the incoming debuts of Lightyear, Thor 4, and Minions: The Rise of Gru (which means Elvis, Nope, and Bullet Train are relatively speaking).

Speaking of Maverick, the Tom-Cruise motions picture earned $50 million in its third weekend, a 44% drop or a $393 million 17-day total. By the end of this week, it should pass $400 million domestic (and Doctor Strange 2’s domestic run). With a $750 million total now, there could be a chance Tom Cruise attains a billion-dollar picture on his hands, assuming South Korea pulls big numbers. With an impressive buzz and nostalgia, plus spectacular reviews, this is playing along the lines of The Passion of the Christ and American Sniper regarding its low weekend drops and potent legs. Mission Impossible 7 cannot come soon enough.

Doctor Strange 2 has earned $398 million domestic and $930 million worldwide. That is the second-highest Hollywood release of the pandemic era behind Spider-Man: No Way Home. It drops on Disney+ next Wednesday, so it still has some more time to get as close to $950 million before Dominion (and possibly Maverick) takes its #1 spot. Curiously, it could be a battle of who gets as close to/crosses one billion this summer first, but we’re still in the early weeks of summer to predict. The Benedict Cumberbatch/Elizabeth Olsen sequel jumped 37% from its predecessor without a penny from China, which affirms Marvel Studios’ global popularity. (Wackily enough, Sony is pulling an Endgame re-release to see if they can reach $2 billion in September for No Way Home.)

The Bob’s Burger Movie took fourth place with $2.34 million in its third weekend, and The Bad Guys passed $90 million domestically this weekend with a $2.25 million earned.

Lastly, Sonic The Hedgehog 2 will crawl towards $400 million worldwide to (possibly) beat out Fantastic Beasts 3 and Uncharted. The Lost City earned $185 million on a $70 million budget, giving another win for Sandra Bullock and Channing Tatum. And Everything Everywhere All At Once has made $86 million worldwide, passing Hereditary as A24’s highest global earner.

Next up, Lightyear debuts on Friday projected to pull in $100-120 million in its debut.