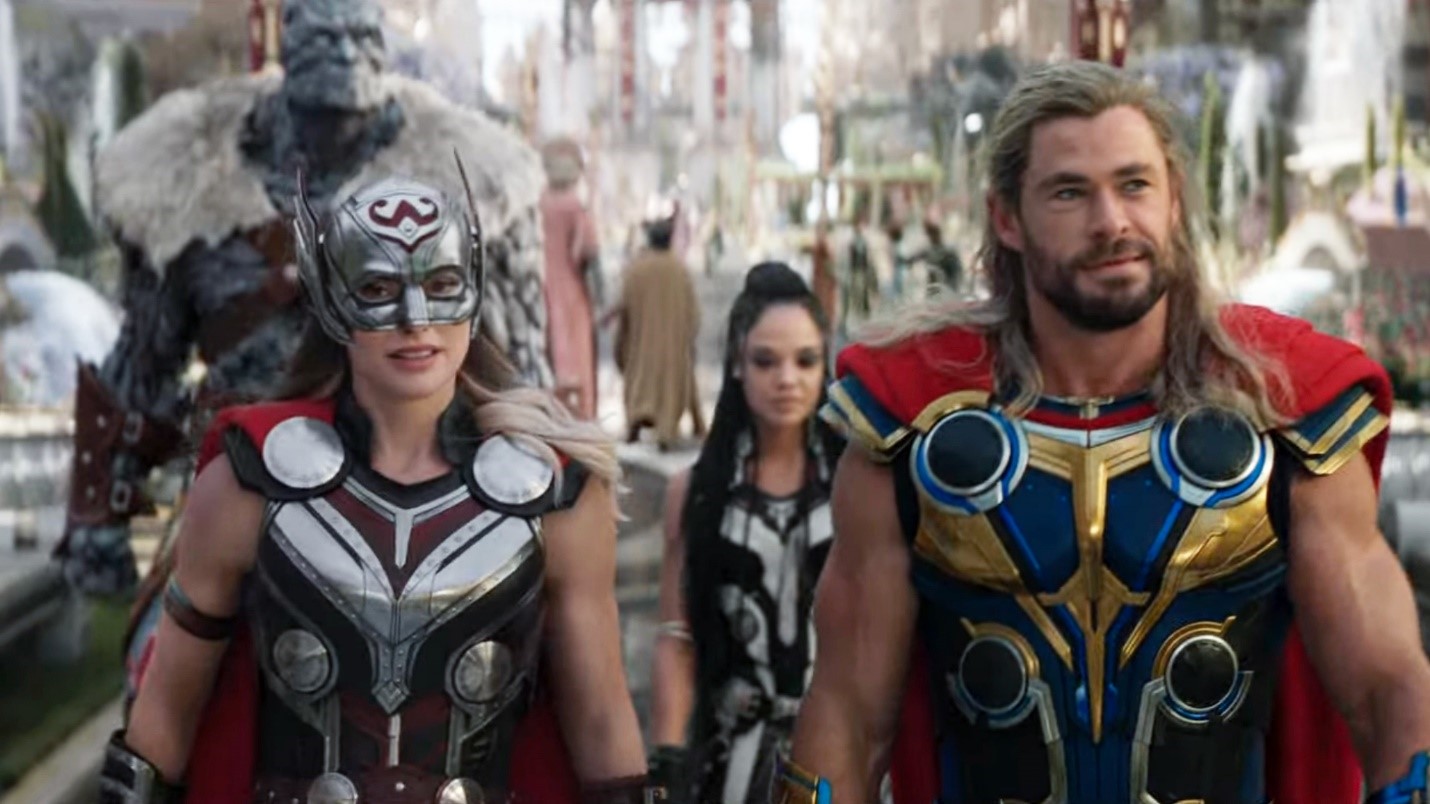 New Asgard, we have a situation.

Disney might be one of the largest companies in the world, but we did not expect them to throw out another safe sequel to reclaim their once dominance at the box office. Instead, the latest Marvel Cinematic Universe feature seems to become a metaphor for their aimless direction in Phase Four. You know, the protagonist has “lost their mojo and needs a new direction.” When looking at what’s come this far (including the fun shows on Disney+), it’s indubitably vexatious not to have a clear endgame (pun intended) in mind.

Black Widow came too little and too late, while Shang-Chi and Eternals attempted to spark new foundations. Spider-Man: No Way Home was a nostalgic romp to please executives and diehard Spidey fans, and Doctor Strange in the Multiverse of Madness seemed to stamp Benedict Cumberbatch as the face of Marvel for the near future.

Thor: Love and Thunder, boiled down to its bare spirit, is simply another comic book movie to appease fans that loved Thor: Ragnarok and its reawakening of how to utilize the God of Thunder. Much like X-Men: The Last Stand, though, it crams two comic arcs into a pretty short feature (119 minutes) to fun but oddly pedestrian results. It’s a shame since this follow-up is far from the wondrous formula that returning director Taika Waititi utilized in Ragnarok to include some great social commentary and ingenious comedy flavors.

Love and Thunder picks up some time after Avengers: Endgame, where Thor (Chris Hemsworth) has joined the Guardians of the Galaxy to partake in random quests. Narrated by Waititi’s rock-CGI Korg character, Thor struggles to find inner peace despite all he’s lost over the years, including dealing with the breakup of his ex-girlfriend, Jane Foster (Natalie Portman). However, the Guardians are out of the picture rapidly (and onto their third feature, ha-ha) as Thor gets a distress signal from warrior Sif (Jaimie Alexander) that a “God Butcher” named Gorr (Christian Bale) is out for magical blood after the death of his daughter. So, our protagonist and his rock buddy return to New Asgard, led by Valkyrie (Tessa Thompson), and band together to stop Gorr and rescue the children he kidnapped.

Oh, and Foster’s character has Stage 4 cancer and deciding that science cannot save her, she heads to New Asgard to (somehow) reconstitute Thor’s beloved hammer, Mjolnir. Yeah, Thor and his ax, Stormbreaker, are getting jealous over Foster’s mantle as “The Mighty Thor.” The problem is that her time clicks to an end, and the magical powers can only do so much.

This story is too tight to allow the subplots to develop. The chemistry between Hemsworth and Portman feels rushed and slightly subpar to fully resonate, and the characterization of Thor becomes frustratingly doltish. Instead of aspiring to rise and stand as something more, he falls back to love-torn cliches and juvenile actions that disrupt the competence his superhero character once had. It feels very mock-up like the Asgardian plays we witness in Thor 3 (oh, you do see it here again, to a diluted effect). So get that paycheck, Matt Damon.

At least Waititi once again succeeds in allowing Hemsworth to continue to have fun in his role, so that is still positive. Portman gets to shine here with her muscles and kick-ass, while Waititi’s CGI-ed Korg remains a treat. Thompson becomes criminally underused here, as her words and moments onscreen shine brighter than some of the visuals at times. And Russell Crowe’s portly, vainglorious take on Zeus is quite silly (almost convinced we were watching Xanadu for a moment).

The main talking point is Christian Bale’s take on the villainous Gorr. Bale’s take on a father that lost his daughter, who starved to death in his arms while praying to uncaring gods, is brilliant and evocative (that opening scene triggers Star Trek V memories). It speaks to the similar theme of marginalization as Michael Keaton’s Vulture in Spider-Man: Homecoming, but with a much more unsettling vibrance due to the stark, dark colors of the character. Bale infuses the villain persona with a Nosferatu/Lord Voldemort milieu and even has solid depth to claim gods are false and supercilious. Abstaining from the zany, vibrant colors of the other film characters make him the genuine highlight and a great return to Marvel excellence for producing another memorable baddie since Michael B. Jordan’s Killmonger and Josh Brolin’s Thanos. Now, if he had gotten a little more screentime, he could’ve taken the top spot comfortably.

Waititi banks heavily on the vintage hard rock 80s music with Guns N’ Roses, ABBA, and Enya, but Led Zeppelin was much more impactful in the predecessor. And the visuals are great at times, but the overindulgence might be counterproductive to immersion in viewers’ experience. Again, these are some minor nitpicks when the prevalent issue is the narrative (much like it was in the recent Doctor Strange 2).

As it stands, Thor: Love and Thunder tries to juggle the “love” and “thunder” aspects, but it ends up getting a hit and then strikes (and repeat) rather than hitting the ball and reaching that home run. The gags and jokes this time might’ve become overkill. And it reminds us we’ve come a long way since the semi-Shakespearean approach in the debut 2011 motions picture that it might serve best to watch this fourquel when it strikes Disney+.

Fortunately, the cast, particularly Bale, and action will do their best to immerse you that it’s (almost) worth the price of admission at the multiplex.