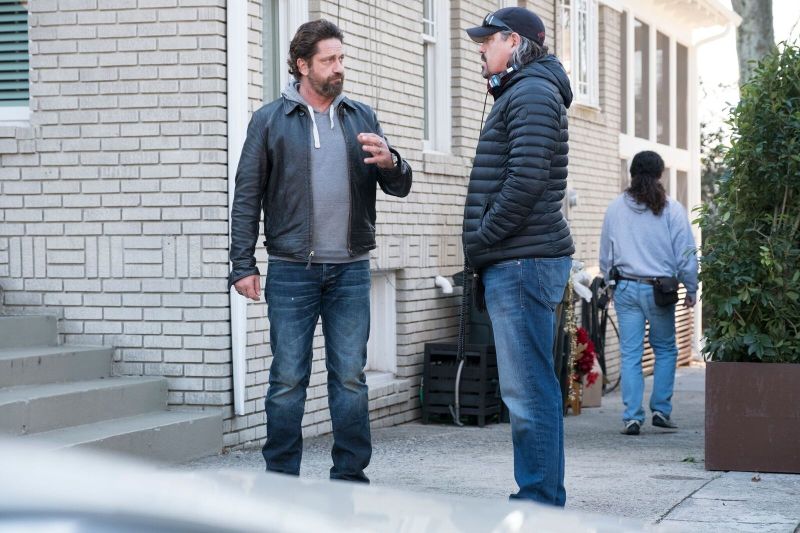 Reel 2 Real on January 29, 2018 0Likes At The Movies
ShareTwitterFacebookInstagram

Director and Writer of “Den of Thieves” Christian Gudegast talks with ATM about the reality of being a director and writer. “Den of Thieves” is a newly released film that stars Gerard Butler, Pablo Schreiber, O’Shea Jackson Jr., and 50 Cent; Curtis Jackson. The film is a gritty crime sage that follows a superior unit of LA County Sheriff Department and Los Angeles’ most notorious and successful bank robbery crew. “Den of Thieves” is circled around this notorious bank robbery crew’s mission to plan a heist on the Federal Reserve Bank. Gudegast discusses with ATM the brainstorming and rough cuts dealing with the making of the film.

ATM: Take it back to the beginning of the making of Den of Thieves.

Christian Gudegast: I first started writing the script in 2004. Most of the characters are based on people I already knew. I wanted to make a film based in Los Angeles, a crime saga revolving around these criminals and police that I knew. I saw a photograph in the Los Angeles Times of a Federal Reserve Bank money tub that had 30 million dollars of cash. This image fascinated me. I started researching this Federal Reserve Bank. I decided to write this story about the intersecting lives of cops and criminals around a heist of the Federal Reserve Bank.

We went into pre-production in September of 2016 in Atlanta. The movie is set in Los Angeles, the big challenge was finding locations to somehow make a movie that is about LA in Atlanta. The weather is 200 miles inland from the coast. It is 1200 feet, basically a city in the forest. That was very difficult. After driving through the city for six months we were able to find all the few locations that did look similar to Los Angeles. I think we pulled it off. We shot the movie in Atlanta from February through May and in the end, we shot for a week in Los Angeles.

ATM: Before production, what were your prefigured thoughts from the beginning? How did you think the movie was going to end up? Did it change along the way?

Christian Gudegast: Yes and no. The look and style of the film were established long before production. I am a photographer, so I went out to photograph the entire script in still photographs. I went to the actual locations with the actual characters the movie is based on. I photographed them in their environment with the same lens we shot the film with. The same look and the same angles. So, the look, feel, music, and soundscape was all sort of pre-planned. What changed was the realities of production. You must think on your feet because you are not able to do certain things for many reasons. So, we had to adjust along the way here and there. That obviously did change the way we shot scenes. Some scenes we could not shoot, or we had to alter how we were shooting certain sequences.

For example, the Federal Reserve Bank sequence, we are first introduced to it by Merrimen when he is talking about it.  We cut certain

ATM: What inspired you to write “Den of Thieves?”

Christian Gudegast: What really inspired me were the people that I knew and their personal stories about their lives in the role of cops and robbers. I wanted to set a film in Los Angeles that was real and based on the stories of these real people that I knew.

ATM: When you sat down and saw the finished product of this film. In what ways did you self-critique yourself?

Christian Gudegast: In an endless number of ways. I’ll say it is about 80 percent of the initial vision. The challenge as a filmmaker is to bridge the gap between the initial vision and the final product. There are so many challenges in production and post-production with budget and locations. It’s just the realities of production and schedules of actors. You must make changes along the way. That is just the reality of the film business. I am my own harshest critic but knowing the challenges of making this film we are all very happy with the outcome.

ATM: There have been many heist thriller movies. In this film, were you trying to re-invent or create a new way for us to perceive these types of films?

Christian Gudegast: Create a new way. We wanted it to be original to ourselves. We did tons and tons of research about the Federal Reserve. We worked with armies and consulting tech advisors to figure out the most possible to pull this out.

ATM: Do you think you reached the goal of showing us a new way?

Christian Gudegast: I do.

ATM: Describe the preparation for the Alameda Corridor scene.

Christian Gudegast: We prepped that months in advance. WE trained all the actors in a facility and on land about 40 minutes outside of Atlanta. They trained there ass off for months. Merrimen and all the criminals were training on one side. The cops were training on the other side. We kept the two crews separate. During training, we had them do that action over and over again. When we got to go to the location in the middle of a city, we took over three city blocks and we blocked all off. We put in 250 cars. By the time we got to the set, all the actors did all the stunts because they knew what we were doing.

ATM: Why did you feel 50 Cent; Curtis Jackson was the right one to play Enson?

Christian Gudegast: Enson, the character as written on the page was very tough and very intimidated. He was the muscle and strength around Merrimen. When I met Curtis, he was exactly that person from the streets. He is a big tough dude who is absolutely totally real. He had a certain presence and energy to him that was like the character written on the page.

ATM: Not for just 50 Cent, how do you know for sure O’Shea Jackson Jr., Pablo Schreiber, Gerard Butler were the right fit to play the main characters?

Christian Gudegast: We spent a long time casting for the film and we went through ever actor and character very carefully. When I met Gerard, he was the first to become attached to the film. We went to dinner several times to talk about the movie and the character. As we sat there to talk about the character, he would start to behave in certain ways that I envisioned him to.

Oshea’s character Donnie  on the script was a difficult role to play. He had to be streets, tough, very intelligence, but at the same time he had to have an incident quality to him. He has all of these things. Oshea is funny, younger, and very very bright and cool. He is from LA and the streets. His dad is from NWA. He has that street cool kind of vibe to him. He checked all the boxes.

Pablo, who plays Merrimen is hyper intelligent and very intimidating. Pablo was all of these things. He was a D1 athlete and played basketball in college. He is very fit and strong. He has a piercing stare. He has great authority, which is exactly Merrimen’s character. That was the second I knew he was the guy.

ATM: Many people might not understand exactly what a director goes through. Take us through a full week of what you did as the director “Den of Thieves?”

Christian Gudegast: A week of being a director for pre-production is the following:  you’re up every day at about anywhere between the hours of 5am and 6:30am in the morning. Then you get to the production office. The production office is broken down into departments. You have the props, arts, stunts, hair, and makeup departments. We would have meetings with all the heads of departments to have updates to discuss the status of locations. We went over location scouts, finding where we were going to shoot the film. Once we found the location we would talk to the art departments about their sets. Sometimes we would have to built the sets and figure how to dress the location. We would paint and add props. We would cast every day. The casting roles deals with the speaker roles all the way down to the extras. For example, in the Rivera Bank scene, there were several extras there and there were people like bank tellers, customers, and security guard. All these roles the director selects. People come in to meet with you and it takes a long time for every role. You are sitting in with 10 to 20 to 200 people. You slowly meet all of them and choose the people that are going to be in the film.

When you get into production, depending if you are shooting at night or day, usually we are shooting during the day. You are up at

about 5am and you are on set at about 6:30am-7am. You quickly grab a bite to eat on the set. I always walk the set to check it for the art department. I check how the set looks and to see if it is dressed properly. If it is all correct and if all the details are there. Then I talk to the DP and view the shoots for the day for this set. Then, I go to the actors who are at hair and makeup currently. We talk about the scenes we are about to shoot. When they are ready, they come onto the set at 8:30am. Then we start blocking the set and walk and talking in the scenes. The crew is watching us do this. While we are rehearsing the camera team makes marks on the ground. They mark where the actors are and will be as they go through the dialogue and scene. That is for the camera teams focus polar.

During post production, I would get up later at 9am to 9:30am. I would get to the office at about 11:30am. We would review everything we shot with my team of editors. We review all the different shots, angles, and performances. Then we start selecting our favorite shots and performances, and line readings from certain characters. We start to assemble the scenes. Then we go to about 7pm or 8pm at night. When I get home at night I take with me a lot of the footage and I am constantly reviewing everything. The coverage of the scenes and the actor’s performances. I make selections of what I like. I send my notes to the editors in the morning. It goes like this for about six months. When we are done with picture editing, we move to sound. We bring in the sound music and sound effects. If any dialogue from the production sound is unclear, then mix together all the dialogue, sound effects, background sound, and the music. Then we do the DI, which is when you color the film.  Finally, you do a final pass of the photography of the movie.