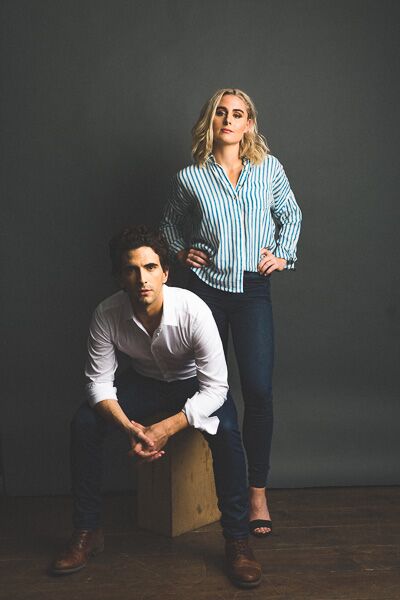 Matt Angel and Suzanne Coote On The Open House

Reel 2 Real on February 2, 2018 0Likes At The Movies
ShareTwitterFacebookInstagram

Matt Angel and Suzanne Coote are the Directors, Writers, and Actors for the newly released Netflix film “The Open House”. The film stars “13 Reasons Why” star Dylan Minnette. Dylan plays a young male named Logan who tries to handle grief after losing a close family member. While trying to close with his lose, he experiences episodes of paranoia, anxiety, and other issues. His mother tries to help him in this hard time as she too has lost someone. Both characters work together in efforts to strengthen their bond

ATM: What was your reason for writing and directing this film?

Matt: Suzanne and I have always wanted to be filmmakers. A few years back I had started writing screenplays. I decided rather than send the screenplays off to people that I wanted to wake up to myself every day. I have learned from years of acting you cannot wake up to choose to go on set. Whereas, in writing you can wake up and choose to work. I had this idea that until I get this break, that I want to be making content. When I met Suzanne, she was the same way. We decided to do this together. We had it out to a lot of investors but figured out that was not the best route.

ATM: How long did it take for the filming process of The Open House?

Matthew and Suzanne: We prepped for three weeks. We divided the shooting schedule in two parts. Everything was a total of four months.

ATM: What personality traits did you imagine the main characters to possess?

Suzanne: The characters are going through loss and grief in the entire movie. This is a big theme we wanted to carry throughout the movie. One thing we talked about before writing it was that people deal with grief differently. For Logan, we felt a lot of the grief came out in paranoia and anxiety. Also, blaming his mother for issues. For Naomi, we really wanted to portray a sense of denial, but also loneliness.

Matt: Yes, loneliness is a good one. I think loneliness in an awkward mind can be projected as selfishness if it is not handled correctly. We wanted to see that side of a human dealing with grief where it does not look all pretty.

Suzanne: Especially when you have a son. She lost a husband and he lost a father. We wanted to show how they both supported each other with grief.

ATM: Describe how both of you brainstormed and wrote the screenplay for this film?

Matt: We were both working full time. We would go to our day jobs. We would come home at night to watch all scary movies: thrillers, horrors, and psychology thrillers. We were trying to figure out the type of movie we wanted to make. I had a concept that already creeps me out about open houses. We both decided we wanted to ground it. We would go to our jobs full time, come home watch movies, drink wine, and work through things. It was a magical process. To come home and do what you love to do.

ATM: How come the killer{s} face was never really revealed? Was it the handyman?

Matt: We want the audience to really see how two people experience grief through their point of view. Everyone is kind of a suspect in your life and everyone wants to be close with you, but you don’t want to be close. There is a lot of that paranoia. Logan’s paranoia comes from that grief. We wanted to leave it to the audience for suspense.

Suzanne: In filmmaking, a person should walk out of the theater or living room feeling angry, sad, happy, scared, frustrated, and hopefully talk about it. We purposely did not want to tell anyone who the killer was, but we wanted people to make up who the killer was for themselves. We have gotten some amazing fans writing to us about their own ideas and plots about who the killer could have been.

Matt: To answer your question more about why we did not expose the killer is because we wanted to make a film about death, which something that was very fascinating to us. We have both experienced loss in our lives. This man could be a killer that goes from open house to open house killing people. He is also represented as death.

ATM: Why did you decide to kill the dad off? How do you think it would have been if the mother died off instead?

Suzanne: The dad dying shows how death moves into the lives of the characters. This is the reason their lives had changed. For us this had to happen. I have never thought about that. Really good question about if the mother would have died.

Matt: I think there are a lot of tests on psychological relationship between mother and son. Also, between father and daughter. Originally, this was a mother and daughter story. As we talked more about the psychological angle of the story, we wanted to break the bond of the father and son. If it does not exist anymore, then it is destroyed. Putting a mother and a son together who love each in a hard situation but making it even harder because the son does not have a father to go to. The mother does not have her husband to go to. You kind of turn these two people against each other.

ATM: What scenes do you feel you did the best in as the directors and writers in the film?

Suzanne: That’s a very hard question. Our cinematographer brought our vision to life. I think we accomplished it.

Matt: There was one day when we did not have our crew with us because everyone had the day off. We had to get a hand full of people to help on set. We had about five people for the scene where the guy gets into bed with the mother. We were not only directing, but we were doing a lot.

Matt: We really love films that connect the audience. A lot of it came from the research we did and the films we watched.

This film challenges the relationship norms between mother and son, which is not common in horror films. Also, this film allows people to reimage how a mother lives without her husband and how a son continues to grow as a male without with a father. The end of “The Open House” will leave you confused about the killer, but in the mist of this confusion an individual should walk away from the film sad, relieved, and scared.

A Talk With David Rosier