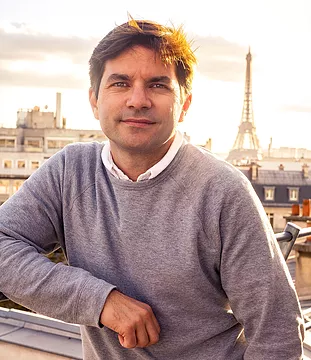 Reel 2 Real on August 13, 2018 0Likes At The Movies
ShareTwitterFacebookInstagram

Mission Impossible: Fallout is the latest addition to the franchise. Tom Cruise does a superb job jumping through the air, completing missions, and fighting villains. Raphael Benoliel mentions the special and unique sequences in this film compared to others while he oversaw them as the movie was being filmed in France.

ATM: Tell us more in-depth about your role as the line producer for Mission Impossible: Fallout.

RB: All the France scenes, crew, and shoots for this film went through my company. These responsibilities went beyond working as a line producer. It is different than going to the same shoots. I employed all the technicians that worked on this film. I had to make sure everything went fine. We had to deal with the different sequences and administrations.

ATM: Why has your life gravitated you to producing films as a career today?

RB: It has been a long time. My grandfather used to have movies together while I took days off from school. I spent time watching movies. I became attracted to films in this way. My entire family is associated with art. My mother is a designer. My stepfather was an architect. My cousin is a designer. My uncle is a jewelry maker. I wanted to work in a different art industry. I loved the logistic, organization and building relationships with the crew. Producing grouped everything I had liked together. This is why naturally producing is my career.  I do not have any person in my family working in the film industry.

ATM: Express your best memory while working as the producer for this movie.

RB: The difference between this film and others I have worked on is that everything was bigger. The challenges of this movie were higher. I’m just going to say it, I did not like that it was so big. It needed to be so big. The one interesting thing about this industry is to talk to everyone and meet new people. You talk to all the technicians. Some of these people are my friends. I spend more time with them than my own family. When you employ over 500 people you do not have time to talk to everyone. I did not like this aspect. However, I had a chance to work with Tom Cruise, who is one of the best professionals in the industry. It was great working with him. Cruise is such a professional. I love seeing him work. You can learn a lot from just seeing him work. We have done things in Paris with this film that has never been done. I had a chance to fly over Paris in a helicopter, which is not usually done. It was not that easy. We had a lot of ups and downs. This film was one of my best memories.

ATM: Why did the production team make the strategic decision to film in Paris besides the scenery?

RB: You look at all the locations in the other franchises and wonder what to do differently. Paris became the case for this film. We had a lot of attacks in Paris a few years ago. The political decisions from the directors were to go shoot in the Paris to show the world we can do it. We will not stand in fear of terrorist but only face it. Now, we can say, “Fuck you. We are here, and we are doing it. We have done something different.” This is on top of the fact Paris being a beautiful city, Mission not ever filming in Paris, and the sequences that have never been filmed. It was a political decision from the directors, crew, and Tom Cruise to want to shoot in Paris for this reason.

ATM: Compare Hollywood to Paris’ film industry. Your view on what Paris lacks in their industry compared to the United States.

RB: We spend money differently to do films. Our films are related to French speaking countries. We have great technicians and can achieve things in the States that are different. The ambition to create great films is different because of the market. The artist’s aspect is important in the States and it is called an industry. Whereas, in Paris’ the word “industry” is not used. We use the word “art” as far as movies. We put it in the category of paintings and sculptures. It is an art form for us. It has always been this way in our culture. This is the difference. The way a French film production crew shoots and responses to the material is different. It is an art form and not an industry. This is the difference. We are not making big blockbusters like in the States. The special effects and stance are the same. We are not able to produce the amount of film like in the States. We have fewer technicians in some of the areas, which limits our ambitions. We have the skill.

Benoliel does not disappoint when it comes to working as a producer. Paris considers film as an art form and puts more expectations into it. Cruise puts on another great performance and continues to shine a light on the franchise. Mission: Impossible-Fallout is currently available in theaters nationwide.