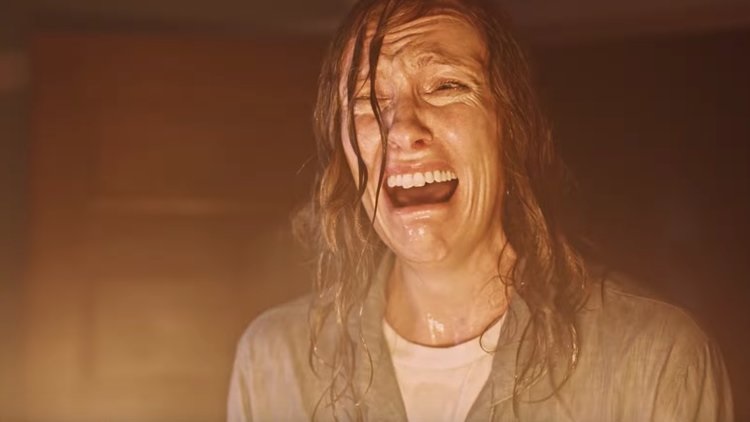 Movie Reviews on July 18, 2018 0Likes At The Movies
ShareTwitterFacebookInstagram

The 2000’s have seen impressive additions to horror cinema, including “The Ring,” the “Saw” franchise, “Orphan” and “Get Out,” and now joining those ranks is Ari Aster’s debut feature film “Hereditary” starring Toni Colette.

The film surrounds a family in the aftermath of their grandmother’s death. Colette plays a miniature artist named Annie struggling to come to terms with the loss of her mother and trying to remain stable for her two kids, Charlie and Peter. Annie feels the weight of guilt for her estranged mother’s death, feeling as if there was something she could’ve done to prevent it. The two of them had a difficult relationship, partly due to her mother’s dissociative identity disorder (DID).

As the story progresses, the audience learns of the family’s tragic history of mental illness and how it’s led many members of the family to madness and even death. Despite already being burdened by grief, Annie’s daughter Charlie dies after her head during a frantic drive home whilst going into anaphylactic shock. Similar to 1960’s “Psycho,” one of the central characters from the movie poster surprisingly dies within the first act of the film.

Hurting and looking for company, Annie befriends a woman named Joan from a support group for grieving family members who teaches her how to successfully perform a séance for her diseased daughter. Annie’s relationship with her son Peter has been tense since a sleepwalking accident years prior almost saw Annie murder him in his sleep with paint thinner and a match. Annie convinces her family to perform a séance for Charlie, which only causes further damage to the family.

From there, the plot takes a shadowy descent into terror. Reading as one long running anxiety attack, the film never loosens its grip on the audience’s fear. None of the film’s two-hour runtime seems wasted, as every minute is marked with tension and a foreboding feeling that something is creeping around the corner.

Toni Colette hasn’t shown such extreme commitment to a role since 2009’s Golden Globe and Emmy winning series “Untied States of Tara” in which she played a mother crippled by DID. The agonizingly intense emotional agony Colette faces in “Hereditary” not only makes for superior supernatural cinema, but also fictionalizes the unrelenting wrath of mental illness on the family dynamic.

While “Hereditary” is an amazing horror film for the textbooks, it also stands as a statement on how mental illness detrimentally affects family life. Annie’s disbelieving husband is no support to her and only believes she’s fabricating her issues, orchestrating a conspiracy of peculiar events surrounding the family. Annie is painted as the crazy wife and the problems she faces are belittled as all in her mind, a common reality for those suffering with any sort of mental health issues.

Disguised as a supernatural, occult horror film, “Hereditary” speaks a lot about how mental illness can set a family on fire from the inside out. And what does that mean exactly? You’ll have to wait and see.

‘THE 355’ Review: Chastain, Cruz, Kruger, Nyong’o, and Bingbing Assemble for The Team of Misfit Agents

‘SING 2’ Review: Bono is ‘The Best Thing’ About His Voice Acting Debut