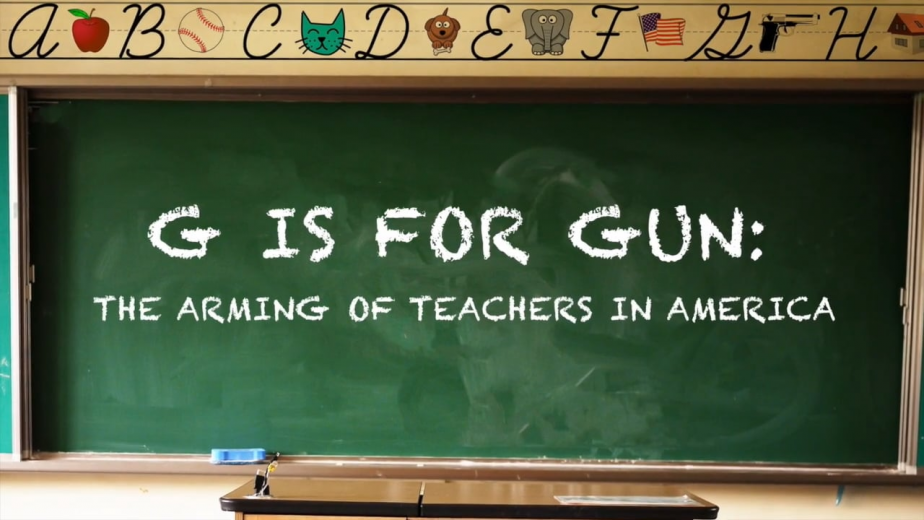 World Channel’s ‘G is for Gun’: Its Message On Taking A Stand at School

Reel 2 Real on October 4, 2018 0Likes At The Movies
ShareTwitterFacebookInstagram

Seems as if there is a mass school shooting every few months. These mass shootings have allowed new policies to be set in schools for the student’s safety. Julie Akeret explores this issue in her co-directed documentary G is for Gun.

ATM: How did this film allow you to transform into a better director?

JA: This is a good one. While working for the last three years on G is for Gun, I think I became a better listener, which I think translates into being a better director. I went into this film thinking that we would make a piece about both sides of the debate, but my own personal perspective deep down was that it was a bad idea. In general, I don’t like the idea of fighting fire with fire and when we made our first trip to Ohio, I thought it was going to be a bit like the Wild West, the kind of place where gun culture rules and moms go to the supermarket packing heat. But that’s not what I found. I didn’t see one public display of a gun, and important people we talked to who voted for the safety measure shared a regret that things had gone in this direction. The bottom line for many school officials is that, if they are worried about increasing security but are dealing with a decreasing budget, they feel that guns are their only option.

I think film-making is about having an exchange with a community. And listening carefully to what is being said is the filmmaker’s difficult job. A lot of my films in the past highlighted a personal or communal struggle despite difficult circumstances. Since the election, and what I perceive to be a growing divide in our world, I’m more interested in exploring the grey area where there may just be the possibility of finding some common ground.

ATM: Why do you feel schools went from allowing their teachers to hit students to now allowing them to wear a gun for safety? How did we make this transition?

JA: This is a response to what has happened in education. There are some really big issues involving school structure, policy, and standardized testing. These issues have created a certain tension inside schools and lack of attention to students who are on the verge of trouble. These predominantly white male students who have shot up schools are suicidally depressed. They have records dating back to their early stages of disruption. The schools are bigger now, and have less mental health services. These kids shoot to prove themselves. They have been horribly bullied themselves. They do not care if they get killed. They want to go out in a blaze of glory. They have been treated like losers their whole life. They would rather get negative attention than none at all.

This is a toxic environment for students. I also have a big problem with standardized testing in schools. I think a lot of it is done to figure out who has been left behind academically. But teachers do not have time to get to know the kids when they spend endless hours in standardized test preparation and then evaluating the results. This needs to go. The money that goes into this testing should go into mental health. The ratio between school counselors to students is like 1 to 500 in our country. It is inconceivable to think schools are supposed to function with this lack of mental health care. I am so glad I am not in school anymore. Sandy Hook started this whole move to arm teachers. There is less money going into the school budgets than ever. This causes schools to respond in any way they can.

pick up guns they plan to shoot it. No one picks up guns for fun. Could they pick up something less violent and harmful?

JA: We did an interview with a guy who trains law enforcement all around the country. His name is Lieutenant David Grossman. He trains law enforcement in all types of shootings. He wrote a book tiltedKilling, which was nominated for a Pulitzer’s Prize. Grossman was a psychology professor at West Point for a number of years. This interview was interesting. We asked him what he thought about all of the school shootings. He said that it had to do with the proliferation of video games. There are a number of popular video games that are extremely violent. Games where players receive points for killing and rape. The more violence you commit, the more points you get. This, combined with suicidal depression and sleep deprivation are, according to Grossman, the ingredients leading up to a potential shooter. Their wiring is off to begin with and they get positive reinforcement for violent behavior. These kids are also not doing well in school or socially.

ATM: What happens to the teachers who want to take it upon themselves to use the guns in a negative way against the students?

JA: That hasn’t happened yet and let’s hope it never does.

The goal of this film was to present both sides of the guns in schools debate. It would have been much easier to make a film on one side. We wanted to show both sides because we need to have a conversation about this. To make a film that said yes or no to guns in schools would have been a mistake. Industry peers at screenings still perceived it as pro-gun-piece. One friend asked to see my NRA card. There was a real concern in her voice. Another person said we have gone too far with being fair. I was taking notes at the screening. Should armed teachers appear less heroic? Should we see more footage of the teachers looking confused at the gun range? This is not what we saw. One of the distributors compared our film to something that Trump said about Charlottesville. Trump said: “there are good people on both sides…” So basically, from the superintendent of schools to the teachers who had volunteered to be armed responders in schools were being compared to neo Nazi’s.

In general, I don’t think we should have guns inside our schools. But I am not totally against a school deciding to do this in their district. Especially struggling schools in rural areas that have no other options.

Akeret wants this film to have a lasting impact. The kind of impact that facilitates a conversation about the pros and cons of teachers as armed responders. This film is currently screening in NBC’s Meet the Press film festival in Washington, DC.