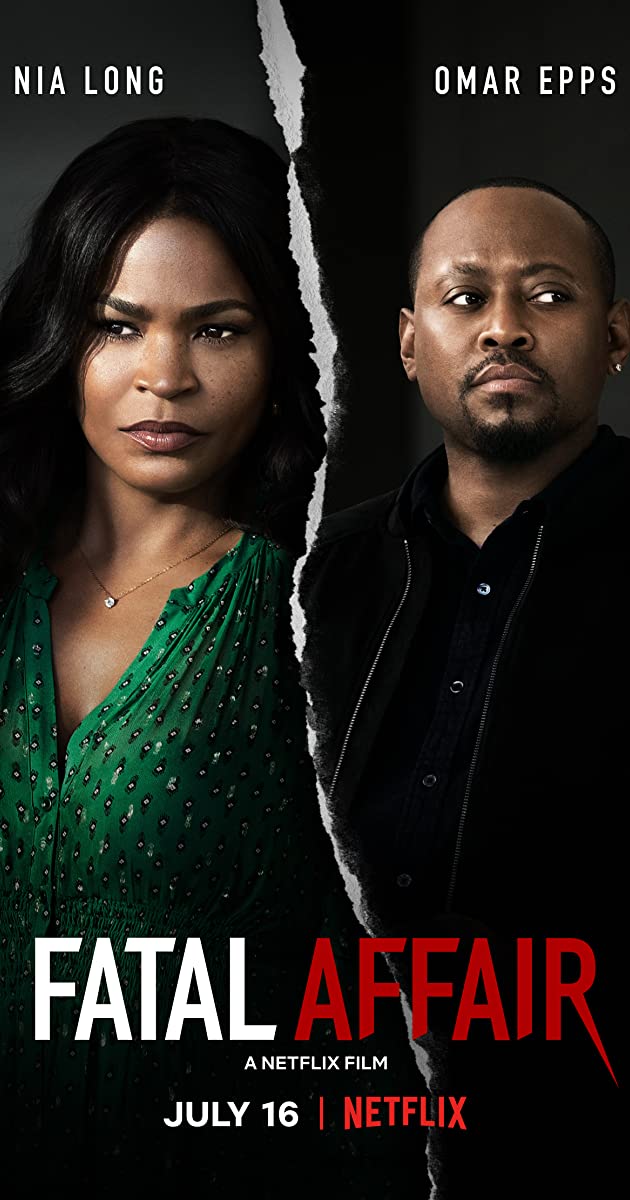 Movie Reviews on August 6, 2020 0Likes At The Movies
ShareTwitterFacebookInstagram

In Fatal Affair, attorney Ellie Warren (Nia Long) lives on the coast of San Francisco with her husband, Marcus (Stephen Bishop), and their daughter, Brittany (Aubrey Cleland). Marcus and Ellie are trying to strengthen their marriage while Marcus is recovering from being in a car accident.

Ellie’s boss at a law firm introduces her to the firm’s new technology consultant, David Hammond (Omar Epps). She is surprised because David went to college with her.

The two go out together to get drinks and catch up. Ellie even tells David she often feels like her husband is a stranger. Ellie and David go to a club and dance together. In the bathroom, they they begin kissing and almost have sex. Ellie stops it from happening and quickly leaves. Ellie knows that she is in love with her husband and begins ignoring David’s constant phone calls and texts. When she runs into him again, she tells him that she can’t spend anymore time alone with him because she is married. He keeps attempting to contact her, so she blocks his number.

When Ellie and Marcus invite her friend, Courtney (Maya Stojan) over for dinner. Ellie is surprised to see Courtney is dating David. Ellie pretends she doesn’t know him, and eventually informs him to make up an excuse to leave her house.

After David leaves a package of a record outside of her house, Ellie meets up with David and tells him to stay away from her, her family, and Courtney.

At Ellie’s law firm, Courtney angrily tells Ellie that David told her Ellie tried seducing her but he turned her down. Ellie tries telling her friend the truth about David, but Courtney does not believe her.

Viewers find out that David is in court-mandated therapy for anger-management after an incident with his ex-wife, Deborah. After visiting an old college friend, Ellie learns that Deborah and her new boyfriend were killed after she and David’s divorce. David broke into Ellie’s house, and watched her while she slept. He even hacked the club they danced in, sent her a video of them dancing together, and threatened to show Marcus. She follows him to the golf course where he is playing with Marcus.

Ellie persuades the concierge at David’s apartment to allow her inside. She finds pictures of her, her husband, and daughter on his computer. After getting out of the apartment, she calls Courtney to tell her that David is dangerous. With David back at home, he catches Courtney going through pictures of Ellie on David’s phone and attacks her. After Ellie finds Courtney injured and unconscious, the police assure her that they are looking for David. When she is back home, she tells her husband the truth about David.

David fakes his death by burning a homeless man’s body with a suicide note nearby. He even left a written confession to Deborah and her boyfriend’s murder in his apartment.

One night, Ellie gets a call from work requesting her to come in. She goes to work to find her assistant murdered. She calls the police and heads home, only to find Brittany’s boyfriend murdered as well.

David shows up at Ellie’s house and tries to persuade her to spend her life with him. She attacks him, only to find her husband and daughter tied up. After Ellie unties them, they find the officer on duty murdered. After a series of struggles with David, Ellie and Marcus, David takes the dead cop’s gun. The married couple run to the beach, with David close behind. David and Ellie struggle, but David is the one who falls off the cliff and dies.

The movie ends with Ellie and Marcus selling their house, and saying goodbye to Brittany as she heads back to college.

Lifetime Original Movies have very similar premises: A young woman encounters an antagonist with seemingly good intentions. As the story progresses, the woman figures out the person she thought she could trust has found ways to destroy her life. Her friends are put in danger once they try to warn her of the antagonist’s dangerous intentions. She is almost killed by the antagonist, but is able to overpower them. In the end, the antagonist ends up on the run, dead, institutionalized. The story often ends with the woman living the life she hoped for before the arrival of the antagonist.

When these movies involve a woman meeting a handsome stranger who she believes is something special, those around her try warning the woman of her new lover’s dangerous actions. He often ends up killing the woman’s friends, and attempts to kill her. She overpowers the man she thought she loved, often resulting in his death, institutionalization or imprisonment. These movies also involve a married woman with a family cheating on her husband, regretting the affair, but her lover not being able to let her go.Fatal Affair could have been portrayed on Lifetime. Many Lifetime Original movies can be entertaining and keep a person on the edge of their seat. They often consist of bad acting, cliche plots, and obvious story lines. The viewer can predict the upcoming happy ending early on in the movie. Fatal Affair was no

MANCHESTER BY THE SEA