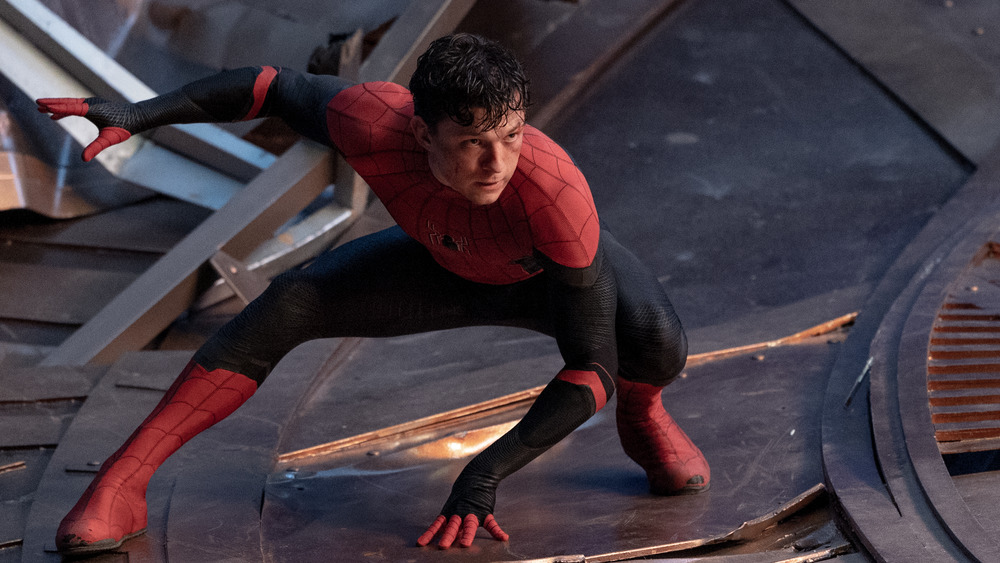 ‘SPIDER-MAN: NO WAY HOME’ Review: Tom Holland Puts The Cherry On Top Of His First Trilogy

Movie Reviews on December 14, 2021 0Likes At The Movies
ShareTwitterFacebookInstagram

2021 has been a rough outing for the MCU, at least in terms of the movies with the low-stakes “Black Widow,” uneven “Shang-Chi and the Legend of the Ten Rings,” and whatever “Eternals” was. After the MCU’s recent entries, it was hard to go into “Spider-Man: No Way Home” without expectations, and as MJ (Zendaya) says in the movie, “expect disappointment, you’ll never be disappointed.” “Spider-Man: No Way Home” swings past the subpar expectations the marketing had created, and surprisingly does not get in its own way, or tangled in its own web, to make perhaps the greatest live-action Spider-Man adventure yet.

Tom Holland is a great Peter Parker/Spider-Man, but legitimate questions about his range arise when the rest of his filmography — looking at you, “Cherry” — is taken into account. “No Way Home” is not just Holland’s best performance as the wall-crawler, it may just be his best performance to date. It finally feels as though progression is seen with Holland’s Peter Parker, granted, the high school stuff takes a major backseat, but Peter actually learns lessons in “No Way Home,” something the other entries in the “Home” trilogy have failed to portray. There’s noticeably less of the gawky moron schtick; as going to space and fighting Thanos will do, and it makes room for more range. Holland’s emotional acting is also on full display, specifically in a scene with a major death and a subsequent scene that sees him shed “tears in the rain” like Roy Batty in “Blade Runner.” Unlike former Spider-Man actor Tobey Maguire, it isn’t cringe-inducing when he cries, no offense, Tobey. Tom’s emotional scenes do have weight, and it’s not just because these are established characters that audiences have been following for a few years now. As an open Holland skeptic, this was a major step in the right direction of turning the page on the perception of the young actor.

Another actor who continues to impress is Benedict Cumberbatch, who is capable of so much more (just see this year’s “The Power of the Dog”) than what the MCU has provided him with. It’s not all on Cumberbatch that Dr. Strange’s run in the MCU started rough, but it’s simply puzzling when considering his résumé. With each appearance, Cumberbatch adds more and more charm to the (well, former) Sorcerer Supreme.

Zendaya, Jacob Batalon, and Marisa Tomei are all given so much more to do both emotionally and story-wise in “No Way Home” than their characters had in previous entries, but it wasn’t just the acting in this movie that was superb (especially for a superhero flick). The actual plot of “No Way Home” is handled far better than the marketing would suggest. The trailers made “No Way Home” out to be a mishmash of nostalgia; with theories going wild as to who was going to appear (still waiting for Reeve Carney’s closure). It’s not as if the plot can’t be reduced down to a game of “cops and robbers,” but there are decisions that lead to consequences that result in the (quite literal) open-world game of “Pokémon Go.” The first act begins as a chase to contain the “escaped inmates,” then the second act takes a heavy focus on a battle of morality before transitioning into its third act battle. It’s well-paced to the point that each act does feel distinct with none feeling like a clear odd man out. Simply put, it works, and hats off to Jon Watts for balancing all of the loose spider webs.

Even the comedy worked, veering away from the typical MCU quips that turn any scene with a semblance of emotion, serious, and includes some hilarious web-measuring jokes and potential foreshadowing. A joke from Happy (Jon Favreau) even references Marisa Tomei’s co-star from her Oscar-winning performance in “My Cousin Vinny,” Joe Pesci, while making a joke about “Goodfellas.”

The villains, as the anti-spoiler clip that played before the screening also acknowledges, are not spoilers, thus will be discussed in some detail. If you (somehow) didn’t see any marketing, I’d skip this paragraph, but the villains that were confirmed to return are Dafoe’s Green Golbin, Alfred Molina’s Doctor Octopus, and Thomas Haden Church’s Sandman from the Raimi “Spider-Man” trilogy and then Jamie Foxx’s Electro and Rhys Ifans’ Lizard from Marc Webb’s “Amazing Spider-Man” movies. While de-aging has been used in multiple MCU movies, it’s a sort of De Niro and Pacino situation from “The Irishman.” Molina’s de-aging looks fine in certain scenes, but scenes with bright daylight such as the one on the bridge seen in the trailers, make him look like a video game version of himself. Dafoe, on the other hand, looks great in his scenes. The cackle and wide-eyed looks are back in full swing (no pun intended), and Dafoe is the most engaging villain of the bunch. But it’s Foxx’s performance that is perhaps the most different from his last appearance, and the film acknowledges the change in appearance in a tongue-in-cheek way. It always was going to be Dafoe and Molina as the focal point, and Foxx is a pleasant surprise. Ifans isn’t given much to do, and it wasn’t even clear if Haden Church was even in the movie since he doesn’t appear in his human form for most of his scenes.

The big chase ultimately culminates at the Statue of Liberty, a perfect metaphor for second chances as the film points out. It’s hard to say that the third act battle isn’t “a lot,” as many MCU movies are (“Black Widow,” “Shang-Chi” to name a few, but it’s both a blessing and a curse. There isn’t much that can be articulated without spoilers, but it does feature some very unique move-sets and there is a brutality to certain sequences, something the previous two Holland-Spider-Man entries lacked. The movie also makes good use of its environment, utilizing cranes, scaffolding, and even the inside of the statue itself during the battle. It’s not necessarily the most memorable battle in most regards, but it’s a spectacle to get lost in if nothing else.

It feels like two-thirds of this review is still missing, but what can be said at this moment is that “Spider-Man: No Way Home” finally gave a satisfying Peter Parker adventure that felt unique. Yes, Peter gets a little help from his friends, but the outcome isn’t reliant on the Stark name, even if they still throw it around up to the final few scenes. Even Dr. Strange takes a backseat for much of the movie, including the final battle. The ending will likely upset some, but like Spider-Man’s webs, it (likely) won’t stick forever. But as it stands, it took a bold approach to Peter’s arc that will keep fans interested to see the continuation. It’s completely fair to say that it is only so bold because it will eventually be reversed, but I digress. Even more importantly, Tom Holland is actually allowed to act a bit and remind everyone why he belongs in the conversation as one of the great young actors currently working and not in “Chaos Walking” or “Cherry.” As someone who feels as though they grew out of enjoying Marvel movies, “No Way Home” is able to bring out the nostalgia that filled childhoods everywhere and has been missing from recent superhero movies.

“Spider-Man: No Way Home” swings into theaters on December 16.

Review: ‘THE ADAM PROJECT’ A Step Up from ‘FREE GUY’