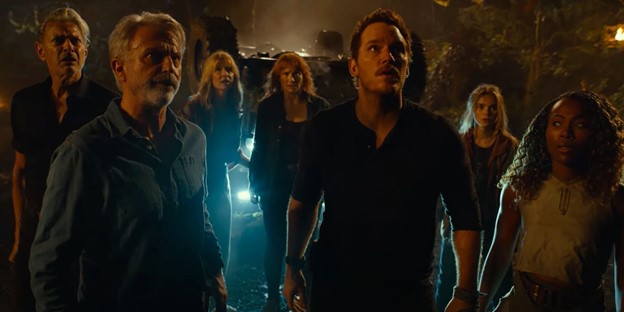 A few weeks ago, I put all bets on the table regarding what the highest-grossing features of the film will turn out to be. Safe to say, the predictions are already off to a strong start, thanks to a stunning breakout with Top Gun: Maverick. The Tom Cruise movie earned $160.5 million domestically at the Memorial Day box office and showed no signs of slowing down while already flying past $540 million worldwide in its second weekend. Granted, Doctor Strange 2 and The Batman were no-brainers as they are A) part of the superhero genre and B) put magnetic products on the big screen.

Technically, we could veer off-topic to recognize that Tom Cruise’s fallout (pun intended) from pushing back all his films in the 2020/2021 pandemic season became a blessing in disguise. Now, Cruise is oozing with momentum, as the trailer for Mission Impossible: Dead Reckoning Part 1 dropped before Maverick’s release. Maybe a topic to discuss for another day as this time we’re evaluating why Jurassic World 3 (or Jurassic Park 6) is poised to go the distance to battle it out for the top spot this year.

Dominion has already dropped into 15 overseas territories this weekend in preparation for its global launch next weekend. It scored a near-record $6 million opening day in South Korea and an $8.1 million weekend total in Mexico. It racked up $56 million for the first slew of markets, synonymous with its predecessors, Jurassic World’s $47.3 million and Fallen Kingdom’s $59.8 million. Once it moves into the June 10th weekend, Universal’s latest motion picture will distribute to North America, China, and the rest of the world. Projections show it’s looking at a $160-210 million opening weekend domestically, on par with Black Panther, The Avengers, and Jurassic World. And if we’re being more insightful, its two recent predecessors earned over a billion dollars worldwide despite mixed reviews.

Anyone who has witnessed the history of modern sci-fi knows that Steven Spielberg’s Jurassic Park easily ranks as the best offer. But its two sequels fell apart in terms of storytelling and personality, despite CGI taking a step up. Many years later, Jurassic World sharpened its teeth as a popcorn blockbuster that earned a shocking $1.671 billion worldwide. Fallen Kingdom stepped away from the park to a lively darker tone but still reeked of desperation due to underdeveloped beats and cohesive storytelling (even when amassing $1.31 billion).

Now since the fallout from the last feature, dinosaurs roam freely in the world, leaving it as an actual battle between humanity and the fearsome creatures. Chris Pratt and Bryce Dallas Howard return from the last two films, alongside the former players of Jeff Goldblum, Laura Dern, and Sam Neill. Colin Trevorrow, the director behind the first Jurassic World, returns to bring a realistic nature of how humans will live in this new world with dinosaurs while trying to close out this entire series on a high note. Oh, and Chris Pratt stated that it feels very reminiscent of how Marvel brought everyone in for Avengers: Endgame, particularly the third act where the heroes from across the universe battle Thanos and his armies.

When looking at the statistics, it’s an assurance that Dominion will be pushing past $1 billion as quickly as possible before it continues climbing up the ranks further. Reviews, COVID, the summer rush, and (unquestionably) nostalgia will influence how it legs out for the remainder of summer.

Oh, and hefty competition, particularly with Pixar’s Lightyear dropping a week after and Minions: The Rise of Gru three weeks later. Fallen Kingdom had to push along with Incredibles 2 right by its side before getting hit with Ant-Man and the Wasp two weeks later and Skyscraper three weeks later. In Dominion’s favor, it will tout to fewer families and kids before Thor: Love and Thunder takes its elite spot a month later.

If it legs out similarly to its predecessors, we could be looking at a global cume between $1.4-1.7 billion. A heavier hit by the upcoming blockbusters may put it closer to Fallen Kingdom than Jurassic World 1. Still, I’m skeptical that with the commitment by Universal to wrap this up as a mega finale, it should be leaning towards higher earnings.

If it breaks a billion dollars, the (hypothetically-speaking) only films this year that have a chance to break it are the other two upcoming Marvel titles (Thor 4 and Black Panther 2), Lightyear, Minions 2, and Avatar 2. The MCU titles have solid worldwide recognition, so seeing them beat out their predecessors is not far-fetched. Thor 4 can quickly dispatch Ragnarok’s $854 million, while Black Panther 2 may reach its predecessor’s $1.348 billion. Meanwhile, young Gru and minions may come close to Minions’ $1.159 billion gross, but we’ll see how much it can handle the heat with Chris Hemsworth’s (muscular) return to screen the following weekend. And Lightyear will rely on the Toy Story IP and families for a shot at breaking the barrier.

But the biggest story has yet to come. The world of Pandora returns after thirteen years, and many are exuberant for the next adventure, especially as its predecessor is the highest-grossing film in history (not counting inflation). Plus, it’ll have the entire holiday season to leg out spectacularly (a la Star Wars 7 and Spider-Man: No Way Home) to send James Cameron and Co. more paychecks. A re-release for Avatar will occur again in September, maybe giving a chance for it to reach $3 billion worldwide, so Disney still ballyhoos about “the sequel to the highest-earning film ever” for Avatar 2’s release. Will Avatar 2 come close to its predecessor? Most assuredly not. A $1.5 billion gross is admirable, with a $2 billion+ total not out of the question. At least all parties can relish knowing the forthcoming three follow-ups have excitement behind them.

Dominion has a rare possibility to capitalize on the summer breeze despite not having the Christmas advantage and becoming hit by blockbusters left and right. However, it should be in the top-5 list if it underperforms once the year closes out. If it overperforms, it might challenge Avatar 2 for the top two spots (assuming Black Panther: Wakanda Forever doesn’t outperform its predecessor in some shocking fashion). And even considering China (even though that should stay out of the question by now), Dominion probably still has better potential with the dino-IP and nostalgia onboard. Beware, both predecessors earned over $210 million in their theatrical runs whereas Avatar had to release thrice in China to get over $260 million and reclaim its box-office king status from Endgame in 2021.

Maybe the speculation is too far-fetched, but in practical terms, once Jurassic Park 6 passes $1 billion, it only must confront those titles mentioned above for the top spot and James Cameron’s sequel. If it draws $1.5 billion, it only has Cameron and Marvel to contend at the top of the ladder. But, of course, we’re still guaranteeing it lands in the top-10 list, reviews notwithstanding, and it can only get better once it drops worldwide on June 10th.

Calling it now: Jurassic Universe or Multiverse will be upon us in 2030.