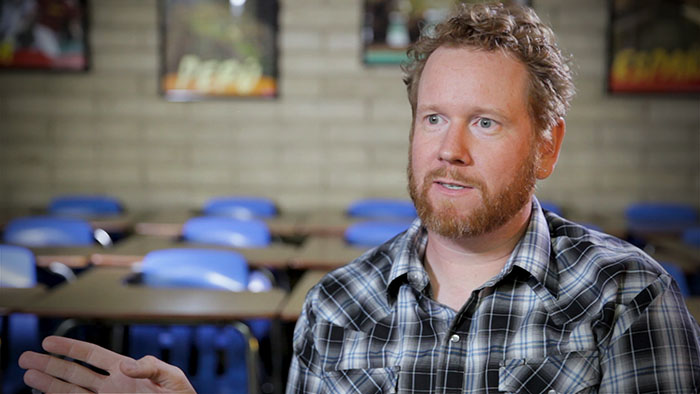 Reel 2 Real on August 27, 2018 0Likes At The Movies
ShareTwitterFacebookInstagram

Todd Berger has been a fan of implementing adventurous elements into films. He started as a little boy independently writing and acting. Berger teamed up with Dee Austin to write this script. This script has been long awaited but will still add to the puppet movie genre. The film follows Detective Phil Philips who use to work for the Los Angeles Police Department and teams back up with his human partner (Melissa McCarthy). The Happytime Murder is a film that will make you relax and laugh.

ATM: Express to us how you were able to fall in love with films and writing for them.

TB: I went to the movies like every weekend with my parents as a kid. I had lived in New Orleans. The weather was very hot. The movie theaters had an air conditioner. My father had a large movie collection. He kept a lot of our favorite movies. I watched the Gremlins and Goonies countless times. I was nine when my father got a video camera. I started to play with it. He would do little skits with us around Christmas time. I had fun playing elves. I made videos with my friends for fun. A friend who lived down the street and I had a talk show together. I realized this was my hobby. I reached an age to do it as a living.

ATM: What do you expect the average moviegoer to receive from your film?

TB: They are going to laugh. This is a film you go see after a long day and want to watch a big dumb comedy. This comedy is really fun, raunchy, and goofy.

This was my objective. People can also drink a cocktail or smoke before coming to see it. It is a funny movie. These kinds of movies are important. Go have a good time. If you like the trailer, then you will like the trailer.

ATM: Do you feel this movie sends the message that puppets are not just for kids, but also adults? There is a big stigma against adults indulging in themes that are supposedly geared toward children.

TB: People assume they are just for children. For years animation was strictly for children and eventually became popular for adults. There are shows like South Park, Big Mouth, and other shows. These shows are not for kids and made to entertain adults.

TB: Exactly. There should not be any judgment. Just have a good time and laugh.

ATM: Describe some of your hilarious moments associated with the script.

TB: We did a round table with a lot of comedians and comedy writers. Everyone sits in a conference room and read through the script. A lot of Hollywood and big movies follow this format. People laugh, and we talk about the funny scenes in the script. The production company brought in a lot of puppets. We tried to figure out where to put the puppets if two people were walking down the street. The puppet could be a hotdog puppet. The hotdog puppet could be protesting at the hot dog stand. This was fun.

ATM: Explain what your writing for this movie says about you as a screenwriter.

TB: This is a really good question. (Laughs). I like to write things that are different than other things written. I have written children entertainment and Kung Fu Panda short films. The Happytime Murders started as more of a straightforward satire. The comedy came from the taking everything seriously. The first look at the script read like a thriller. Through the years the film evolved into a funnier and joking film. This was an interesting challenge for me. I wanted to make it fun and entertaining. I have never written anything like this before.

ATM: Hypothetically, imagine you are at a convention or school. You are telling children about your career as a successful Hollywood screenwriter. There is a child in a seat that raises their hand. They express to the room about why you inspire them. What about you would make them feel the need to say you inspire them?

TB: Hmm. I believe you have to write all the time. This goes for whether you are getting paid for it or not. I was writing scripts at 12. I wrote my first feature film at 14. I made movies with my friends. I still write for fun on the weekends. I write novels that one day I’ll make as an indie. I have paid writing jobs now. You have to look at a job as a hobby. If you can combine your job and your hobby, then you will live a happy life. This would inspire someone at a young age. They would see there is enjoyment with things getting paid for. This is a lesson for everyone.

Laughter is always healthy for everyone. Screenwriting can influence any moviegoer to have a great time. Berger is currently working on a film to star Morgan Freeman. The Happytime Murders is now in theaters.

A Whale of a Tale Documentary